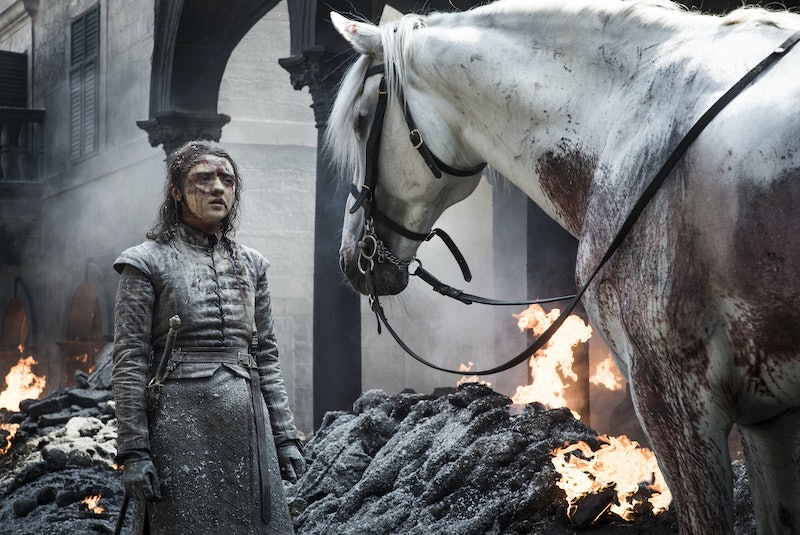 Arya may have defeated the Night King, but the leader of the dead definitely wasn't the only person to ever fall victim to her wrath. Ever since Ned Stark lost his head, Arya's made it her mission to exact vengeance on those who have wronger her family. So when the opportunity came for her to remove one more target from her list, you'd think she would've jumped on it, but she didn't. So why didn't Arya kill Cersei on Game of Thrones? The youngest Stark sister faced an important crossroads in her storyline and her decision shows a side of her we haven't seen in quite a long time.

During the Battle of Winterfell, the Red Woman reminded Arya of what she'd told her many years ago — that she would shut many eyes forever, including brown eyes, blue eyes, and green eyes. The blue eyes were definitely meant to symbolize her takedown of the Night King; however, many fans thought that the "green eyes" remark meant that she'd finally be able to check Cersei off of her list as well. Yet that's not how this all ended up playing out. Sure, Arya probably could've tracked Cersei down if she'd really wanted to — she was right there, after all, already inside of the Red Keep. And yet she opted to turn around and head in the opposite direction. But why?

For the last several years, Arya has let killing and revenge be her main source of motivation. In fact, sometimes fans have undoubtedly worried that her darker impulses and thirst for vengeance would make her go too far — a trait that she has in common with Daenerys. But it was in this moment, when she let the Hound convince her not to go after Cersei, that we saw her humanity return in full force. Unlike Dany, who opted to ultimately give into those dark urges, Arya realized that life was about more than killing and she choose to try and help others escape the carnage of King's Landing rather than carry out her own personal agenda.

The Hound has seen firsthand what Arya has become capable of, seeing more and more of himself in her as time has gone on. But he doesn't want his life for her. He loves Arya as much as he's capable of caring about someone else, which is why he doesn't want to see her die when she doesn't need to. Cersei's death was imminent and it didn't need to be by Arya's hand, especially since it probably would've also killed her in the process.

"It's a small scene, but it's also for us one of the most important scenes in the whole episode because it's the culmination of their story together," showrunner David Benioff explained during the show's weekly "Inside the Episode" discussion, regarding that final scene between the Hound and Arya inside the Red Keep. "The road to vengeance always ends in one place, which is what the Hound is saying to her here. 'I've made my choice a long time ago and this could only end in one possible way for me, but for you, you have so many other options.'"

Dany also had an option. She didn't need to kill all those innocent lives and become Queen of the Ashes. But she also didn't have the strength to stop herself. Arya has lost many people that she loves and has killed more enemies than she can count. Yet when given the chance to choose life over death, she took it. For the first time in a long time, she opted to run away from killing instead of running toward it.

Arya realized that there's more to life than her vendetta — or at least she did until she saw firsthand what Dany's unnecessary wrath was doing to hundreds of innocent people, which makes you wonder — perhaps it was never Cersei's green eyes Arya is destined to shut. Maybe it was always meant to be the Mother of Dragons.