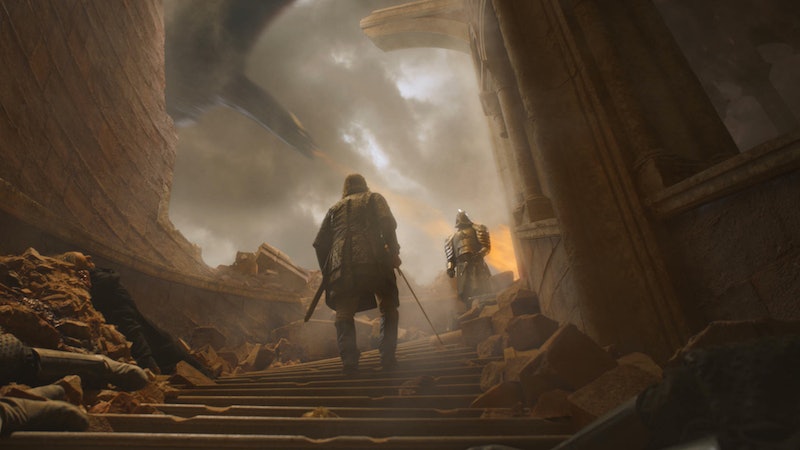 Spoilers ahead for Game of Thrones Season 8, Episode 5. After a two-year wait, fans finally got their wish for the Clegane brothers. That's right, the Cleganebowl finally happened on Game of Thrones. Sandor Clegane (The Hound) and Gregor Clegane (The Mountain) may be brothers, but they've been at odds with each other since the beginning of the series. And after they reunited at the tail-end of Season 7, fans knew it was only a matter of time before they met up again for an epic showdown — two giant soldiers who seemed hell-bent on destroying each other. And they did, with both men falling off the walls of the Red Keep into the fire down below.

As The Hound told Gregor in the Season 7 finale, "That's not how it ends for you, brother. You know who's coming for you. You've always known." This sparked fans' imaginations that there would be a reckoning for the two Clegane siblings — the "Cleganebowl," if you will. And whatever you thought of the March 12 episode, it certainly delivered on that promise.

The Hound encountered his brother in the crumbling Red Keep, where he was guarding Lord Qyburn and Cersei. "Hello, big brother," Sandor said. But after the brothers began fighting, it soon became clear that The Mountain couldn't be killed with a sword — The Hound's multiple stab wounds only momentarily slowing his giant, zombie-fied brother down.

Despite this, they both got in some impressive fighting — which happened on a stairwell, by the way. The Mountain even incorporated what you could call his signature move, which is gouging his opponent's eyes out, which was a brutal scene to watch. He did the same thing to Oberyn Martell back in Season 4, which left both parties either dead (Oberyn) or turned into a zombie by Lord Qyburn (The Mountain). Since then, Gregor has stalked silently around, staring out of his mask, which only partially obscured his horrifying features. As The Hound told his brother back in Season 7, "You're even f*cking uglier than I am now."

And fans finally got to see The Mountain's face when his helmet was ripped off during the Cleganebowl. And the results had fans pointing out that he looked kind of like Varys — if he'd been brought back to life, that is (because RIP Varys).

Furthermore, this one-on-one combat between brothers was a long time coming. In fact, audiences learned about their tragic backstory all the way back in Season 1. As Littlefinger whispered to Sansa during a jousting tournament, "The Hound was just a pup. Six years old, maybe. Gregor, a few years older — already a big lad, already getting a bit of a reputation. Some lucky boys just born with a talent of violence. One evening, Gregor found his little brother playing with a toy by the fire — Gregor's toy.... Gregor never said a word — he just grabbed his brother by the scruff of his neck, shoved his face into the burning coals, held him there while the boy screamed, while his face melted."

During that same tournament, the two brothers came to a head. Gregor tried to kill his opponent, the Knight of Flowers, but The Mountain stopped him. And while The Hound has always been a bit of a shady character, he's long been on the side of good. Not only did he feel protective of both Arya and Sansa (a bit too protective, in Sansa's case), he seemed to know that they would both die trying to kill each other.

So it felt kind of karmic as The Mountain and The Hound fell together to their deaths — two equal and opposing forces who eventually destroyed each other.