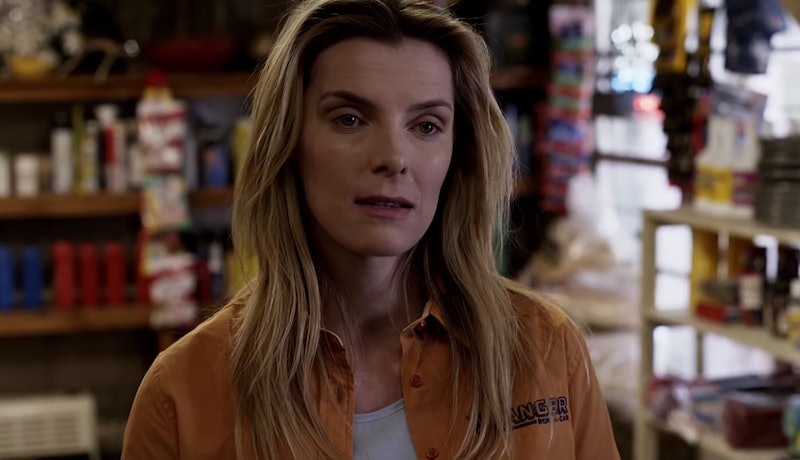 There's horror and then there's horror. A new trailer for The Hunt, starring Betty Gilpin, Emma Roberts, and Hilary Swank is the latter, and you'll know just by watching the first 30 seconds of the preview. It follows a depraved game of cat and mouse that begins when 12 strangers find themselves in a clearing without any idea how they got there. And that's when they start being hunted like animals. Hilary Swank plays the mastermind behind the mayhem, and unlike Jigsaw in Saw, she's not hiding behind a creepy mask.

Update: Universal announced on Aug. 10 that it has decided to cancel its plan to release the film. In a statement, the studio said: "We stand by our filmmakers and will continue to distribute films in partnership with bold and visionary creators, like those associated with this satirical social thriller, but we understand that now is not the right time to release this film."

Earlier: The Hunt definitely looks like a twisted, adult version of The Hunger Games, only instead of hunting each other, these innocents are being hunted. On the bright side, however, just like The Hunger Games had Katniss, The Hunt has Betty Gilpin's character. In the trailer, Gilpin is shown walking into a drugstore, asking where she is. Unsatisfied by the answer, she expertly murders the two people working there. Is she some kind of assassin? It sure seems so in the mysterious trailer. And that means that those victims of this "Hunt" might just have some hope for survival.

There's another aspect of The Hunt's plot that makes it even more similar to The Hunger Games, and that's the differences between the hunters and the hunted. As the trailer purports, Swank's character has set up the game so that the wealthiest people in the world are the hunters, kind of like how the Hunger Games was all set up by the Capitol, where the dystopian nation's richest and most powerful lived.

"It's just business, hunting human beings for sport" one of the wealthy hunters says in The Hunt's trailer. Then, Swank's character says, "They're not human beings," before laughing wickedly. That, of course, opens up a lot of possible theories for what The Hunt could be an allegory for. With the U.S. president's frequent use of arguably dehumanizing language to describe people of color as well as the ever widening gap in the U.S.'s wealth inequality, it might just be a social commentary.

It doesn't seem like The Hunt touches on issues in racial inequality, though, as most of the people deemed prey are white. Besides Roberts and Gilpin, other members of the group being hunted include This Is Us's Justin Hartley, Ike Barinholtz, Amy Madigan, and more.

On Twitter, many have been quick to point out that The Hunt seems reminiscent of The Most Dangerous Game, a 1932 film based on a 1924 short story of the same name written by Richard Connell. But as mentioned before, the story might be so relevant now that it warrants a re-telling today.

The new film will definitely have a modern update to anything from the 20th century too, because The Hunt's official description states that it all unfolds "In the shadow of a dark internet conspiracy theory," per Collider. Clearly, there's a lot that the trailer doesn't cover — but one thing is for sure, and that's that Betty Gilpin's character will likely come out a hero, like Katniss.

More like this
These 25 International Horror Movies On Netflix Prove Fear Is A Universal Language
By Bustle Editors
Paul Mescal, Man Of Mystery
By Samantha Leach and Heather Hazzan
12 ’90s Movie References You Missed In 'Do Revenge'
By Radhika Menon
What’s New On Netflix: Ana De Armas’ 'Blonde' & A Nick Kroll Special
By Arya Roshanian
Get Even More From Bustle — Sign Up For The Newsletter