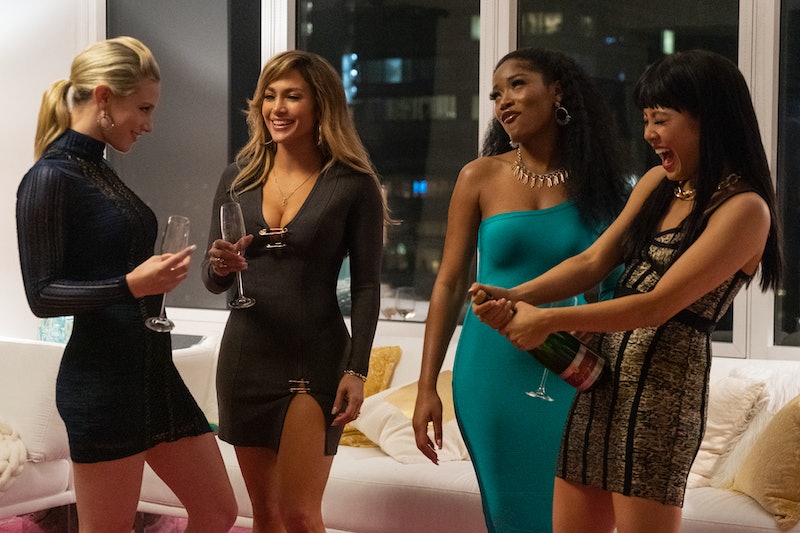 It can be incredibly frustrating to be a woman in 2019, which is why it's so cathartic to watch women fight back against injustices onscreen. At the movies, women aren't just looking to get what the men have. They want revenge, too. Last year's Widows, plus the upcoming Hustlers and The Kitchen, prove that women are pissed off and teaming up to get even with the men who have wronged them. As they take on their own husbands, boyfriends, and clients, they're also battling the patriarchy in general, providing a feeling of solidarity that bleeds into our real-world fights.

One of these films in particular isn't all that far removed from reality. Based on Jessica Pressler's 2015 New York Magazine article "The Hustlers at Scores," Hustlers, opening Sept. 13, stars Jennifer Lopez, Constance Wu, Keke Palmer, Julia Stiles, Lili Reinhart, Lizzo, and Cardi B. The article inspired a lot of conversation about a group of strippers who decided to take advantage of the sleazy, rich men who frequent their club, and seemed perfectly poised for a movie adaptation. "Those Wall St. guys," Lopez's character Ramona says in the trailer, recruiting the others, "you see what they did to this country? They stole from everybody. Hard working people lost everything. And not one of these douchebags went to jail."

Ramona's frustration with the way that the financial crash of 2008 was handled will ring true to those in the audience who still feel that the men in positions of power in the financial sector — the same financial sector that makes it so that women earn less than men on average — weren't adequately punished for their crimes. Author Jay Newton-Small argues in her book, Broad Influence: How Women Are Changing the Way America Works, that "more women on Wall St. could have prevented the financial crisis," citing neuroscience studies pertaining to men's tendencies toward taking greater risks and women's relative levelheadedness.

And while finance is still dominated by men, it's mostly women who are still feeling the effects of the recession, writes Melanie G. Long at Salon. Women in general earn less and borrow more. So it's no wonder that the women in Hustlers set out to take money from the rich and give to themselves, as so-called "stripper Robin Hoods." Playing by the rules, it seems, would have gotten them nothing.

Fictional tales of women looking for their paydays and payback have found their home on the big screen as well. Straight Outta Compton screenwriter Andrea Berloff's directorial debut The Kitchen opens Aug. 9 and is based on a comic book miniseries of the same name by Ollie Masters and Ming Doyle. It stars Melissa McCarthy, Elisabeth Moss, and Tiffany Haddish as a trio of wives whose mob husbands end up in prison. While on their own, they quickly discover just how much the world — in their case, '70s New York City — caters to male needs and considers women second-class citizens. "Most employers don't want mothers," McCarthy's character hears during a job interview. Even when these women try to make money through legal channels to try to keep their families afloat, they're told it's not an option.

While Roe v. Wade and Title IX had already hit the books by the time the action of The Kitchen starts, the women still face discrimination, even in the "family" structure of the organized crime their husbands are a part of. The paltry and demeaning "allowance" they're given won't cut it, so they take over the streets of Hell's Kitchen for themselves.

Because the patriarchy pervades even the underbelly of society, these wives can't get by without turning to the same tactics for which their men were put away. They resort to murder, theft, and aligning with other mobsters just to survive, yet grow to enjoy their newfound power and influence as well. Their actions are borne of necessity, but their fight turns into one for equality as well as dominance — a battle that rages on after their husbands are released and they're expected to go back to the other kind of kitchen.

The Kitchen has a lot in common with 2018's Widows, which stars Viola Davis, Elizabeth Debicki, Cynthia Erivo, and Michelle Rodriguez as a hastily pulled together gang who attempt to pull off a heist after Davis's character's husband and his crew die doing a job. The straits are a little more dire for the women of Widows; their husbands are dead rather than in prison, and they're forced together because of a threat from the gangsters their men ripped off.

Yet, the threat of violence isn't all that drives the widows. They're doubted, disregarded, and disrespected to the point of action. "The best thing we have going for us is being who we are," says Veronica (Davis) in the film. "Because no one thinks we have the balls to pull this off." They use the fact that they're underestimated against their enemies; their grief turning into rage that men have left them cheated, broke, in danger, and unable to dig themselves out of a hole without taking drastic action. Their revenge is an example of the adage, "you reap what you sow." The men in their lives — both the ones they loved and their opponents — created the world of crime in which only they benefitted, so now they have to pay the price.

So why are these revenge fantasies happening in the movies right now? The president has been accused of sexual assault by multiple women. Members of congress have relayed stories that seem to show that our legislative branch is still plagued by sexism and discrimination. Restrictive anti-choice laws are hitting the books in multiple states. Yet, women still fight. Sure, we have to wage these battles through protest, lawsuits, and voting, among other tactics. But perhaps watching fictional women take more drastic measures is cathartic. It feels good to watch these characters hit back against sexism with rage and violence, even if we'd never consider that ourselves and believe that other methods are more productive in the real world.

One lesson we can reasonably take from these movies is that we have to organize to get stuff done. Other revenge movies, such as Kill Bill, Molly's Game, and Peppermint, showcase a woman going it alone to varying results. But women in the real world already know that solidarity is key to success. So why not show that camaraderie on screen?

"There is power in the pack," writes Shelley Zalis for Forbes, challening the idea that women should compete with each other for the few positions of influence they're allotted. "The truth is that raising each other up and channeling the power of collaboration is truly how we’ll change the equation." The women of Hustlers are coworkers, the women of Widows are practically strangers, and the women of The Kitchen are friends, but no matter how well or how little these women all know each other before they take on their mission, they all quickly realize that sticking together gets them what they want.

Taking down sexist systems of oppression, be they financial, physical, or otherwise, isn't done by setting off flashy explosions or living the high life. But these wish fulfillment plots have the potential to give women in the audience a much-needed power boost to keep on fighting the good fight.

More like this
Twitter Is Identifying With Sally Field & Jane Fonda’s Friendship In New Viral Video
By Jake Viswanath
24 History-Making Black Women You Probably Didn't Learn About In School
By Ayana Lage and JR Thorpe
25 Inspiring Quotes From Black Women To Celebrate Black History Month
By Kyli Rodriguez-Cayro and JR Thorpe
Vanessa Hudgens Is Reportedly Engaged To Cole Tucker
By Jake Viswanath
Get Even More From Bustle — Sign Up For The Newsletter
From hair trends to relationship advice, our daily newsletter has everything you need to sound like a person who’s on TikTok, even if you aren’t.