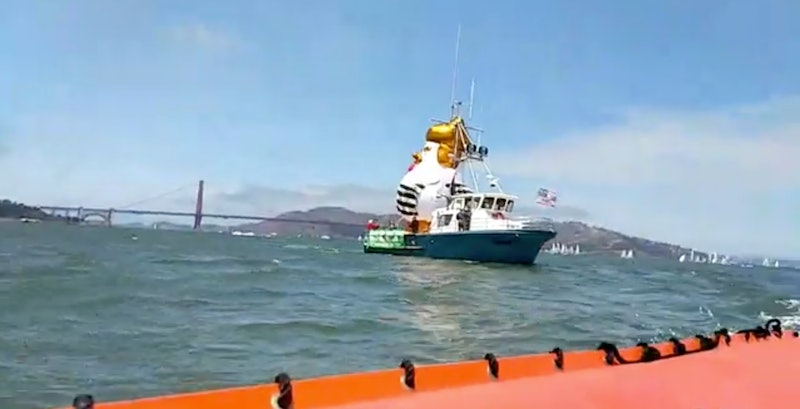 The nation's most notorious criminals were once held at Alcatraz, in the San Francisco Bay. Now, protestors are trying to make the argument the country's political leader should head there too — or at least a big chicken version. An inflatable Trump chicken balloon dressed like a prisoner will sail around the bay on Sunday.

There was a test run on Saturday, when the balloon — dressed in black and white stripes — circled Alcatraz, or "the Big Coop" as organizers call it. "After the week the world has had, we all want to see Trump in jail," the organizers wrote on their GoFundMe page. "Yet we know the wait is long, too long. In the meantime, how can we let out our frustration about everything that seems so ruined and wrong?"

The plan was to give the public a release for their frustration against the president. The organizers suggested shouting things out at the "33-foot bird in his Prisoner45 shirt" as he goes by. They noted that it's a way to honor the First Amendment as well, even as the president attacks the press as "Fake News." The organizers on the GoFundMe wrote:

You can mock and squawk and swear like you’ve never sworn before in a proud expression of your First Amendment right. Bring your friends. Make some signs and banners. Wear costumes. Dance. Everyone remember we’re still free.

The bird Trump balloon first made its debut in San Francisco for the Tax March in 2017, and then it had an appearance at the White House, showing up in some wide shots of the White House.

This is not the only floating Donald Trump look-alike as of late. The Baby Trump balloons from London's anti-Trump protests have also drawn a lot of attention, both in the U.K. and on this side of the Atlantic.

The organizers there have decided they'll try to send their Trump balloons to wherever a protest is needed and have raised money to do so. "We've had countless requests for Trump Baby to visit countries all over the world under threat from a visit from the orange terror," the fundraiser page for the original baby balloons reads. "So — let's fund a global travel fund for Trump Baby and ensure a global rolling trolling of everyone's least favourite pop-up tyrant. The more generous donations we receive, the more places Trump Baby can go!!!"

There are at least two appearances expected stateside. One is in New Jersey near the golf course the president owns, where he regularly vacations in the summer. The local protesters plan to fly it whenever the president is in town, and given their regular protests of the club, they are certain they can get it close enough that Trump might see it.

The other location is in Washington, D.C. for the military parade. An organization called CODEPINK is raising money to have the Baby Trump balloon fly during the parade in November. They're also organizing a peace concert the night before.

If you're in San Francisco, it's not too late to participate. The organizers, according to their Facebook post, want you to come down and yell at the chicken version of the president. "If you can’t contribute money, we need your voice at the water’s edge," the Facebook event description read. "Come one and all to the Eastern Shore of San Francisco Sunday 11:30 to 3 to speak truth to poultry."

And if you're not in the area, you can support the initiative from afar; the $4,000 goal set by organizers online has not been reached. And the Facebook live feed lets you feel like you're there.

More like this
Prince William Condemns “Unacceptable” Comments Made To A Black Guest At Buckingham Palace
By Shahed Ezaydi
Joe Lycett Just Took HIs David Beckham Qatar Protest To A Whole New Level
By Sophie McEvoy
Footballer Jake Daniels Shared His Thoughts On A World Cup Boycott
By Sam Ramsden
Iran Has Issued A Death Sentence Over Mahsa Amini Protests
By Catharina Cheung, Darshita Goyal and Maxine Harrison
Get Even More From Bustle — Sign Up For The Newsletter