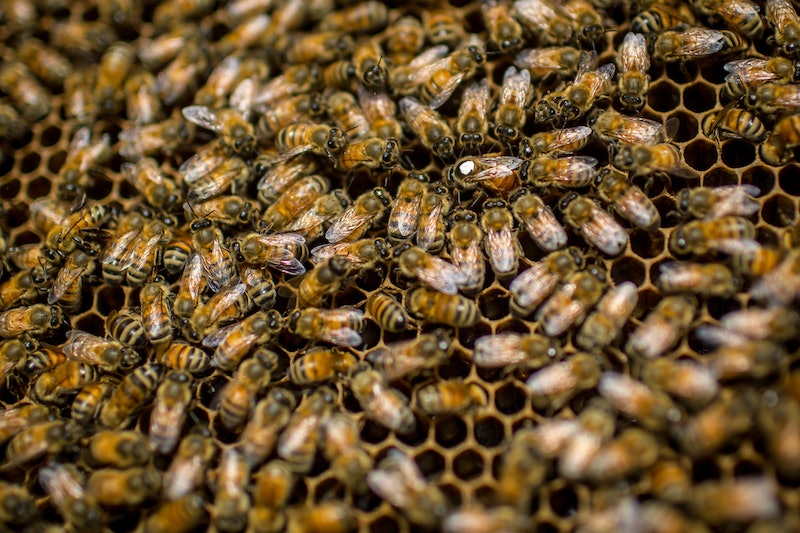 The next time you come across an insect, don't squash it. As much as you might cringe at its presence, that tiny antennae'd creature with (probably) more legs than you has a big role to play on the planet. And it benefits you, the human! So if you want to keep frolicking through fields of flowers for your Instagram don't. Squash. The bug! This rule of thumb is more important than ever now, as according to new reports, the insect population is dwindling rapidly — which would absolutely wreck the Earth's ecosystem if it got farther. The good news is that we can help stop it.

Don't get me wrong: I don't want ants showing up without an invite to my picnic and helping themselves to the cucumber sandwiches, and I'd rather not consider a cockroach as my third, fourth, or hundredth roommate (depending on how many of them there are in the apartment at a given time). But based on current ways insects are being controlled, their populations are spiraling to extinction and it's not good. Thankfully, there are natural, no-kill ways to take control of any insects that creep into your home and life.

Doing so without killing the insects is important: Scientific journal Biological Conservation published a new report this week that opens with the harrowing sentence, "biodiversity of insects is threatened worldwide." See, without insects, Earth's ecosystem will collapse. And that would not be a good thing.

According to the report, as much as 40 percent of insect species worldwide could face extinction. Authored by Francisco Sanchez-Bayo of the University of Sydney, Australia and Kris Wyckhuys of the China Academy of Agricultural Sciences in Beijing, the paper details that a decline of insect populations would introduce dramatic changes to the world's ecosystems.

So, how can we, humans, help? It could be as sumple as updating the way we eat and obtain food. An abstract for the report rounded up four major factors in the population decline of insects, including habitat loss due to intensive agriculture and urbanization, pollution often caused by pesticides, introduced species and, of course, climate change.

Sanchez-Bayo and Wyckhuys suggest, "A rethinking of current agricultural practices, in particular a serious reduction in pesticide usage and its substitution with more sustainable, ecologically-based practices, is urgently needed to slow or reverse current trends." The planet can be saved. Insects keep soil healthy and happy. They pollinate plants. They even control invasive pests! Keeping them alive by changing our ways is crucial. Let's keep fields colorful, shall we?

This isn't the first time we've been warned about the turmoil that'll reign if insects are wiped out. Honey bee populations have been declining. According to Bee Informed per The Honey Bee Conservatory, "44 percent of beekeeper colonies were lost in the United States between 2015 and 2016." Efforts to save the honey bee population swooped into action. Now, the same attention needs to be called upon for all insect species.

Be conscious of the food you're purchasing at the grocery store. A farm free of pesticides that joins forces with insects instead of eliminating all of them with chemicals is a sustainable one. And choosing produce from there could contribute to a healthier, abundant future.