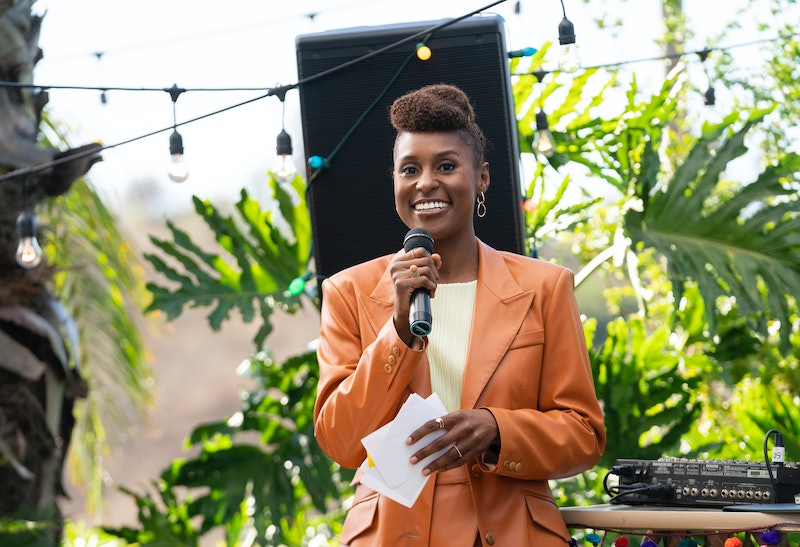 In the final moments of the third episode of Insecure Season 4, an unmistakable beat kicks in just as Lawrence slides into Issa's DMs. Then come the lyrics that almost anyone who was listening to music in the early 2000s could identify. "It's after midnight, and she's on your phone..." The perfectly fitting song, of course, was Mya's hit "Case Of The Ex (Whatcha Gonna Do)," which Issa Rae later tweeted she "could not resist" placing in the episode.

Rae contributes much more to the music in the HBO series than her mirror raps, and this being just one example of how much thought she has put into the Insecure Season 4 soundtrack. Working closely with music supervisor Kier Lehman and composer Raphael Saadiq, the creator and star curates a Spotify playlist that gets an update after each episode airs on Sundays.

The May 3 Insecure episode adds even more bangers to the collection. After her headliner ScHoolboy Q dropped out at the last minute, a desperate Issa briefly considered DM'ing Beyoncé before turning to Google to find "local LA artists" and checking out Roc Nation artist Mustard's Instagram page.

Off screen, that's the route Rae generally goes in putting a spotlight on lesser-known artists and selecting new music for Insecure. In an April interview with Hypebeast, she said she's "very, very hands on" with music selection and credited Lehman with putting her on to "new stuff." Rae added that he'll send her anywhere from 30 to 60 tracks, and she'll leave notes about what songs would fit or what vibes she's feeling.

"Right away in Season 1 he asked me what kind of vibe I was looking for in the show and I told him I wanted female energy, I wanted LA energy and I wanted to support independent artists," Rae explained to Hypebeast. "I wanted to use good music. And since then he’s been feeding that. It’s a combination of music that I’m already excited about and new artists that he’ll bring my way."

So while some artists, such as H.E.R., Cardi B, Frank Ocean, SZA, The Weeknd, Janelle Monáe, Miguel, Tyler, the Creator, Ty Dolla $ign, and, yes, even block party dropout ScHoolboy Q might already be on your radar, chances are you'll hear something new, too. As pointed out by Complex, in the first episode of Season 4 alone, Rae (who launched her own Raedio music label in October) featured rising acts including: Cautious Clay, St. Panther and Yung Baby Tate.

Although Issa still hasn't locked in a replacement headliner for her block party just yet — and her one-time best friend Molly isn't going to tap Andrew's Live Nation connect to help — the bash is sure to include some of Insecure's best musical performances yet.