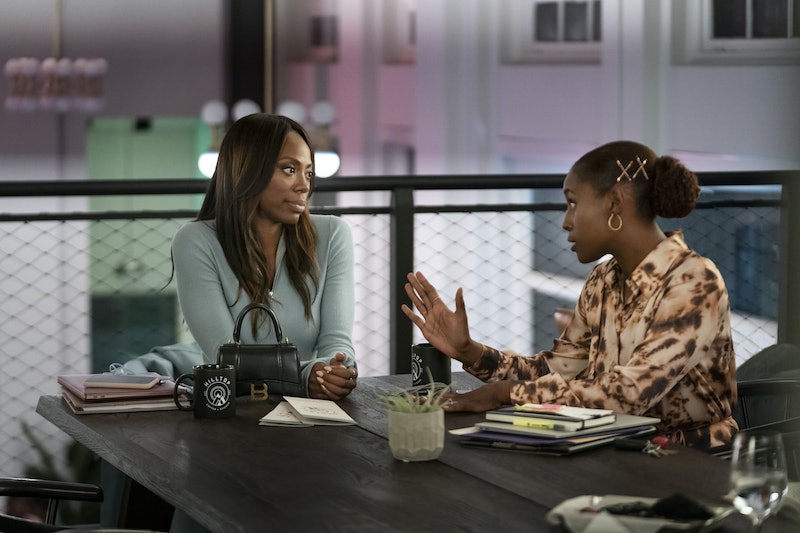 The first words Issa spoke in Season 4 of Insecure left us all shook: "Honestly, I don't f*ck with Molly anymore." Wait, what? While we still don't know what exactly happened to Issa and Molly's relationship on Insecure, the April 19 episode of the HBO series started sowing the seeds of discord between the best friends.

For starters, Molly seems to have some lowkey jealousy about Issa's new friendship with Condola. While handing out Halloween candy at Tiffany's, Molly talked about feeling out of the loop about all the work they were doing on the upcoming block party. At the same time, Issa was equally in the dark about what had been happening between Molly and Andrew (aka "Asian Bae"). To make matters worse, Issa was dismissive of her BFF's relationship concerns, half-jokingly accusing her of looking for issues with Andrew where they don't exist.

Both women blamed their busy schedules, but still said they miss each other and promised to catch up at dinner over the weekend. But when Molly showed up for their catch-up session, Condola was already with Issa. They were finishing up a business meeting, but when Condola mentioned she was hungry and going to get something to eat, Issa invited her to join them. "We're just going to be talking the same old sh*t," Issa said. "Just add your sh*t to our sh*t."

Who could blame Molly for the side eye she could hardly mask? She thought she was going to get some long-awaited one-on-one time with Issa, and we've all been in that place where it's not totally comfortable to open up in front of someone you hardly know. So their conversation was put on pause until their upcoming "Self-Care Sunday" hike.

In the meantime, everything blew up between Molly and Andrew, as she attempted to have a chill night in, yet he still refused to open up or have any sort of meaningful conversation with her. She accused him of wanting to be at a Summer Walker show rather than with her, at which point he'd had enough, saying that "everything is an issue" with her. Adding insult to injury: When Molly tried to call Issa to vent, she couldn't answer because she was at the ScHoolboy Q concert with Condola.

Things really seemed to be going left between Issa and Molly during their hike, though. "It seems like you're always finding a problem," Issa told her, echoing her earlier comments. "Sometimes I'm like, 'Do you want to be happy?' I'm sorry, I'm just... Aren't you tired? Because I'm tired for you."

So now that Issa and Andrew have both pointed to Molly creating her own drama, maybe they're actually on to something. To be fair, in the previous episode, Molly also made a similar comment to Issa, telling her she thinks she enjoys having a life that's so "messy." She excused it as just an attempt to hold Issa accountable and help her "be real" with herself. That taste of her own medicine doesn't seem to be sitting quite as well with Molly, though.

When Andrew called during their Sunday hike to apologize to Molly, she even lied to Issa, saying it was "work sh*t" instead. Once you feel like you can't confide in your best friend, trouble is definitely brewing, and the more you bottle it up, the bigger the inevitable explosion. As Issa told Condola earlier in the episode, she only has room for good energy in her life — and that doesn't seem to be what Molly is giving her right now.