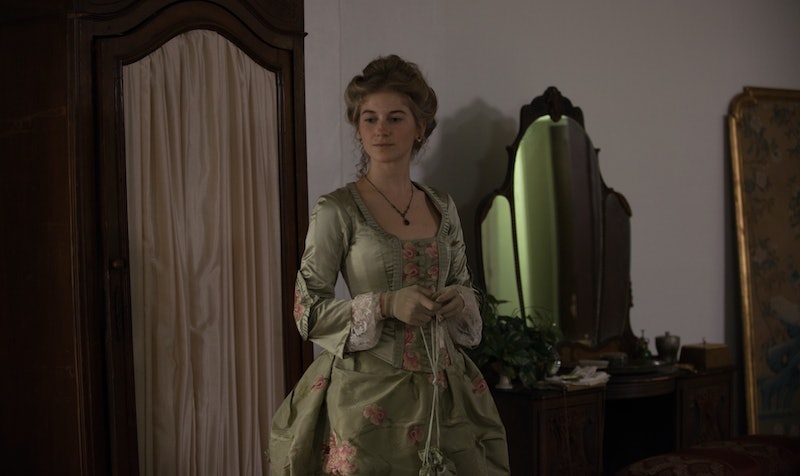 Often, movies can be reflective of their current social climate, and the new film The Institute is a prime example. The movie, out now and on VOD, is both a Victorian Era thriller about a mental institution and a wake up call about standing up against oppressors and finding feminism in an anti-women world. The film tells the terrifying story of Isabel Porter, a young woman who checks herself into an institution following the untimely death of her parents; what starts out as a means to treat her grief-caused anxiety and insomnia, though, soon becomes a bizarre and violent experience. Thanks to a disturbed doctor played by James Franco, who co-directed the film with Pamela Romanowsky, Isabel is subjected to a series of invasive and dangerous experiments that attempt personality modification, brainwashing and mind control. They're sci-fi subjects, for sure, but the movie's themes will certainly resonate with today's viewers.

"It’s sad how relevant the film still is, but funnily enough, what draws Isabel to this doctor is that he says, 'What’s wrong with you is not you, it’s society and society restricting you. If you just strip all of the superficial outfits and fineries away, you’ll get to the root of who you are, and I’m going to help you do that,'" Allie Gallerani, who plays Isabel, explains. "I think [the film] is a real commentary on power and defining, for yourself, who you are and speaking up about whether or not you’re okay with what’s going on around you."

The Institute comes at a time when women's social and reproductive rights are being restricted at a terrifying pace, and the film lends itself to today's pertinent political issues, highlighting the importance of women standing up for themselves and taking action. "Isabel goes through a major transformation. She’s smart enough to want something beyond what her life is offering her, which in the Victorian Era, women were expected to just sit still and be pretty," says Gallerini. "Part of what brings Isabel to the mental institution is everybody telling her that there’s something wrong with her, and that just wasn’t accessible to them, so they thought something must be mentally wrong with her."

The fact that the movie is co-directed by a woman, when there's a depressing lack of female directors in Hollywood, adds to the movie's importance. "I’m so thrilled to be a part of this and I think the story is so important now because I think women are still not recognized," Gallerini says. "It seems like there are low expectations that we have for women and I think that this film, in its own disturbed and twisted way, shows that we have to step up and claim those roles and claim your own story for yourself."

One thing's for sure — having public figures like Gallerani speak up about these issues will definitely get the ball rolling on fixing this frustrating gap.