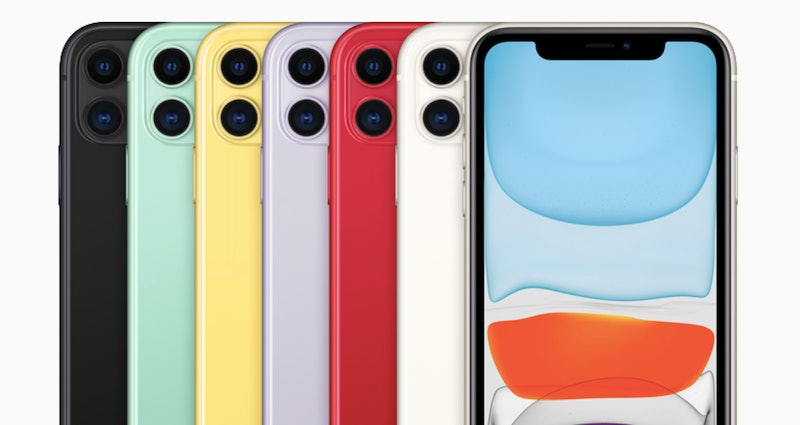 Apple lovers unite: Many long-anticipated Apple announcements were confirmed and unveiled during a live stream of the Apple event, which was hosted by Apple CEO Tim Cook at the Steve Jobs Theater on Sept. 10. Among the many new products and features that Apple unveiled today, the details about the new iPhone 11, including the differences between the iPhone 11 and iPhone X models, were perhaps the most eagerly awaited — and boy, did the conference deliver.

Having a brand new, up-to-date phone is fun, but is it worth it to ditch your iPhone X (or other older model) in favor of the shiny new iPhone 11? Well, I suppose that just depends on A) how functional (or not) your current iPhone model is, and B) whether the major new iPhone 11 features pique your interest or not.

Thankfully, the details shared in the livestream today will make your decision-making a little bit easier. Here are the five biggest differences between the iPhone X and the iPhone 11 that you'll definitely want to be aware of before deciding whether or not to trade in your old model, in terms of colors, pricing, camera work, and all the other major things that were announced. Take note, though, that this is just comparing the iPhone X to the iPhone 11, and not the other two models that were also announced today, the iPhone 11 Pro and iPhone 11 Pro Max, which you can read about here. Onward!

I'm definitely one of those people who care way too much about the color of their iPhone's exterior — exactly why I was such a sucker for both the (now nearly-vintage) iPhone 5C and my current iPhone XR model. Today brings good news for anyone else who's with me: When it comes to the iPhone 11, we're going to have a much larger selection of fun colors to choose from than we did with iPhone X.

iPhone X came in only two simple color choices — silver and space grey. But the new iPhone 11 will reportedly come in six fun colors: Black, white, purple, green, yellow, and red. If you're someone who like to show off their unique taste and personality through their phone color choice, the iPhone 11 is going to give you way more opportunity to do so than the iPhone X did. Who doesn't love options?

2. The iPhone 11 Camera Has Some Major Upgrades

One of the most anticipated feature updates when it comes to any new iPhone unveiling involve anything to do with the camera — and iPhone 11's reported updates do not disappointed.

Firstly, unlike the iPhone X (or any other previous model, for that matter), iPhone 11 will have a dual camera system — meaning that yes, there are literally two camera lenses on the backside. One lens is a 12mp wide camera, which will take gorgeous, high-quality wide-angle photos. But the second is a brand-new unveiling: A new ultra-wide camera that has a 120 degree field of view. This second lens will allow you to frame your shots with much more of the scene around you - without compromising any of the photo's detail or quality. Apple also noted that it's useful for taking photos in small spaces, where you don't have the option of backing away from your subject. The ultra-wide lens allows you to essentially back up virtually, including much more of your surroundings in the shot.

In addition to the dual camera, iPhone 11 will also come with all sorts of smart upgrades — such as the ability to more intelligently identify subjects and relight them accordingly for overall better photos. This means you'll spend less time in your photo editing apps, touching up your pics before blasting them off into your social media accounts. Win-win.

3. There Are Some Fun Video Updates, Too

The camera's perks don't apply to photos alone, of course. There are some really fun new video functions that will come in handy — especially for those of us who live on the 'Gram and Snapchat 24/7. Firstly, according to the live stream, iPhone 11 has the highest-quality video of any smartphone out there, so you're getting the best of the best.

One fun new feature called "QuickTake" allows you to quickly and easily record short videos without switching toggles in your camera app. Simply hold down the photo shutter button (just as you would when recording a video in an Instagram story!) and you can take a short video in the middle of a photo shoot, without having to interrupt your flow and switch over to the separate video screen.

Another fun new feature is the ability to record slow-motion footage on the front facing camera, resulting in what Apple referred to as a "Slofie" (or a slow-motion video selfie). Prepare to up your selfie game in sexy, dramatic, '80s-music-video-style ways that the iPhone X simply can't deliver.

If you're someone who's constantly chasing down chargers, good news — iPhone 11 is swooping in to help us make the most of our phone's battery life by ensuring it's a longer one. According to the Apple event, the iPhone 11's "all day battery life" is longer than previous models — and will be one hour longer than even the iPhone XR's battery life, which at the time, had the longest battery life of any smartphone.

Additionally, it's reported that the iPhone 11 will surpass the iPhone X as far as the strength of both its central processing unit and graphic processing unit, as it possesses the fastest CPU and GPU of any smartphone on the market. This bodes very well for the overall speed of the new iPhone, and is especially helpful for running mobile games (perhaps via the freshly-announced Apple Arcade), if that's your cup o' tea.

5. iPhone 11 Is Cheaper Than Previous Models

The price point of a new iPhone is almost always a major deciding factor when it comes to whether or not you should trade up. And in the case of iPhone 11, this might be on your side. A new iPhone 11 clocks in at $699, which, for a brand-new model's launch, seems pretty reasonable. It's especially reasonable when compared with the iPhone X's launch price, which clocked in at $999, making it the most expensive new iPhone model to date. With that considered, taking the plunge into iPhone 11 land straight away doesn't seem so impossible.

There you have it, folks — just a few of the biggest differences between the iPhone X and the iPhone 11. Just a reminder that this post is only comparing the iPhone 11 with the iPhone X — the other iPhone 11 series models include additional features beyond those described above and are not included in this post, but you can check them out here.