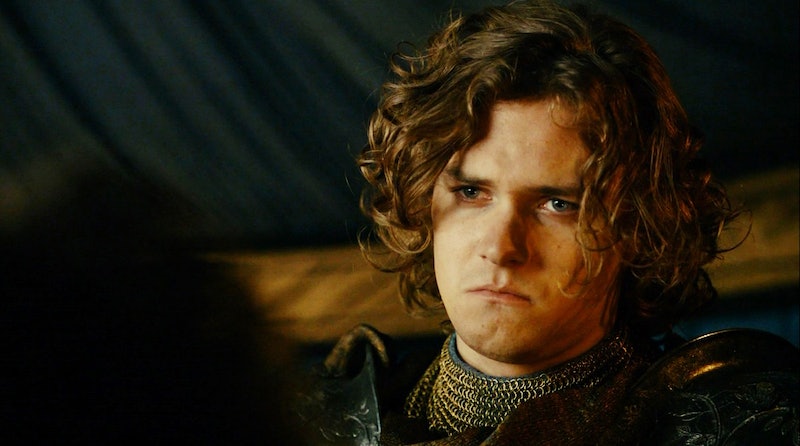 It certainly wasn't easy being Loras Tyrell — just ask the actor who played him, Finn Jones. The Game Of Thrones character, nicknamed the Knight Of Flowers and the brother of Margaery, was known for his good looks and his ability to handle a sword. But Loras spent most of his time on the show locked up for his "sin" (being gay) only to be eviscerated in a cloud of green wildfire by Cersei. On Marvel's Iron Fist, hitting Netflix on March 17, Jones is fighting back, getting his sweet revenge on the bad guys in a way that Loras never got to, and that's very satisfying for Game of Thrones fans.

"Well, I'm Danny Rand," a very bearded Jones tells a receptionist at his father's company Rand Enterprises in a new trailer for Iron Fist. "I've been away a long time." That's the understatement of the decade. When he was 10 years old, Danny was on a plane with his parents that went down. He was the sole survivor. Now he's "back from the dead" 17 years later and really, really good at martial arts thanks to a life spent in the lost city of K’un-Lun.

Danny is back to take down those bad guys who have infiltrated his father's company. "I've been training my whole life for this," he says, and I'm inclined to believe him even if I'm not quite sure at this point what that entails. What it means for Jones, though, is that he gets a chance to show off — something he didn't get to do on Game Of Thrones.

On Game Of Thrones, Loras was a tragic figure who was made to be an example by the High Sparrow by enduring physical and psychological torture. Just when he thought he was going to get a chance to live his life, he was killed. His death, as was his sister's, was used as an example for why you shouldn't mess with Cersei, the latest Lannister to take the Iron Throne.

Now, Jones gets a chance to play a character who gets to make an example of others. It's almost like Loras came back to life to defeat people like Cersei. Danny Rand is a "child touched by fire," with a fist that can literally punch through walls. He's a "living weapon," which is clear from all the guys he manages to fend off in the Iron Fist teaser at New York Comic Con. He's also the final piece to The Defenders puzzle, joining Jessica Jones, Daredevil, and Luke Cage to help save New York.

This time, according to Rolling Stone, the Iron Fist needs to take down baddie Harold Meachum, an executive who's doing some very bad business at Rand Enterprise. He's also very suspicious of Danny's return, but he's not the only one. A voice from the darkness whispers in the trailer: "This city is no place for Danny Rand." Which means that it totally is the place for Danny Rand.

It's clear that Jones is going to get to kick some major butt in the new Netflix series, but, in an interview with Entertainment Weekly, Jones explained that it was Danny's heart that attracted him to the role. "I really enjoy how he’s a superhero with a real heart but has spiritual elements as well," Jones said. He also said there's a contradiction between Danny's upbringing and the way he actually spent his life, which he'll be able to explore: "I’ve always dreamed of a role that bridged spiritual discipline and badass superhero."

If that doesn't avenge the memory of Loras Tyrell, then I don't know what will.