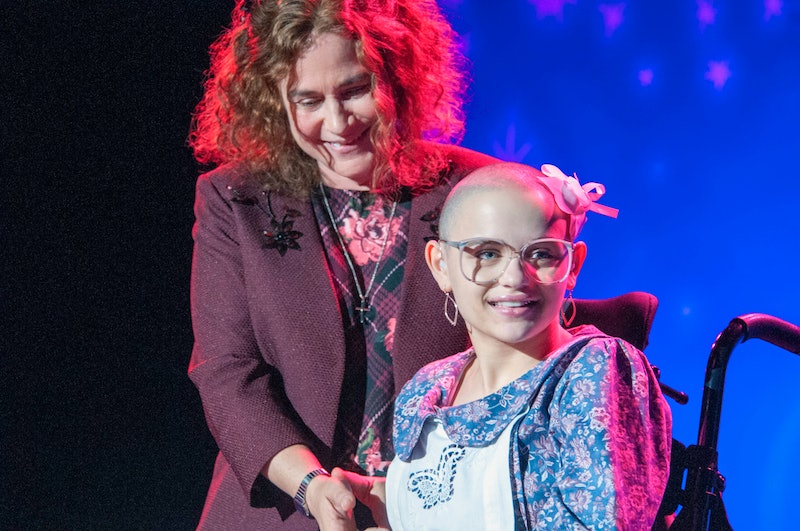 Spoilers ahead for The Act Season 1, Episode 2. There are any number of hard-to-stomach scenes contained within the second episode of Hulu's The Act: a young girl (Joey King) pulling the rotted teeth from her mouth, a detective measuring the open stab wounds of her mother's dead body. But perhaps one of the eeriest is also one of its smallest. After Dee Dee Blanchard (Patricia Arquette) gives a moving speech about the specialness of raising a sick child, her daughter Gypsy joins her in a duet of "their song," The Jackson's 5's "I'll Be There." It's meant to be a touching moment, but something about it, like the rest of the show, feels deeply unsettling — something that, according to creator Michelle Dean, is quite purposeful.

The series dramatizes the true story of Gypsy Rose Blanchard, who was convicted for orchestrating the murder of her mother in 2015, when she was 24. She'd been raised to believe she suffered from a host of ailments and disabilities — including leukemia, seizures, and muscular dystrophy that left her confined her to a wheelchair — when in actuality she was perfectly healthy. Experts later determined her mother, Dee Dee, likely suffered from Munchausen syndrome by proxy, a mental disorder in which a parent or caregiver exaggerates, fabricates, or induces an illnesses in another person for attention. The real-life Gypsy told ABC News she carried out the murder — with the help of her then-boyfriend, Nicholas Godejohn, who was also convicted for the crime — not because she "hated" her mom, but because she wanted to "escape" her.

It's a case that has fascinated the public for years, and The Act's premiere happened to coincide with a documentary focused on another much-discussed story: HBO's Leaving Neverland, which chronicles the alleged sexual abuse two men claim Michael Jackson inflicted upon them as children. Jackson, of course, was also a member of the Jackson 5.

"[The Michael Jackson allegations are] another story where it's multi-dimensional because the abuse in that one spans a lot of different lives. So that's also a thing we're trying to say about this case [of Gypsy and Dee Dee], how wide the net of abuse can be cast," Dean tells Bustle, referring to the way Dee Dee's mental health issues impacted Gypsy.

She adds that The Act team didn't realize that the show would line up so succinctly with Leaving Neverland, but that the choice to include "I'll Be There" was deliberate.

"Subtext is what it obviously is. People have remarked on that [connection to Leaving Neverland] ... We certainly didn't realize the timing, but there is something about that song and the poignancy of it, right?" she continues. "[And] there are a lot of parallels between Munchausen and [the] children of stage mothers, right? Like that [Munchausen] is a [kind of] stage mom-ing?"

But co-showrunner Nick Antosca told The Huffington Post that even without the Jackson connection, the lyrics of "I'll Be There" are eerie within the context of The Act. The song centers around two people who love each other so much, they'll always be there, but that takes on a darker meaning against the story of a mother who has isolated and made her daughter dependent on her.

"Of course, there's a reputation around Michael Jackson and a creepiness to it," Antosca said, "[But] even if you didn’t know who wrote it and who was performing it, the lyrics of that song in the context of this show are ironic and unsettling."

The song certainly isn't the only thing that will make viewers uncomfortable while watching The Act, but it is a detail that paints a disturbing picture of Gypsy and Dee Dee's relationship right off the bat.