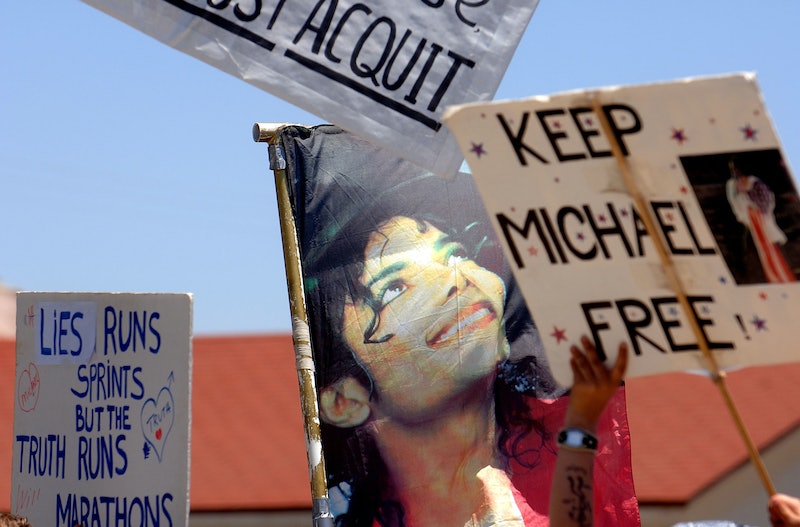 As fans, we attach meaning with a capital “M” to the work of musicians and entertainers. Their songs become woven into the hieroglyphs of our lives, somehow hook themselves onto the belt loops of our memories. And over time, we coalesce as observers around a work of celebrity, filling in the indistinct humanity of an entertainer with our own imaginings. In HBO’s controversial documentary Leaving Neverland, two men — Wade Robson and James Safechuck — confront viewers with graphic accounts of alleged sexual abuse that they claim Michael Jackson inflicted on them as children. As expected, a firestorm has broken out over both the accusations and credibility of the documentary on Twitter and in real life. For us fans, it seems, Jackson’s legacy lives buried in each of us, deep under the soil of our minds like seeds waiting for rain. But a closer look, I think, finds us grappling with the weight of our own memories, our own lives, in relation to the mythic world of Jackson’s celebrity.

Jackson was ubiquitous, so much so that his songs have become touchstones. The perfume of your 1987 prom date rushes alive to your memory when you hear “Thriller.” “Leave Me Alone” may transport you to moments where you fought for your identity. “Scream" awakens you to the battle you wage for your own soul. Though it's different for each of us, memories are shared. My memory of Jackson is not yours and yet it animates us both. And of a beloved figure, memory stands as a living thing. It has agency and purpose and it, too, should be judged. Collectively, we are gatekeepers of Jackson’s legacy and that legacy is on trial. As presented in Leaving Neverland, the evidence against Jackson, in the opinion of some, is damning.

The two-part documentary details how Jackson ingratiated himself inside the families of Robson and Safechuck. He brought Robson, a budding dancer born in Melbourne, Australia, on stage with him to perform after he’d won a contest at age five. Safechuck met Jackson on the set of a Pepsi commercial that featured the megastar. Soon after, they say, calls and faxes flooded the homes of both children. It's claimed that Jackson spoke to both kids for hours and bombarded them with flattering notes, and that he also befriended their parents.

Leaving Neverland gives weight to Jackson’s reported loneliness and isolation, with Safechuck’s mother Stephanie saying that she came to consider him one of her own children. Their accounts also paint a picture of his reported ability to manipulate. To make the children feel as though they were special. That he needed them. Stephanie would cook for Jackson and wash his clothes. According to accounts in the documentary, Jackson reportedly would say the children were his friends, that he needed friends, that he’d asked God for friends and the divine sent him Robson and Safechuck. He also reportedly promised to help them and encouraged their creativity, and it's clear that the kids and their parents believed that what Jackson could offer had the potential to make them, in an entertainment industry notorious for its ruthlessness.

It was a story filled with manic adventures peppered with first-class tickets and limousine rides. A story of ambition for your children, for dreams.

These psychological techniques are firmly within the narrative of past abuse allegations against Jackson, and, if true, are consistent with techniques experts and advocates say are used by abusers to groom children before they take action.

There are moments in the film that punch you straight in the gut. In the documentary, both Robson and Safechuck speak in detail of allegedly increasingly intense sexual encounters with Jackson. Robson’s mother Joy remembers losing her son at Jackson's home, Neverland Ranch. How, you ask, can a person permit themselves to lose their child at a stranger's sprawling complex? Then you remember that stranger is Jackson — that both Stephanie and Joy say that they thought they knew him. But it wasn’t just their own interaction they were processing, but that of his celebrity. It was a collective knowing, as Jackson was a superstar, with a well-known public persona of which they were also aware. It was a story filled with manic adventures peppered with first-class tickets and limousine rides. A story of ambition for your children, for dreams. Jackson, as the documentary tells it, opened the door to his life — the same one he seemed to be running like hell from — only to allegedly reveal to these boys that there was a cost to all this.

Memory is a fragile thing. Detractors of the documentary and the allegations have investigated. They’ve poured over court documents, mail, and stories of the children. The narrative that they present is always that Jackson was being extorted by his accusers. They wonder vehemently why both Robson and Safechuck have changed their stories over the years, though the documentary has them examine why they didn't reveal the alleged abuse until they were adults. (Jackson was never charged with any crimes related to the men in the documentary.) Detractors reiterate that Jackson was acquitted of all counts of molestation during his 2005 trial. They build a case that people were jealous of Jackson, that he was beset on all sides by the worst of humanity while he longed for innocence, for awe, and for the company of children.

But nothing explains the rings Jackson reportedly bought Safechuck, nor the one that was allegedly given to him in a faux wedding ceremony. Nothing explains the alleged suffering that both men describe in the film. As a society, we talk about believing survivors, then, when presented with firsthand claims of alleged sexual abuse, we find it difficult not to look away.

Should I push on as a fan, despite the possibility that he may have caused several children tremendous pain? How many lives are my memories worth, I must reckon, and what do I do with this art that lives inside me?

Michael Jackson's estate and family have been defending the late entertainer in the face of this revived conversation. Per The Hollywood Reporter, the estate sued HBO and Time Warner to block them from airing the documentary. An official statement called it "another rehash of dated and discredited allegations." And individual relatives have spoken out in the press and on social media.

Jackson’s nephew, Taj, has been going to bat for his uncle on Twitter, his posts focusing on truths, lies, and memory.

I can understand his frustration, and his desire to arm himself and take up the flag for his uncle. Jackson lives in his memories, as well.

As a Jackson fan, I can’t sit here and re-adjudicate his trial. I can’t undo the memories that Jackson’s work has bolstered for me. I can’t let go of school dances and jamming with friends, nor can I deny that I felt his voice and dance moves in my bones. I can’t deny that there was a sense of pride and admiration there for Jackson because of where he came from and where he went. In some ways he was a metaphor for an innocence and purity that some felt America was walking away from.

But I also cannot deny that my own memories are now in flux. I must decide whether to allow my memories to face who Jackson allegedly may have been beyond the songs and how they mingled with the song of my life. Should I push on as a fan, despite the possibility that he may have caused several children tremendous pain? How many lives are my memories worth, I must reckon, and what do I do with this art that lives inside me?

In action, it means I must put Michael Jackson down. For me, the allegations are too many and serious, the documentary too thick with the burden of their alleged memories. I must wrestle with my own life to make sense of Robson’s and Safechuck’s. What we leave behind in the fight for Michael Jackson is ourselves. Our parents. Our lives. As the dream of MJ fractures and cuts us to our cores.