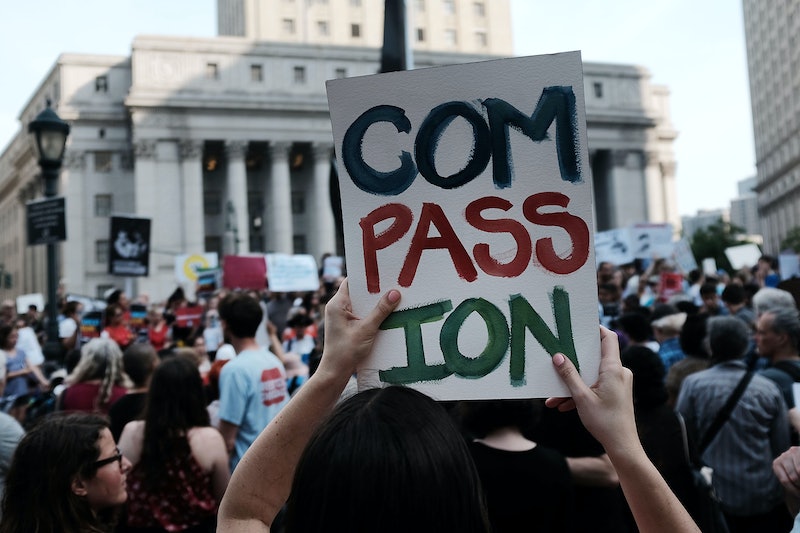 In this op-ed, Tali Ginsburg, a queer Jewish writer and organizer who was arrested during a Jews Against ICE protest, explains how mourning is a potent tool for organizing for immigrant justice.

This Sunday, on Tisha B'Av, the Jewish holiday of mourning, approximately 40 Jews were arrested inside a NYC Amazon store while protesting the company's contracts with Immigration and Customs Enforcement (ICE). As I watched the livestream from a vigil at a detention center in Illinois, I thought back to my own arrest on July 16, when the sound of the Mourner’s Kaddish echoed inside ICE headquarters in Washington D.C.

For a moment, right before I was arrested, everything — from the police surrounding us to the thousands of protesters gathered outside — seemed to fall silent as our mourning prayer transformed into public protest. Standing arm in arm with 10 other Jews and allies, I recited the names of the six children who have died in United States custody over the past six months: Carlos Hernandez Vasquez, 16; Wilmer Josué Ramírez Vásquez, 2; Juan de León Gutiérrez, 16; Jakelin Caal Maquin, 7; Felipe Alonzo-Gomez, 8; and Mariee Juárez, 1.

Six children. Six months. Six million: an echo of those lost in the Holocaust, for whom Jews often say “never again.”

In Judaism, mourners traditionally recite Kaddish three times a day for a year after the death of a loved one, repeating it over and over until there is no room to forget. As we observed the yearly ritual of mourning for Tisha B’av on Sunday, I was struck by this need for repetition. Jewish ritual asks that we remember again and again without ever dulling any of the pain. Our collective ability to reckon with the violence of this moment is contingent on this practice, which builds our capacity to mourn and fuels our call to abolish ICE.

Stories of the atrocities perpetrated in detention camps and against immigrant communities, not least the recent mass shooting in El Paso, have become commonplace. So commonplace that it would be easy to become desensitized by this repetition. But as a Jew, I am all too familiar with where this kind of desensitization can lead. When I see camps that are overcrowded, unhygienic, and cruel, I know in my bones that when we say “never again,” it means that we have to act now.

That’s why I joined the Never Again Action and Movimiento Cosecha in reciting the Mourner’s Kaddish in the lobby of the federal ICE building last month. While we were being arrested inside, hundreds of other protesters blocked entrances and encountered police outside. Together, immigrants, Jews, and other allies made it impossible for ICE employees to do their jobs and forced them to face the communities their agency raids and the families it separates. We made them hear the names of the children whose deaths were made possible by their daily actions. We made it impossible for them to forget.

The only way to build a new world is by refusing to look away from the pain of the present one.

As I said the Mourner’s Kaddish, I thought about how Jews are able to recognize mass atrocities not by the number of deaths, but by the gradual dehumanization that allows those deaths to go unmourned. Right now, those held in detention are denied any degree of choice, support, or basic human rights. These injustices echo inside the United States’ history of white supremacy and xenophobia — from the colonization that stole the land on which detention centers have been built to the Japanese internment camps that are being repurposed as detention centers once again.

Jewish tradition offers a model of how to hold the immensity of this historical trauma. We create space for feelings of hopelessness and fear without once forgetting to move toward action. On Tisha B’av, we recite a liturgy that recounts in detail the desolation we feel after our community is attacked, as has happened on this date many times over the past 2,500 years. We build a container to hold the immensity of grief and loss, displacement and death.

But our rituals of mourning do not end there. We mourn not just to remember but also to connect and create. The Mourner’s Kaddish makes no mention of death. Instead, it blesses peace and wholeness and carves space for hope. When turned into action, rituals of mourning imagine and work toward a world that doesn’t repeat the same tragedies. Whatever our background, making our mourning public can move us to show up boldly in coalitions for immigrant justice.

The only way to build a new world is by refusing to look away from the pain of the present one. We all need to learn how to mourn more deeply, more critically, and more compassionately. We need to mourn the ways we have been cut off from our own humanity and desensitized to the deaths of children and the separation of families. We need to mourn in public, so that we can truly say, “Never again, para nadie.”

Mourning in public means taking direct action to shut down ICE. It also means donating to groups like No More Deaths that are actively providing aid to stop the deaths of migrants in the desert, to legal services such as RAICES, or to Freedom for Immigrants’ National Immigration Detention Bond Fund, which helps get people out of cages. It means remembering, and using that memory to fuel the ways we show up again and again for those who are demanding justice.

In memory of the six children killed in U.S. custody over the past six months: Carlos, Wilmer, Juan, Jakelin, Felipe, and Mariee. May their memory be a blessing: zekher tzadik livrakhah.