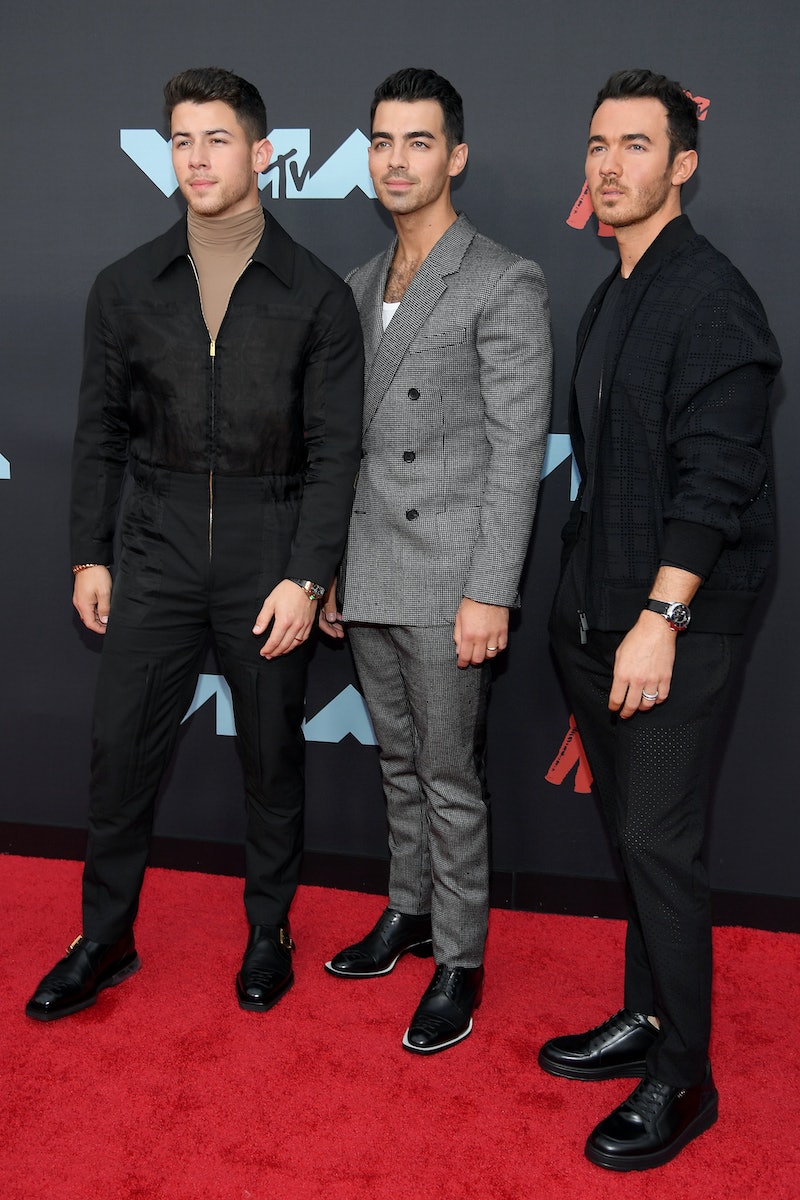 After a six year long hiatus, the Jonas Brothers are back with a new album called Happiness Begins. With a new record that dropped on June 7 and a nationwide tour, the pop group is having a buzz worthy 2019. That hype extends to their red carpet looks, and the Jonas Brothers' 2019 MTV VMA outfits did not disappoint. The brothers decided against coordinating this time around, and each member wore a distinctly different outfit from Fendi's Men’s Fall Winter 2019 Collection.

Nick Jonas decided to go with a turtleneck and brown sheer jumpsuit. The jumpsuit's abdomen is completely sheer, but Nick covered it up with his turtleneck. Joe Jonas went in a more formal direction and donned a double breasted diagonal dot wool suit with a simple white T-shirt underneath. Kevin Jonas went with an all-black outfit, wearing a black perforated bomber jacket suit with a black tee underneath.

The Jonas Brothers are nominated for four awards at the 2019 VMAs, including Artist of the Year, Song of the Year for "Sucker", and Video of the Year for "Sucker." While the pop band might not have been releasing new music for the past half-decade, all three brothers were busy getting married and starting families. Most recently, Nick Jonas married Priyanka Chopra in 2018, and Joe Jonas wed Sophie Turner in 2019.

The Jonas Brothers' Happiness Begins tour started on Aug. 7, and the artists' families joined along for a couple of the stops. Priyanka, Turner, and Danielle Jonas were spotted in the tour bus from Miami to California, and they even co-starred in the "Sucker" music video that is nominated. They did not join the Jonas Brothers on the red carpet for the VMAs though.

The Jonas Brothers' VMA outfits differed from their other red carpet looks in that they didn't coordinate this time. In May 2019, the artists came to the 2019 Billboard Music Awards wearing modern reiterations of suits. The group wore patterned ensembles that differed in color but gave them a cohesive appearance.

The Jonas Brothers' wives accompanied them to the event, and the women brought their best rock star looks. Turner wore a Louis Vuitton jumpsuit that had a futuristic flair to it. The space suit was a chrome silver, but was accented with a colorful flower design.

Chopra went with a more classic ensemble, choosing a white sequined dress by Zuhair Murad and over $250,000 worth of jewelry.

Jonas also went for sequined glamour, and wore a strapless dress with a thigh-high slit.

No matter what red carpet they appear on, the Jonas Brothers always make a splash.