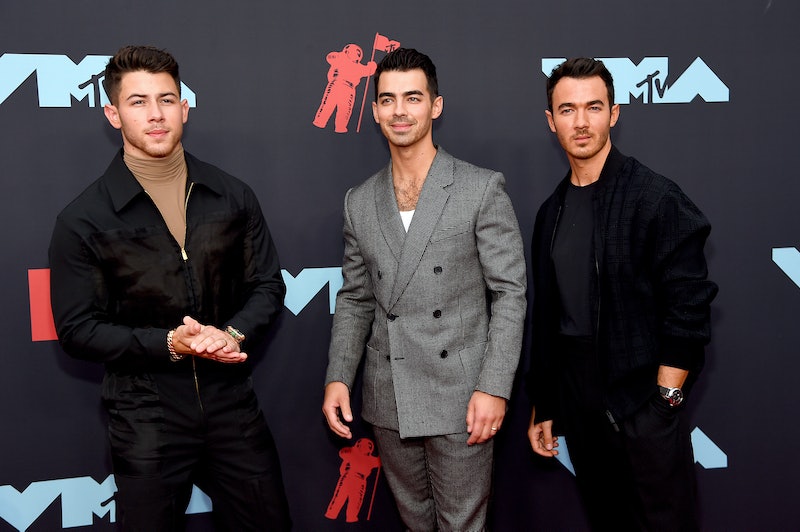 It had been over 10 years since the JoBros had last performed on the MTV Video Music Awards when the reunited band took the stage — actually, their own — on Monday night. Taking a night off from their current tour, the Jonas Brothers performed a medley on the VMAs — not at the Prudential Center, which is where the ceremony took place — but at the famous Stone Pony in Asbury Park in their home state of New Jersey. They performed their hit tracks "Sucker" and "Only Human," moving from inside the bar to the Jersey Shore boardwalk, surrounded by fans.

The band added several VMA nominations to their celebrated comeback, getting a nod for Artist of the Year, plus nominations for Video of the Year, Song of the Year, and Best Pop Video, all for "Sucker," the first single from their 2019 album Happiness Begins. While the brothers were certainly pleased about the honors, no one was as excited as Kevin's daughters, Alena and Valentina, who shared their feels via a video on their mom Danielle Jonas' Instagram.

The last time the Jonas Brothers were VMA performers was back in 2008, when they favored viewers with their single "Lovebug." Since the band's breakup in 2013, both Nick and Joe showed up at the awards show a few times — Nick as a solo artist and Joe with his band DNCE, winners of the 2016 Best New Artist VMA. But it was so special for fans to see the guys back together as a unit, especially on their home turf.

The band hit the ground running the minute they announced their comeback, releasing "Sucker," doing a radio press tour, and embarking on a week-long residency at The Late Late Show with James Corden. Their second single "Cool" and its beach-centric, Elton John-inspired video soon followed. Then there was the Amazon documentary about their rise, fall, and reunion, Chasing Happiness, their first full studio album in 10 years, Happiness Begins, and a third single, Only Human. Somewhere in there, they announced a massive tour, which they're in the middle of right now. Fortunately, the Jonas Brothers carved out some time for the VMAs as well — not just to attend the awards themselves, but to give their fans who can't make it to the tour a show.

It was the setting of that performance that made it extra special to fans who've been following the band since their earliest days. Their New Jersey background has always been a big part of who they are as a group, so it was only fitting that they hit a venue that's also synonymous with the state. The Stone Pony has been around since the '70s and has hosted the king of Jersey rock — the Boss, Bruce Springsteen — countless times. You can't do much better than that for ambiance.

Whether or not the brothers go home with any awards tonight, their VMAs performance was another reminder that they're back and better than ever.

More like this
Brad Pitt Wants To Share The Spotlight With This Celeb In Shania Twain’s “That Don't Impress Me Much”
By Alyssa Lapid
Harry Styles Is Performing At The 2023 Grammy Awards
By Jake Viswanath
Adam Levine & Behati Prinsloo Welcome Their Third Child Together
By Jake Viswanath
Linda Ronstadt’s “Long Long Time” Plays A Pivotal Role In The Last Of Us
By Brad Witter
Get Even More From Bustle — Sign Up For The Newsletter
From hair trends to relationship advice, our daily newsletter has everything you need to sound like a person who’s on TikTok, even if you aren’t.