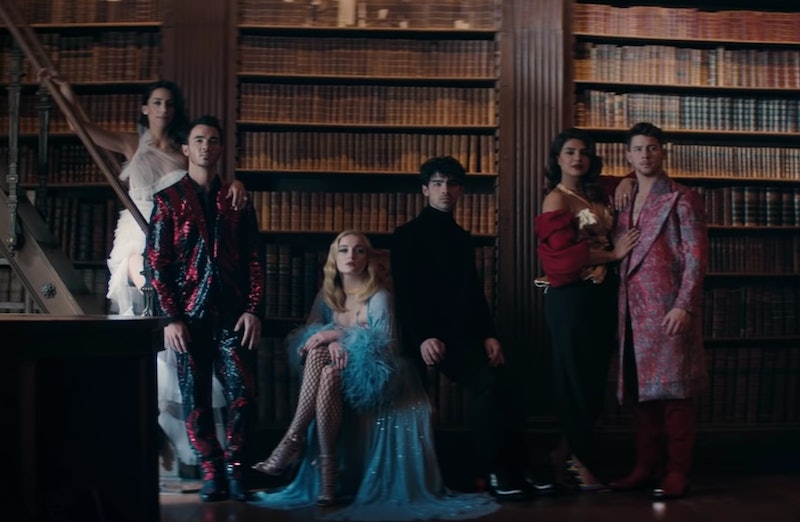 It's official: The Jonas Brothers have reunited. After six years of being on hiatus, the band's making music again. And with the release of a new single and music video, fans surely want to know every little tidbit they can about this new era of the JoBros. Well, lucky for you, the Jonas Brothers behind the scenes "Sucker" videos show a little bit of what went on during filming

On Feb. 28, the Jonas Brothers shared the news that they were releasing their first song in years, called "Sucker." They soon revealed that the music video would come out at the same time, sparking a massive freak out from fans all over the world. This news arrived just a couple of weeks after rumors of the reunion began circulating, with The Sun and Us Weekly reporting that a return, tour, and documentary were all on the horizon.

The video debut was met with major enthusiasm from fans, and for good reason. It featured the brothers — Nick, Joe, and Kevin — and all three of their significant others: Priyanka Chopra, Sophie Turner, and Danielle Jonas. Chopra and Danielle are married to Nick and Kevin, respectively, while Turner is engaged to Joe. The whole vibe of the video was basically a regal, mad tea party, and now, thanks to the guys (and Turner), fans are getting a look at the behind the scenes fun. (That includes Nick's super sweet video of Chopra playing pinball on set.)

His caption read, "another behind the scenes video from the sucker video. Thank you to my best friend. Love of my life for being in this video. Starting this new chapter with you by my side means the world. I love you @priyankachopra #sucker @jonasbrothers." He posted another video in a vlog-type style detailing, quickly, the shooting of the video, from Kevin arriving late to being on set with Nick and Chopra being so stinkin' cute. There's another one from him that also showed the three women filming a scene where they're screaming out of their minds for the boys.

Chopra shared some really great pictures from set, too featuring her in a few different, fabulous outfits. Joe also posted a hilarious video of the tea party scene which included all six of them. In a posh and snooty accent, Joe narrates as he pans over the table, where his family's so in character, you won't be able to stop yourself from smiling.

Turner gave a hard stare at Joe's camera, but totally in a posh way, of course. Her wild attire just works so well, and she pulls it off along with Danielle and Chopra. She posted a hilarious video as well. With a dainty hand in the air, she goes to sip on some of her tea in elegant china. The caption reads, "The @jonasbrothers are back in town....." which goes so well with her saying, "And that's the tea," at the end of the video.

It's a gag she does on her Instagram where she says funny opinions in her stories and responds with "And that's the tea." She looks like she's trying to keep a straight face, and honestly it's impressive she did it for so long.

It truly is a great time to be a Jonas Brothers fan, with your childhood faves coming back to produce new music for you and treating you with an epic new video. "Sucker" proves that they haven't lost their touch — although no one really thought they ever did — and it's safe to say that their BTS antics have only gotten better with age (and the addition of Chopra, Turner, and Danielle).

More like this
The Spice Girls Just Dropped A Brand New Music Video
By Sam Ramsden
Craig David Is Still Slicker Than Your Average
By Olivia-Anne Cleary
20 Years Later, Kelly Clarkson & 'American Idol' Judges Reunite For Her Hollywood Walk Of Fame Star
By Radhika Menon
Kate Bush Revealed The Real Meaning Behind 'Running Up That Hill' Lyrics
By Darshita Goyal
Get Even More From Bustle — Sign Up For The Newsletter