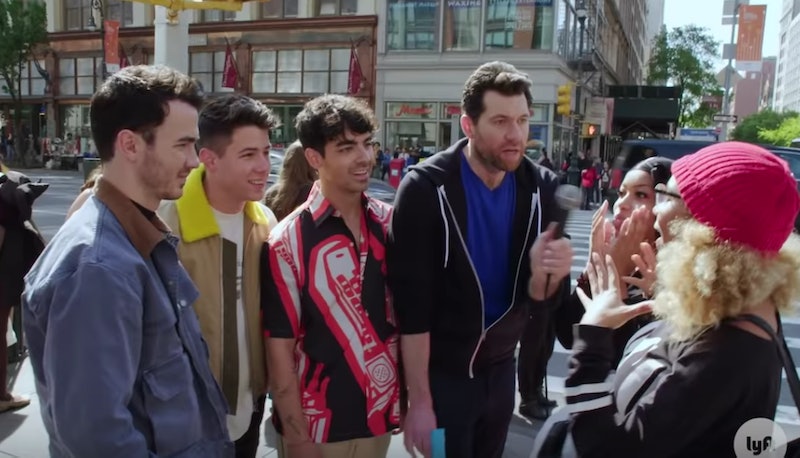 The Jonas Brothers are back — and Billy Eichner is alerting lots of unassuming New Yorkers, in case they didn't hear the news. In a new video unveiled on Tuesday, May 21, Eichner welcomed the Jonas Brothers in a new Billy on the Street segment, and the JoBros episode showed love for Kevin in the most hilarious way. At around the two-minute mark of the segment, Eichner and the brothers approach two enthusiastic fans at a crosswalk. When Eichner presses the fans about their favorite Jonas brother, the women unanimously reply “Nick,” which causes Joe and Kevin to hilariously disperse in separate ways. When one fan follows up with an “I’ve got love for you, too, Joe!”, Eichner screams out “Kevin! WHAT ABOUT KEVIN?” For longtime fans of the boy band trio, this lack of appreciation for Kevin is still very much a deep cut.

Throughout the segment, Eichner and the Jonas Brothers approach an eclectic mix of locals to announce the boy band’s musical resurgence. And because it wouldn’t be a proper Billy on the Street segment otherwise, the comedian’s thunderous marketing strategy was met with mixed reactions. At the beginning of the episode, a sweet woman in a magenta cardigan — who first questioned if the trio were just look alikes of the real Jonas Brothers — posited about the title of the band’s hit record “Sucker.” She quipped, “‘Sucker,’ really? I wish it had another name.”

As the segment progresses, viewers are offered varied responses from pedestrians: A young woman who recalled attending a Jonas Brothers concert in the seventh grade with her mom, another woman who asked Nick about his extravagant nuptials to Priyanka Chopra, a young man who gave the brothers high fives (to which Eichner responded “Oh, I feel straight”), and an older gentleman who walked by and quipped an unamused “Who cares?” Oh, New York. Your ambivalence is a thing of beauty.

Billy on the Street follows the comedian as he traverses the streets of New York to interview pedestrians about topics pertaining to pop culture. Eichner is often accompanied by celebrity guests as he loudly screams at unassuming interviewees in this unorthodox street-style series. The Jonas Brothers’ Billy on the Street appearance comes on the heels of the boy band’s official reunion back in February. Following the release of their first single in over six years, “Sucker,” the trio announced the release of their upcoming album Happiness Begins, slated to be released on June 7. The new album marks the band’s first album in a decade, preceded by their 2009 studio release Lines, Vines and Trying Times. This August, the brothers will hit the road once more for their Happiness Begins Tour.

Following their Billy on the Street segment, the JoBros are expected to grace television screens once more on the premiere of Nickelodeon’s All That reboot on June 15. The Jonas Brothers confirmed their appearance in a May 14 Twitter post alongside All That alum Kel Mitchell.

The Jonas Brothers are officially back, baby!