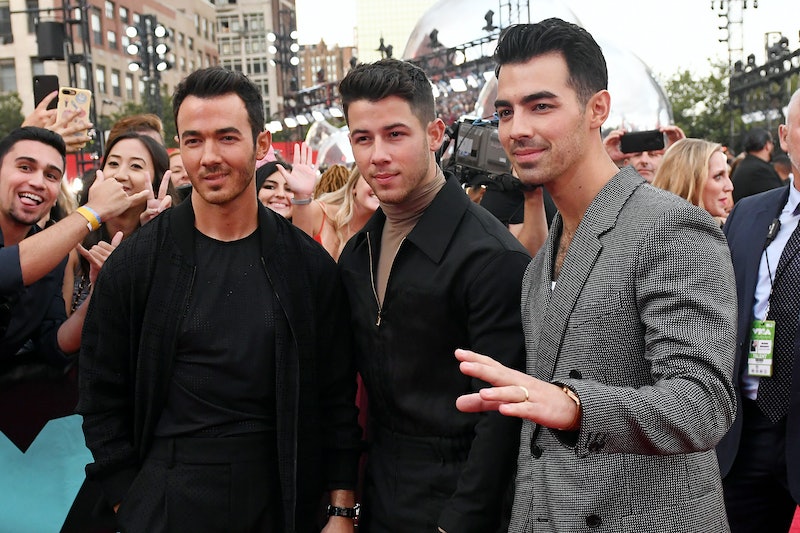 With the immense fame that the Jonas Brothers have amassed, it was only a matter of time before someone got into their Instagram account and started posting some wild stuff. This week, Diplo took over the Jonas Brother's official Instagram, sharing embarrassing memes about the band and shameless self promotion. But while the Jonas Brothers' Instagram has been hacked, it's actually for a pretty good reason.

It all started on Sept. 25, when something strange popped up on the Jonas Brothers' account: a picture of Diplo, wearing only Calvin Klein underwear. The caption underneath read, "@calvinklein ur welcome for the free promo. follow @diplo." After that, five more posts were shared, all with the signature "follow @diplo," seemingly confirming that Diplo was behind the hack. Joe Jonas even shared a screenshot on his Instagram Story, supposedly showing a text he had sent the DJ that read, "Dude. Honestly it was funny for like a minute but who gave you the password?" According to Joe, Diplo did not respond.

While it wasn't clear at first why Diplo "hacked" the band's profile, the fact that it wasn't taken down immediately suggested that it was all part of a master plan. So it wasn't a surprise when, on Thursday afternoon, the account shared a short, one-minute video slideshow featuring photos making fun of the Jonas Brothers' hair that ended with the words, "Friday, 12 am," hinting at a new release. A few hours later, the account posted what looks like a teaser for a new music video, with the caption "lonely. 12am et."

According to E! News, "Lonely" is a new single from Diplo's upcoming country album. In fact, according tot he music video YouTube page, the artist isn't even going by Diplo, he's Thomas Wesley. So, fans should expect some souther twang, bangos, and heavy guitar, mixed in with Diplo's usual EDM flare — and, of course, the Jonas Brothers. And, while the collab might surprise some fans, the truth is that the DJ has a pretty long history with the band. He even live streamed Joe Jonas' and Sophie Turner's Las Vegas wedding on May 1.

According to E! News, Joe later admitted that their Vegas wedding was supposed to be completely private, and Diplo wasn't supposed to be livestreaming. Lucky for the DJ, however, Joe wasn't too upset about it. "We just laughed. We loved it. We thought it was ridiculous," Joe said during an interview on Capital Breakfast with Roman Kemp in May. In a separate interview, Turner also said that if not for that live video, she would have kept her wedding a secret. "It would have been better if no one had known, but I actually think it was funny, Turner said told PorterEdit.

If he was hoping to get back into Joe's good graces, hacking the Jonas Brothers Instagram page probably wasn't the way to do it. But, as long as fans get a new JoBros collab in the end, it will all be worth it.

More like this
Everything You Need To Know About ‘Black Panther: Wakanda Forever’
By Bustle Editors and Radhika Menon
Gabby & Rachel Reveal How That 'Bachelorette' Rose Ceremony Twist Happened
By Grace Wehniainen
Everything To Know About 'RHOC' Season 17
By Brad Witter and Sophia Moore
'RHOSLC' Season 3 Will Likely Show The Cast’s Reactions To Jen Shah’s Guilty Plea
By Brad Witter
Get Even More From Bustle — Sign Up For The Newsletter