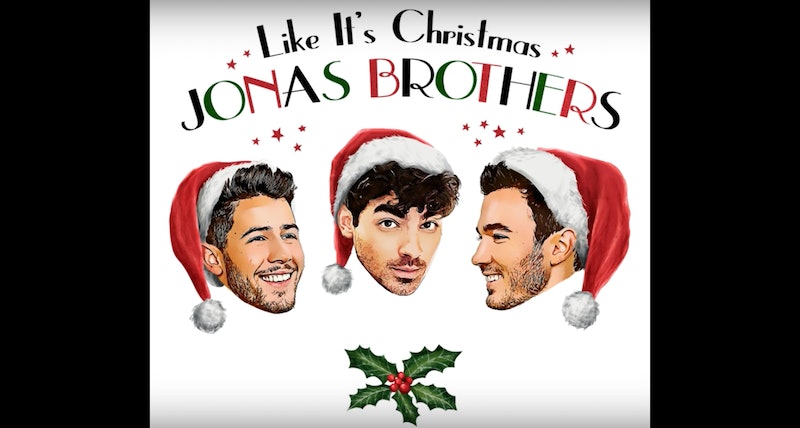 Like Mariah Carey, your favorite boy band is ready for Christmas in November. On Nov. 8, the Jonas Brothers released their first Christmas song in 11 years. The new single, “Like It’s Christmas," follows their 2008 song “Joyful Kings,” a rendition of “Joy to the World” featured in Hollywood Records’ Christmas compilation album All Wrapped Up, per Billboard. And just days prior to the latest release, the brothers debuted the "Like It's Christmas" cover art, which will definitely put you in the holiday spirit.

On Instagram on Nov. 5, the Jonas Brothers shared an illustrated image of Nick, Joe, and Kevin donned in festive Santa hats to announce the new single. In the caption, the band even referenced Carey, who fans have long hailed as the reigning queen of the holiday. The band wrote, “Mariah Carey has given the world the green light, so the holiday season has begun!!! Our brand new original Christmas song #LikeItsChristmas is out on Friday people.” In the festive new track, the brothers croon,

The new track comes on the heels of a whirlwind year for the newly reunited trio. In February, the brothers announced that their then-defunct band Jonas Brothers would reunite six years after their 2013 split. The trio debuted their first single, “Sucker,” in March to fevered fan frenzy. They’ve since released their album Happiness Begins, embarked on a summer North American tour (which has been extended for a second leg into December), and released their Amazon documentary Chasing Happiness.

In an interview with NPR in August, guitarist Kevin reflected on why the band’s initial split needed to happen in order for the band to come together today. “It hurt in the moment. But long-term, it was what everyone needed,” he said. “Nick needed to go do his solo project. Joe needed to create DNCE. I needed to spend time at home and be with my family and my children be a father... and because of it, I think we're stronger today than we were even then."

More like this
The Jonas Brothers' New Album Has A Very Meta Name
By Alyssa Lapid
The 12 Most Controversial & Unexpected Grammy Moments Ever
By Jake Viswanath
Jay-Z Is Performing At The Grammys, Meaning Beyoncé Might Actually Show Up
By Jake Viswanath
Adele Is Attending The 2023 Grammys, Thank You Very Much
By Jake Viswanath
Get Even More From Bustle — Sign Up For The Newsletter
From hair trends to relationship advice, our daily newsletter has everything you need to sound like a person who’s on TikTok, even if you aren’t.