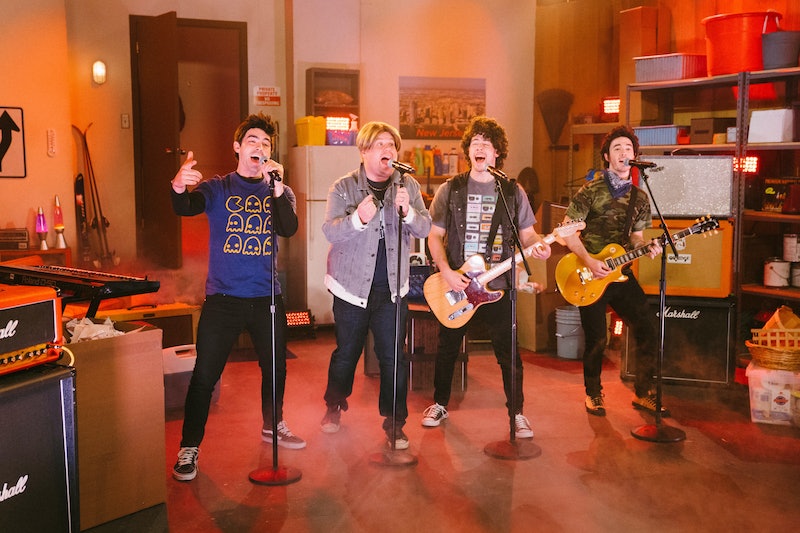 The Jonas Brothers are killing the comeback game. After making headlines with their “Sucker” music video, which featured the brother's significant others Danielle Jonas, Sophie Turner, and Priyanka Chopra Jonas, the band stole our hearts with a Friends tribute we never knew we needed. Now, Kevin, Joe, and Nick Jonas are apparently set on conquering the parody world as well. During night two of their week-long takeover on The Late Late Show With James Corden, the Jonas Brothers parodied “Year 3000” with James Corden, transforming their first big hit into “Year 2019,” a cleverly modernized update that’s almost too real to handle.

The late-night show built a dingy, messy basement set that’s completely opposite to the pristine garage in the original “Year 3000” video, perhaps a move meant to reflect the mess that is the year 2019. In the sketch, Kevin yells for Joe to come downstairs to start rehearsing, and Joe, dressed in none other than a Pac-Man tee, explains that he was busy updating his Top 8 on MySpace. After Kevin tells Joe to make sure that it includes Nick, the younger brother pops out from under a blanket, with the iconic full head of curls from his teenager days making its grand return. The boys then pull out their best terrible Borat accents before actually picking up their instruments — to really sell the mid-2000s vibe. (If their Disney Channel sitcom JONAS didn’t teach you already, never doubt the Jonas Brothers’ dedication to cheap yet great comedy.)

Instead of their next-door neighbor being the guy that invents the time machine, Corden himself takes the role of the time traveler from the future in “Year 2019”, obviously. “Stood there, said his name was James Corden, but we hadn’t heard of him,” Nick crooned, slyly adding in expert shade, as the late night host made his entrance in a blonde bowl-cut wig (how 2006). From there, the boys took on everything that makes 2019 the bizarre year that it has started as, beginning with none other than the current POTUS.

“I’ve been to the year 2019, you won’t believe who the new President is,” the band and Corden sing. “It’s the guy who hosts the Apprentice, it’s pretty weird, super weird.” Truer words have never been spoken.

After addressing the obvious, they replace the futuristic concepts they sing about in “Year 3000” with things that are happening in real-time, including the popularity of different types of milk, the Snapchat dog filter, and the multiple adaptations of Spider-Man that seem to haunt us at least once a year. They also managed to throw major shade at Twitter, Fyre Festival, and Kanye West in one swoop. “We thought the future would be the best, so what’s new with Kanye West?,” the brothers asked, with Corden delivering an accurate “Uhhh…” in response.

Despite the poignant references, the best part of the parody is when the band finds out new information about their future selves. “You’ll be married,” Corden sang to Nick. “That’s surprising,” he responded with his best confused face. And of course, the band concluded the parody in a more uplifting way with encouragement, and a nod to their new growth. “Some things have changed, but it still can get better,” they crooned. “And our band is back together, and doing fine.” If the JoBros keep serving high-quality parodies like this, we will be doing fine as well.