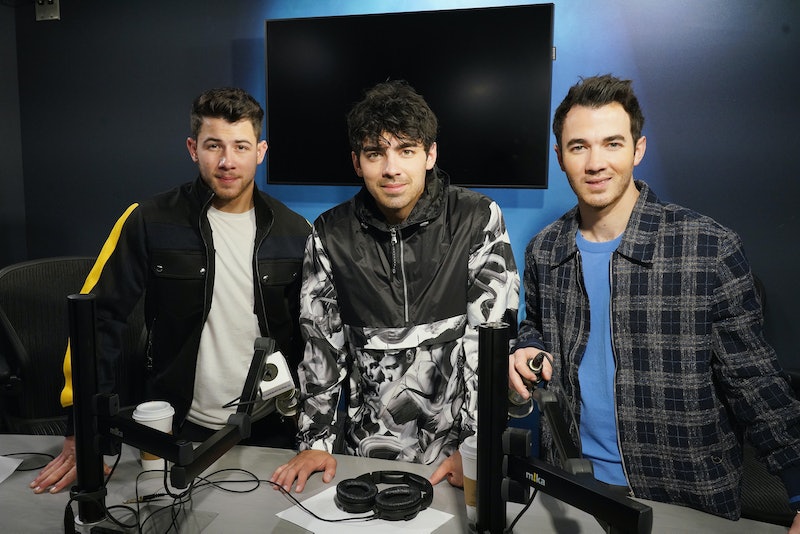 If you're looking to have an unforgettable night out, call on the Jonas Brothers — and the "J-Sisters" — to make sure the party is as cool as possible. The Jonas Brothers and their significant others hit up a college bar for a truly epic performance, giving college kids everywhere the concert they've dreamed of since the very first time they heard "Burnin' Up."

The brothers performed at Penn State's Champs college bar on Friday, April 5, where they treated fans to both their new singles and some early aughts classics, like "Year 3000." The band chronicled the concert on social media, where Joe declared Champs to be the "best bar ever" alongside photos of himself and his brothers onstage. That sentiment was shared by his fiancée Sophie Turner, who posted a video of the crowd chanting "Lady Stark" in her honor, along with the caption, "We are.... @champspennstate is my favorite college bar in America."

In addition to being excited by seeing the Lady of Winterfell onstage at the Jonas Brothers concert, the crowd at Champs also went wild when Joe declared that it would be an "open bar" during the show, officially filling everyone who wasn't in attendance with the deepest form of FOMO. "Jonas Brothers bought my drinks tonight," one Twitter user wrote, cementing the fact that the JoBros know how to party now that they're all grown up.

And now that they're all grown up, the newly-reformed Jonas Brothers are bringing their wives on the road with them. Ahead of the show, Priyanka Chopra shared a photo of herself, Turner, and Danielle Jonas, goofing around on a private jet as they arrived in Pennsylvania with the band.

"The #Jsisters are finally together!! @daniellejonas @sophiet ❤️😍🎉🙌🏽" Chopra wrote alongside the picture, which Turner later reposted on her Instagram Story with the caption, "J Sisters coming atcha." The actor also posted a photo of all three "J Sisters" cuddling up to the boys, along with the caption, "It’s #thejonai comin atchya!"

The Jonas family trip to Penn State is just one of several adorable group outings that the musicians have enjoyed with their significant others recently; in late March, Chopra and Turner joined the Jonas Brothers on a trip to Miami, where they relaxed on a yacht and posted videos of themselves dancing to their comeback single, "Sucker." "[The J-Sisters] have this camaraderie now that they feel is not only friendship, but it's family," Joe told AOL back in December about how the band's significant others get along. "That's what every brother wants. You want to have that relationship where everyone looks out for one another."

"They’ve gotten really close, and it’s really cool to see their friendship grow," Jonas continued, revealing that Chopra and Turner "were friends before we even met. Sophie shot X-Men on the same lot that [Priyanka] shot Quantico for a while, so they would spend a lot of time together, which made it even more special once Nick and Pri obviously got together. It’s cool."

It's not just Chopra and Turner who have become very close since they joined the Jonas family — in February, Danielle Jonas wrote a sweet birthday post for the Game of Thrones actor where she revealed that Turner has a close relationship with Kevin's daughters as well. "Happy birthday @sophiet!!" Danielle wrote on Instagram alongside a sweet photo of the pair. "My girls and I are so blessed to have you in our lives, they can’t get enough of their aunt sophie! You deserve the world and i hope you’re having an amazing birthday! love you."

With the "J-Sisters" by their side, it's clear that the Jonas Brothers are happier than ever to be back on tour, performing for their fans. And now that people know they could possibly see Sansa Stark at their concerts, we imagine that all upcoming Jonas Brothers shows will be sold out.