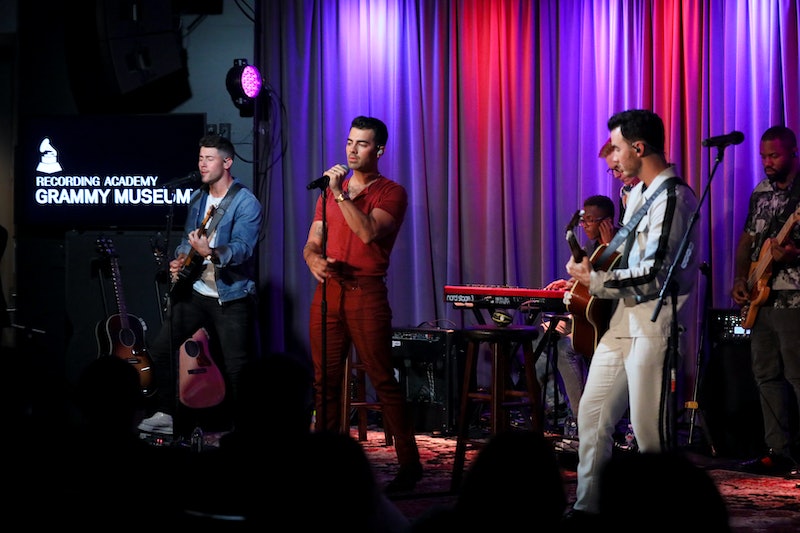 Every Jonas Brothers fan has heard all the details about their favorite band's major 2019 return. But what they may not have realized is that one song in particular ended up motivating Nick, Joe, and Kevin Jonas to finally get the band back together. The Jonas Brothers' reunion was inspired by "Year 3000," and you can thank a random "group of college-aged guys" for bringing the classic jam to the brothers' attention once again.

During an appearance at the Grammy Museum on Monday, Oct. 7, the JoBros revealed that their major 2019 reunion started with "a few Twitter comments" from users who wished that the band would reunite. They also really wanted to hear "Year 3000" live again, since, as Nick explained, the band dropped the hit from their setlist prior to breaking up. According to the singer, it was these young men who inspired Nick to get the band back together. "[They] were young enough to love it without any inhibitions or insecurities about loving the song, whether it was a guilty pleasure or not," he recounted, per Entertainment Weekly.

Their unabashed love for "Year 3000" stuck with Nick because it made him realize that him and his brothers had lost touch with the fun-loving sides of themselves that their earlier career embodied. The fact that fans still loved the song that kickstarted their career made him rethink why they broke up in the first place. "We were so at odds with our authentic selves and our creative center and what made us who we are, which I think are fun-loving, don’t take ourselves too seriously guys, that we had started to let our insecurities lead the conversation," he confessed.

Seeing fans embrace the Jonas Brothers' sillier music made Nick realize that he, too, could embrace their earlier recordings. “I started to think about that quite a bit, that maybe there’s a whole new group of fans who actually were embarrassed to like the Brothers at a certain point in their life and now can actually just enjoy it," he said, adding, "the things we were embarrassed about when we were younger become the things we love about ourselves when we’re older."

After re-embracing the band's older songs, Nick started talking to his brothers about playing some of them again. "I started the conversation with Kevin first and said, ‘What do you think if we just played a few songs?'," he recounted. Eventually, the band was back together, resulting in their 2019 comeback album Happiness Begins.

Now on their reunion tour, Nick, Joe, and Kevin have no qualms about performing their cheesy breakout hit. "Year 3000" is a fan-favorite staple on their Happiness Begins Tour setlist. As Nick told fans, their breakout hit became the springboard for their big reunion, and now it's a staple of a Jonas Brothers show.

But the band's love of "Year 3000" wasn't the only thing the Jonas Brothers discussed at the Grammy Museum. Kevin revealed during the interview that the band was "still writing and recording quite a bit." They didn't promise any new releases soon, but Joe did confirm, "We try to get in the studio as often as we can."

Now that the band embraced "Year 3000" once again, perhaps a sequel to the beloved hit will be their next move?

More like this
See 'Twilight' Stars Together Again For A Sweet Cullen "Family Reunion"
By Stephanie Topacio Long
The Indigo Girls Taught Me Queer Relationships Could Be Messy, Too
By Hannah Soyer
Paris Hilton’s Tweet About The 2006 “Holy Trinity” Photo Will Make You Feel Old
By Marina Watts
The First Trailer For 'That '90s Show' Includes So Many Nods To The Original Series
By Jack Irvin, Alyssa Lapid and Grace Wehniainen
Get Even More From Bustle — Sign Up For The Newsletter