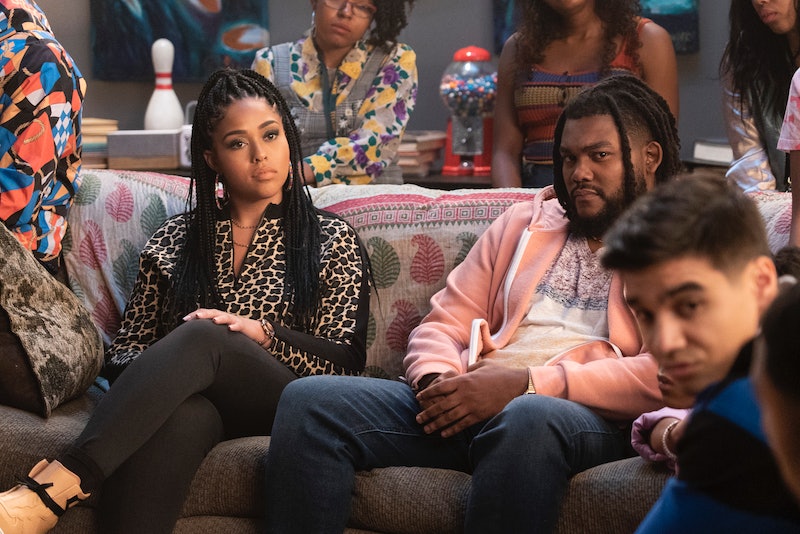 The wait is over. Freeform aired the Jordyn Woods episode of grown-ish on Wednesday, July 24, and, in it, the first-time actress' character became part of a powerful conversation surrounding mental health in the black community. As previously revealed by People, Woods portrayed Dee, a Cal U freshman with a “sweet soul with a soft-spoken and sincere vulnerability.” Those attributes were on full display when Dee assembled with fellow Hawkins Hall residents at a meeting called by RA Aaron (Trevor Jackson) during the black-ish spinoff's latest installment, titled "Only Human."

Aaron organized the gathering (with an assist from a false promise of a free shrimp, by the way) to address a recent sobering occurrence in which one of the dorm's residents exhibited signs of depression and suicidal ideation. Understandably shaken by the incident, Aaron wanted to check in with his students and start a dialogue to see if anyone else may be in need of mental health resources.

While things got off to a bit of a rocky start, Dee soon opened up about her feelings to the group, volunteering that she's felt "hella depersonalized before" — after Aaron explained what depersonalized actually means, of course. For the record, Woods' character also raised her hand when Aaron asked if anyone present had ever felt like a rapper whose name starts with "Lil" or had thought about getting a face tattoo. The humor was certainly a welcomed strategy to lighten the mood.

Soon afterward, however, Dee got real real about her emotional struggles. “I don’t want to let anyone down," the college student character admitted during the group discussion. "There’s so much pressure between trying to keep my grades up and missing my family. I feel like sometimes I cannot even shake the sadness.”

Aaron's simplistic advice — go see a therapist or counselor — came with its own issues, however. As it turns out, Dee (and others) had already tried that and called the process a "joke" in which she waited two weeks for a 15-minute appointment "with some old white lady who kept telling me to I look like some actress named Jackée."

Surely Charlie (Deon Cole) could use some of his clout as a Cal U dean to help the room full of students who'd had similar experiences to Dee, right? Not quite. “We are the ones struggling with the normal stresses of college, going to a predominantly white school, and having to deal with the pressures of being black in America,” Aaron pleaded to Zoey's (Yara Shahidi) uncle in one scene.

Alas, the inability to provide more support to students of color boiled down to budgetary constraints, as Charlie explained. What followed was Aaron's sad-but-true mic drop moment of the episode. "They’ll spend millions of dollars on a new arena to make more millions off black bodies, but won’t invest in our minds," Aaron accurately noted. "It's baffling to me."

Woods' group scene — which allowed her to share screen time with Jordan Buhat (Vivek), Diggy Simmons (Doug), and guest star DC Young Fly (Rafael), in addition to Jackson and several more grown-ish newbies — ended up being her only shining moment in the episode. The conversation Dee helped start, however, did lead Aaron to create a Black Minds Matter initiative which is sure to have lasting effects at Cal U.

While it's unclear if fans will see Dee on grown-ish again, Woods recently told People that she “would love to hopefully come back to the show one day.” After all, the episode's subject matter is close to the 21 year old's heart.

“As a young adult myself, it was a cool way of being a part of a bigger conversation," Kylie Jenner's former best friend explained to People. "And then the episode happened to be on mental health, which was even more important to me to discuss.”

Plus, as Woods pointed out to the magazine, Dee's emotional candor "helped to bring everyone out of their shells and helped them talk about how they feel as well." Sounds like a voice that could only bring a healthy perspective to Hawkins Hall — and grown-ish as a whole.