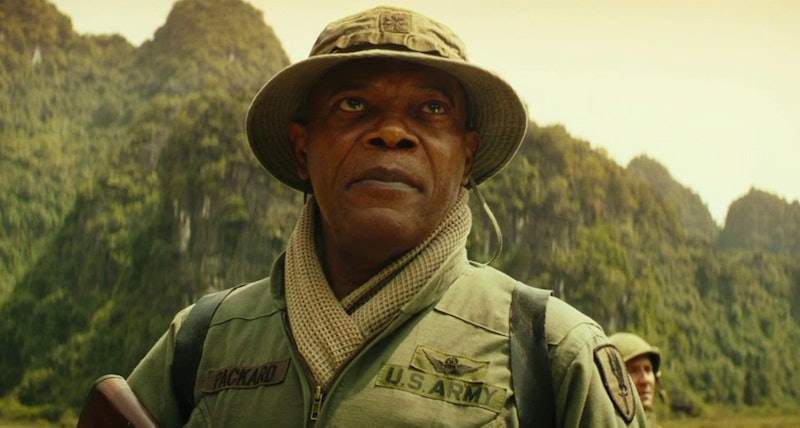 King Kong is one of the most well-known cinematic monsters in history. And when director Jordan Vogt-Roberts took on the latest iteration of the beast for the big screen, he wanted to pay homage to some of cinema's other great monster flicks. It helped that Samuel L. Jackson, who had a memorable role in Spielberg's Jurassic Park, secured a meaty role in Kong: Skull Island. So with Jackson in tow, Vogt-Roberts knew what he had to do. Here's how the incredible Jurassic Park easter egg in Kong: Skull Island (which hits theaters March 10) came to fruition.

Jackson plays Lt. Colonel Preston Packard, a war-hardened leader of a helicopter squadron tasked to explore an uncharted island in the Pacific Ocean. Little does he know, he and his men are about to be confronted with the larger-than-life Kong. When their helicopters take off into the unknown, Jackson as Packard delivers this bit of dialogue: "Hold onto your butts."

The already iconic line, of course, is a direct reference to 1993's Jurassic Park, in which Jackson delivers the same quote as his character Arnold. So how on earth did Vogt-Roberts get Jackson to deliver the same line, in an entirely different monster movie, nearly 25 years later?

"Honestly, I put it in the script and thought for sure he was going to say 'No way,'" the director tells me at the Los Angeles press day for the film. "I didn't even mention it [to him]. I didn't say anything about it. Then it happened, and I was like, 'OK, we did that.'"

While this iconic allusion was never discussed between the actor and director, fans of the famed dinosaur film will likely be delighted at the mention. And Vogt-Robert's success in sneaking in the reference had him wishing he'd done it with other members of his acclaimed cast, too.

"I’m regretful because there were like four or five [Big] Lebowski lines that I was trying to work through the script to get John Goodman to say, like 'You’re over the line,' or 'Mark it zero' or something like that. I was just so nervous about it," he admits. "But the Sam one, honestly, he was just game for it and I never talked about it. I had the writer put in the script as an homage and it just kind of happened."

Well, damn. Cheers to the ballsy director for delivering a reference audiences everywhere will surely appreciate.