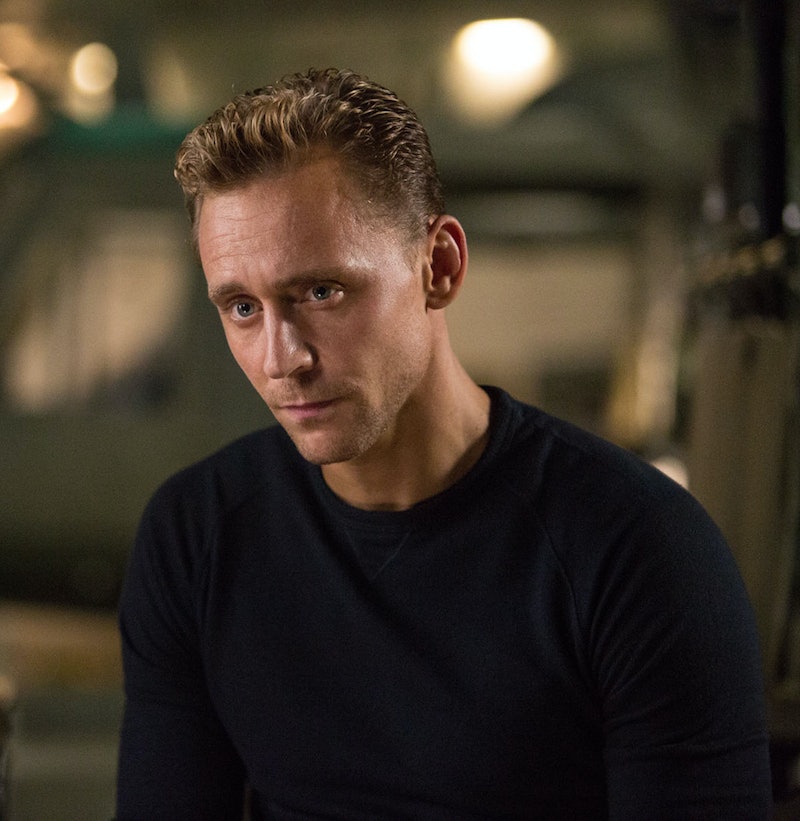 Tom Hiddleston likes to eat dessert before lunch. I know this because I've just watched him finish a piece of chocolate cake before diving into a plate of chicken and vegetables. We're sitting in a makeshift room — composed of heavy fabric walls, a couch big enough for two, and a short table that holds his meal and "morning sugar rush," as he calls it — inside of a grandiose ballroom in Downtown Los Angeles. Hiddleston's here to promote his latest, Kong: Skull Island, and I'm here to try to uncover a yet-to-be-discovered layer of the man that is Thomas William Hiddleston — beyond his dining preferences.

Because Hiddleston isn't your average actor. Sure — many performers have something unique to offer — but Hiddleston represents something more than his rolodex of impressive performances. He has a ravenous fan-base, recently dated Taylor Swift, could very possibly step into the shoes of James Bond, uses words like "predilection" and "cognoscenti" in casual conversation, and is somehow, despite it all, entirely unfazed. It's an odd cocktail — one that has ignited a maelstrom of media interest, including my own. Because here I sit, a member of the aforementioned press, begging for Hiddleston to drop a seed of wisdom, a charming childhood anecdote, a reference to Swift (yeah, right) or some such pearl that will send readers into a tizzy. But so far all he's done is impress me with his memory.

Upon entering the shoebox of a room (if I can even call it that), he tilts his head to the side and says, "Have we met before?" And we had, actually — very briefly during a group interview promoting the Hank Williams biopic I Saw The Light nearly a year ago. I tell him as much, and he smiles — "yes, that's right," — offering me both a seat on the couch and a slice of chocolate cake.

I politely decline the latter — given my penchant for clumsiness I'd prefer not to interview the British heartthrob with a blouse covered in frosting. He asks me again (Hiddleston is very generous, it seems) and I again, decline. So we settle into the couch and I begin the conversation by relaying a message. Earlier in the day the film's director, Jordan Vogt-Roberts, asked me to tell Hiddleston this: "It's only forever." I assume the sentiment is a reference to the lyrics of David Bowie's "Underground," (as any Hiddlestoner knows, the man loves Bowie) yet the actor assures me it's not.

"The thing about making movies is that you're constrained by time and daylight," he tells me. "When you're assembling the jigsaw puzzle with all its intricate pieces you want every piece to be perfect. We are both perfectionists, and when I would ask for another take because I knew it could be better, he would say, 'I think we got it,' and I would say, 'It's only forever.' It became a kind of comradely slogan that was our call to arms every morning."

Vogt-Roberts elaborates later, telling me: "Tom is really frustrating to be around because he’s tall and handsome and knows a lot about everything," the director jokes. "Tom ascribed the right philosophy of 'we’re making this forever.' He’s a total dream for a director because he gives a f*ck. He might care too much at times, but you have no choice but to like completely love him."

The simple sentiment, it's only forever, seems to be more than an on-set mantra for Hiddleston. The Englishman is a perfectionist — this we knew — but he's also, in every way, an intentional man. He chooses his roles carefully, he determines his words with a sense of responsibility, and he aligns himself with people he continues to champion (even if the relationship is no more). "It's only forever," may be, in Hiddlespeak, his own version of YOLO.

"It's such an honor to be making a Kong film. The character has been around for almost 100 years. I wanted to contribute to the legacy in a meaningful way, and knowing that it's forever is a very motivating force to get you out of bed and to do your best."

Hiddleston simply wants to put his best foot forward at all times, and being the best requires dedication, precision, research, and patience. It's part of the reason he took it upon himself to help craft his Kong character, Captain James Conrad, into something he's proud of.

"Part of the satisfaction I get from the job is cobbling together strands of academic research, ideas I've had while I'm running around the park..." he says. "The character that was presented to me was an adventurer, a tracker, and a hero. He was someone with a previous military history."

With these details in mind, Hiddleston went to work. "I got to build the idea that he was a British SAS, he was a specialist in reconnaissance and the recovery of lost soldiers," he says, rubbing the short stubble around his chin. "I did some research into a jungle warfare school in Malaya with the British Army where they trained soldiers, the SAS — the Special Air Service — who are the most highly trained Special Forces unit of the British Army."

At this point in our conversation I do the unthinkable: I interrupt Tom Hiddleston. You see, I'm in the middle of reading a book titled The Complete SAS Survival Manual, a handbook published by a former member of the SAS, and this seems like too much of a strange coincidence not to mention.

Hiddleston is thrilled to hear of our shared interest, and recommends another book to me — The Tracker by Tom Brown Jr. ("I believe it's something of an American classic.") — but when I ask how he'd fare in his character's uncertain situation, an uncharted jungle in the middle of nowhere, he just laughs.

He references The Tracker, saying: "Tom Brown grew up in the Pine Balms of New Jersey. His best friend was Native American, and [his friend's] father was a tracker," he says, then describes this outlandish activity Brown would attempt: "They used to call it 'bear smacking.' The tradition was to get close to a wild bear, smack it on its bum, and run away before you got eaten."

At this point I consider interrupting Hiddleston for a second time, not to deliver any personal "bear smacking" anecdotes, but to get our conversation back on track. (Every passing minute is precious, after all.) But, I remind myself that this is Loki I'm talking to, and if the God of Mischief wants to muse upon slapping a bear on the bum, then by God I'm not going to stop him. Luckily, Hiddleston has a point.

"Tom Brown was trained by this tracker in essentially living in complete harmony with nature — surviving off the land, understanding the behavior of wild dogs — I think something about that is appealing," he says. "I’m not very good at that, but I think it’s information that 100-200 years ago all of us would have understood more deeply because it would be handed down. Our connection to nature was more alive before people became inhabitants of urban cities."

Hiddleston, who was born in London and attended both Cambridge and the Royal Academy of Dramatic Art, does not appear, at first glance, to be someone who has spent much time in the often unpredictable outdoors. But that's where I'm wrong.

"I feel like I need to get into nature every day, and I go slightly mad if I don’t. I love running in the rain," the 36-year-old admits. "A healthy connection to nature makes us all more human, not less. As a race we are so overdeveloped. We’ve invented so many new technologies to make our lives easy, but to just recognize on a regular basis that you are flesh and blood, that you are an animal, is a really healthy thing."

Hiddleston sees the importance of constantly connecting with nature, even when he's working. As someone who grew up in the woodsy Pacific Northwest and reads survival manuals in her free time, I appreciate the sentiment.

"I spent a lot of time in Australia last year and on the Gold Coast in Queensland," he says, referencing his time shooting the latest Thor film. "That’s part of the pathways that the humpback whales travel through on their way to The Arctic. From the beach I saw these whales breach. It makes you feel so calm because you know that out there, there are things that are bigger, more ancient, more compassionate, more intelligent than us. It’s a very cool thing."

As an actor who is exceedingly in-demand, it's heartening to hear Hiddleston speak of things bigger than himself. And as our conversation comes to a close, and after I've packed my bag and vacated our small respite, he calls after me. "It's only forever," he says through the cloth wall.

The notion follows me throughout the day. Sure, it sprouted on a film set, but these three words hold a powerful message: Carpe diem, seize the day, live life to it's fullest, etc. Because what you do in this life matters, and Hiddleston knows this; Because people can create real change; Because our time on this planet is limited; Because, let us not forget, it's only forever.