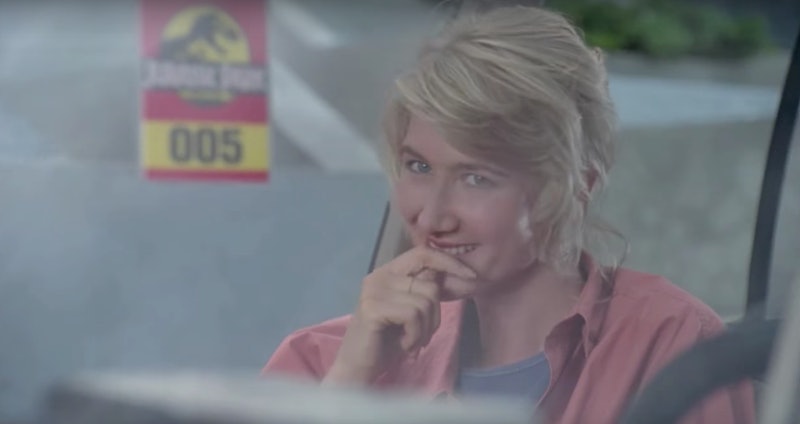 It's been over 25 years since Jurassic Park came out in theaters in 1993, and since then there have been a few not-super-successful sequels and a very popular reboot. But regardless of what has come after it, there's no denying that the original had a very big impact on pop culture and movies since. It's most recent pop culture contribution: two stars from the first film had a little Jurassic Park reunion and the photo will make all '90s kids' hearts burst.

At the 24th Critics' Choice Awards, which took place Jan. 14 in Santa Monica, Jurassic Park stars Laura Dern and Joe Mazzello met up and took a photo that had fans dying at the nostalgia of it all. Dern, as many know, played the strong and incredibly intelligent Dr. Ellie Sattler, a paleobotanist who gets tangled up in the mess that is Jurassic Park on Isla Nublar. And, though it might be hard to recognize him since he's actually hit puberty, Mazzello played the role of Timmy, the little grandson of John Hammond, the billionaire mastermind behind the park and rebirth of all the dinosaurs. Together, their characters tried to survive the horrors of bringing back millions-of-years-old dinos over two decades ago.

Mazzello posted the photo, captioning it: "Reunited with my Jurassic Park costar, the beautiful and incomparable @lauradern at the #criticschoiceawards. Highlight of my night! #JurassicPark." It makes sense that it was the highlight of his night, because it was definitely the high point for any fan's too. Dern also posted the pic, writing, "#jurassicpark is alive at the #criticschoiceawards."

It might have come as a surprise that both little Timmy and Dr. Ellie Sattler were at the Critics' Choice Awards, but it actually shouldn't be much of a shock. Mazzello plays the role of John Deacon, the bass guitarist for Queen, in the movie Bohemian Rhapsody. The movie's press and award season has focused a lot on Rami Malek as the iconic Freddie Mercury, of course, but Mazzello has been posting up a storm all about filming the movie and awards season. The movie has already been nominated a bunch of prestigious awards, and most recently dominated the Golden Globes, winning Best Motion Picture — Drama and Best Actor in a Motion Picture — Drama for Malek. It was nominated for three Critics' Choice Awards; however, it failed to take any home.

Dern was there for her work as well, of course, being nominated for her HBO TV movie, The Tale, in which she plays a filmmaker who comes to the realization that she was sexually violated as a young teen. The movie was nominated for Best Movie Made for TV, Best Actress, and Best Supporting Actress in a Movie Made for TV or Limited Series.

Awards aside, as soon as the photo went public, fans immediately took to social media to share their excitement. "We should keep all of the cast in amber, just in case," tweeted graphic designer Chris Christoforos. Protect these two at all costs!

It's been 25 years, but seeing these Jurassic Park co-stars together again, it feels like just yesterday we were watching Dern get excited over dino droppings and Mazzello hiding in a kitchen.