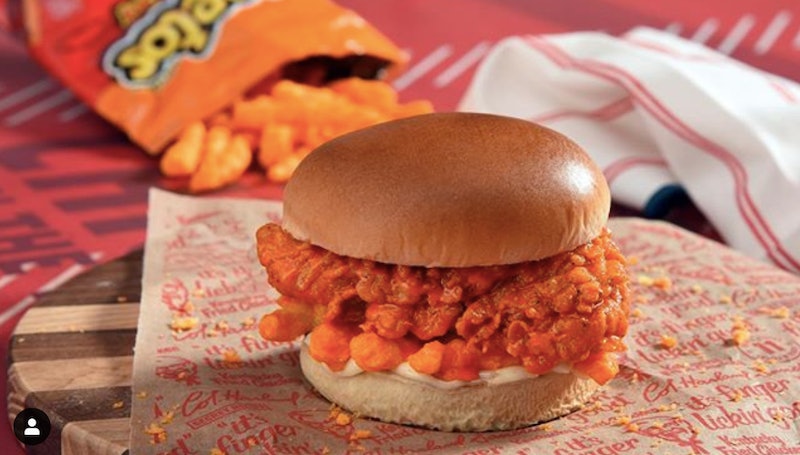 You know how some people like to put their chips on their sandwich, instead of on the side, for some extra crunch? Well, this new offering from KFC is like a more extreme version of that. As reported by Chew Boom, for a limited time, KFC will have a Cheetos Sandwich. Contrary to the name, it is not just a bunch of Cheetos between two slices of bread. It is a bunch of Cheetos between two slides of bread with chicken.

The KFC Cheetos Sandwich will go on sale at KFC locations nationwide on July 1 and will be available for four weeks. The sandwich was previously part of a test-run in select cities in Virginia, North Carolina, and Georgia. And, apparently, it was a success, because now the wacky sandwich is set to conquer the nation.

As for what exactly makes up the sandwich, an extra crispy chicken filet sits atop a layer of crunchy Cheetos. The chicken is covered in a special Cheetos sauce (more on that below), and there's also mayonnaise on the bun that helps hold the Cheetos in place, according to Business Insider.

In their review, Business Insider called the sandwich both "shockingly good" and "weirdly delicious". "

Delish also reviewed the sandwich and reported, "The real tastebud teaser, though, is the special Cheetos sauce drizzled over the chicken — OH MY ACTUAL HEAVENS IS IT GOOD — with just the right amount of mayo to balance out the cheesy kick."

Meanwhile, AOL Lifestyle gave a more detailed description of the sauce, and explained, "The Cheetos sauce is like a liquified Cheeto, but in the best way. It's a bright orange cheese sauce that has the same texture and consistency as hot sauce." The site also noted of the sandwich, "it all comes together surprisingly well."

According to Business Insider, KFC executives said they would like to do more mash-up menu items like this one in the future. The site notes that the fast-food chain also recently released Cinnabon Dessert Biscuits, which combine a KFC biscuit with Cinnabon's cinnamon and brown sugar glaze and cream cheese frosting.

While the Cheetos Sandwich will be available nationwide, KFC and Cheetos fans in New York City will have the chance to experience some more recipes that combine the brands. As reported by Delish, a KFC and Cheetos pop-up event will be held in the city on Thursday, June 27. It will feature a tasting of the new sandwich as well as items exclusive to the event including "Cheetos-fied KFC Hot Wings, Cheetos Loaded Fries and KFC Mac and Cheetos Bowl." The pop-up will be held between 4 p.m. and 8 p.m. at the KFC on E. 14th Street in Manhattan. More information about the event can be found here.

This is not the first time Cheetos has lent its crunchy flavors to other recipes for a pop-up. In 2017, a Cheetos restaurant, The Spotted Cheetah, opened in New York City for a limited time. It featured dishes such as Cheetos Meatballs, Flamin' Hot Mac N' Cheetos, and Cheetos Sweetos Sweet and Salty Cookies.

As with the restaurant, you'll have to act fast if you want the latest Cheetos mash-up, the KFC Cheetos Sandwich. So get ready for July 1, because the countdown will be on.