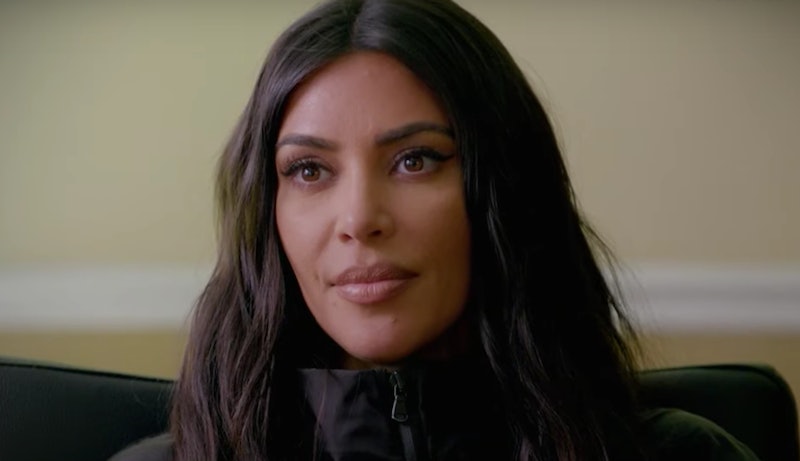 Kim Kardashian goes to war with mass incarceration in the new trailer for Kim Kardashian West: The Justice Project. The two-hour prison reform documentary, set to debut on Oxygen on April 5, will follow Kardashian as she explores the cases of Dawn Jackson, Alexis Martin, Momolu Stewart, and David Sheppard, four prisoners whom legal experts believe to be wrongfully incarcerated. In the trailer unveiled at the Television Critics Association press tour on Saturday, Kardashian travels to the prisons where the four prisoners are held and lobbies for their release.

“There is a mass incarceration problem in the United States,” Kardashian narrates in the clip as she meets with legal experts and public officials. She adds, “I went into this knowing nothing, and then my heart completely opened up.” Alice Marie Johnson, the grandmother granted clemency after Kardashian lobbied Donald Trump to overturn her life imprisonment charge for a first time nonviolent drug offense, also appears in the trailer and says, “Kim went to war for me.”

Kardashian, who also served as executive producer on the documentary, appeared on a panel at the TCAs with fellow producers Vince DiPersio, Farnaz Farjam, and Jessica Jackson to discuss the project on Saturday. Kardashian said, per Deadline, “Once you get so deep into the system — and I was really not aware of so much that [has gone on] for so long — you just can’t give up."

The reality TV personality also weighed in on her White House visit to advocate for Johnson’s case and whether or not she wielded any influence with Trump. “There are a lot of issues that I might privately speak about with people in power that I feel strongly about,” she said. “However, I stay extremely focused on an issue we see eye to eye on. I have been just really focused to get a lot done, keep my eyes focused on what we connect on.”

On the heels of her crucial role to secure Johnson’s release, Kardashian revealed last April that she’s studying to become a lawyer and intends to take the bar exam in 2022. "I just felt like I wanted to be able to fight for people who have paid their dues to society,” she told Vogue at the time. “I just felt like the system could be so different, and I wanted to fight to fix it, and if I knew more, I could do more."

If Kardashian’s newfound legal path seems arbitrary, it isn’t. Her late father, Robert Kardashian, was a lawyer who famously represented O.J. Simpson in his 1995 murder trial. At the TCAs, she reflected on their shared journey. “There are times when I can be frustrated, up studying really late and wonder how he did it,” Kardashian said, per E! News. “[He] must have been going through some of the same things that I have gone through, so it would have been exciting to talk to him about that. I know that he would be so, so proud."

Kim Kardashian West: The Justice Project debuts on Oxygen on April 5 at 7 p.m.

More like this
A New Netflix Doc Will Explore The Unsolved Murder Of Jill Dando
By Sam Ramsden
North West Will Make Her Acting Debut Alongside Mom Kim Kardashian
By Radhika Menon
Everything You Need To Know About Kanye's Post-Kardashian Dating Life
By Bustle Editors
Did Pete Davidson Remove His Kim Kardashian Tattoos? Photos Point To Yes
By Alyssa Lapid
Get Even More From Bustle — Sign Up For The Newsletter
From hair trends to relationship advice, our daily newsletter has everything you need to sound like a person who’s on TikTok, even if you aren’t.