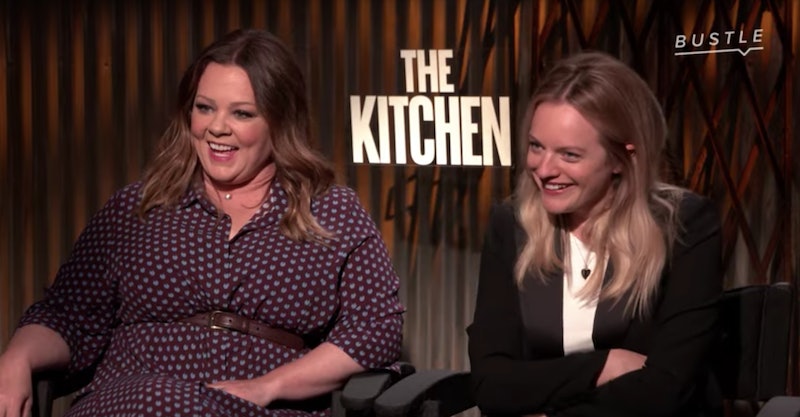 The Kitchen is a serious movie. Despite starring some of today's greatest comedic actors, the mob movie isn't a satire or a parody. Hitting theaters on Aug. 9, The Kitchen stars Melissa McCarthy, Elisabeth Moss, and Tiffany Haddish as the wives of three Irish mobsters who take over the business to survive after their husbands are sent to prison. The Kitchen is just as tense and dramatic as the rest of the mobster movie canon, so at the film's LA press junket, Bustle sat down with McCarthy, Moss, costar Domhnall Gleeson, and writer/director Andrea Berloff to find out how they feel about the genre, including their dream roles and their own gangster nicknames.

In this '70s-set film, the women at the center take over their husbands' criminal empire in Hell's Kitchen and prove to be adept at being gangsters, with all of the menace, cunning, and ruthlessness that goes with the job. So, naturally, Associate Entertainment Editor Mallory Carry had to find out if the cast had picked out their own monikers. "High Pants McGillicutty," says McCarthy without hesitation when asked for her mob name. "I'm the one trying to get that started." Moss adds, "Mine is Tiny Tyrant. High Pants McGillicutty and Tiny Tyrant. Rolls off the tongue!"

In keeping with the mob theme, the cast also shares their favorite examples of the genre. McCarthy keeps things classic by claiming The Godfather as her fave — while also revealing that she's read the books — while Berloff goes off-genre for her pick. "Thelma & Louise," the director says. "Which is not a classic gangster movie, but it is women who are not perfect, who are classic anti-heroes behaving badly. They are violent, they make mistakes, and yet we love them in the end and are empowered by them." We'll allow it!

There are some tough characters in every mobster movie. In The Kitchen, it turns out what the women themselves are pretty intimidating and dangerous. But the cast seems to agree on which actor wears the crown as far as mob movie villains go. "Joe Pesci in anything," Gleeson says. "When he turns it on, it's terrifying. He's great." Moss independently concurs with her cast mate, saying of Pesci's role in Goodfellas, "There's a 'psychoticness' I think to that character, that temper, I think...oof...scary."

You can see the rest of Bustle's interview with the cast and director of The Kitchen in the exclusive video below.

You probably wouldn't want to meet any of their Kitchen characters in a dark alley, so seeing how loose and fun the actors are in real life just reinforces how incredible — and in some ways, unexpected — their latest performances are.