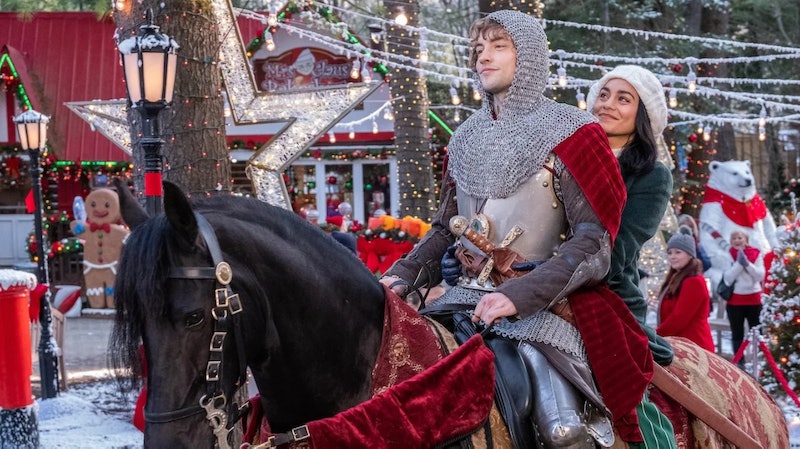 There is nothing like a midwestern Christmas. Snow blankets the trees, hot apple cider flows freely, and homes are adorned with warm twinkly lights. For Brooke (Vanessa Hudgens), it appears as though it is going to be a particularly quiet Christmas this year — until she mows over a time-traveling knight in full armor who has inexplicably landed in small-town in Ohio to search for his quest. Yes, you read that right.

The Knight Before Christmas, Netflix’s newest holiday romcom out on Nov. 21, follows the unlikely romance between a science teacher and a medieval knight because, why not. Hudgens plays a teacher who has faced all-too real heartbreak in the past, and just happens to find herself in an unbelievable, magical (read: bizarre) situation. "Brooke has just been cheated on and is not in the place where she wants to fall in love when we first meet her,” Hudgens tells Bustle over the phone. Then, “this extremely charming, handsome knight comes...and they fall in love and she can’t even wrap her head around how or why he’s here," she says, admitting that, like her character does in the film, forgetting the rules of reality is the key to what makes holiday films so special.

Recently breaking the rules of reality was Hudgens' 2018 Netflix holiday movie, The Princess Switch. In it, Hudgens played a humble baker who meets her royal look-a-like and — logically, of course — switches places with her, Parent Trap-style. The two aren't immediately related, they're just two identical strangers, and despite it being unimaginable, it was popular enough to warrant a sequel where a third identical doppelgänger will make her way into the mix (coming to Netflix in 2020). Considering this and her new film, Hudgens, for her part, fully owns that you have to "suspend disbelief for a moment" when watching Christmas films that are sometimes a little nonsensical.

Holiday romances have a way of pulling off these nonsensical maneuvers and warming our hearts to the point where we don't really apply logic and reason — we still watch them and forgive their pitfalls because they allow us to escape the mundane. The holiday genre is earnest and unpredictable and totally singular. Christmas-time films are some of the only places where you can blur the line between fantasy and reality without questions from an audience of otherwise reasonable adults.

The Knight Before Christmas is no different. The film switches between magical curses to everyday heartaches at a dizzying speed. At one point, Sir Cole (Josh Whitehouse) stumbles across an old crone in the woods, while Brooke avoids an ex in public. One of those things is way more relatable than the other.

The heightened fantastical elements in The Knight Before Christmas — A 14th-century knight. Who doesn't know what a TV is. And carries a sword. — is softened with the human aspects that span across any time period. And slowly, Sir Cole grows on Brooke for his chivalrous and *antique* ways — after all, men of a digital age don't often pull a sword out when you run into your ex-boyfriend.

As the two characters start opening up to each other about their family and their heartaches, their commonalities come to the surface. Love does, in a way, transcend logic, something Hudgens says is the theme of the film. “We as human beings try to figure everything out, but sometimes there is stuff that is unexplainable and sometimes it is good to just trust because it is OK to believe in magic.”

So if The Knight Before Christmas, and Vanessa Hudgens, ask us to suspend disbelief and lean into the magic, who are we to say no?