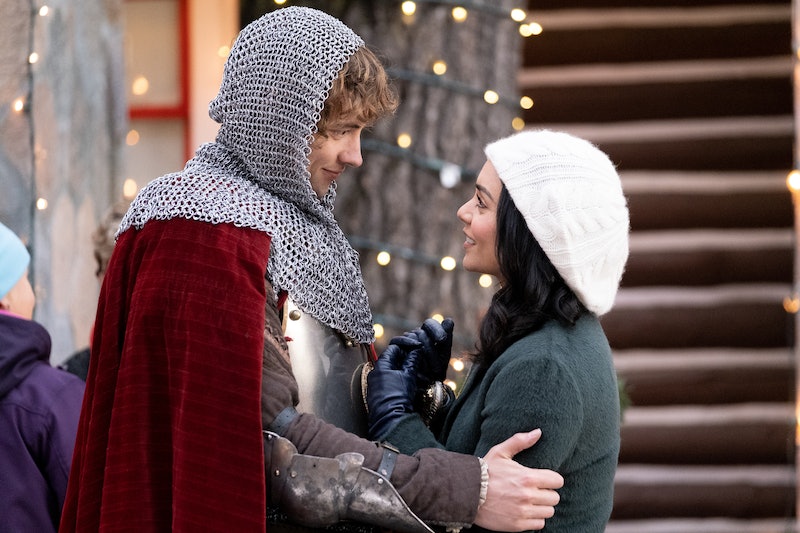 This holiday season Vanessa Hudgens will try and find her happily ever after with a knight in shining armor — quite literally. The trailer for Netflix's The Knight Before Christmas stars Hudgens as a science teacher, Brooke, who meets a medieval knight after he was magically transported to present day Ohio. While he's there to fulfill a secret quest, it just might be Brooke's broken heart that he's been sent to conquer.

The trailer for the rom-com, which starts streaming Nov. 21, starts with Brooke hitting Sir Cole (Josh Whitehouse, who was supposed to star in the recently canceled Game Of Thrones prequel) with her car. From there things get a a little less violent, and a lot more Christmasy. While others think this man who believes he's a 14th century knight has lost it, Brooke agrees to help him on his quest, if only because she feels responsible for his apparent memory loss.

Now, she's left chauffeuring him around as he discovers the radio, sun roofs, and modern Christmas fashion. (So. Many. Sweaters.) But, what's clear from this trailer, is that he's going to teach Brooke a few things, too, like how to learn to love again. Oh, and that time travel might not be as unbelievable as she thought. In other words: it's a Christmas movie lover's dream come true.

If all you want this Christmas is to Netflix and chill, don't worry they've got you covered with a whole slew of festive content. Along with The Knight Before Christmas, Netflix is dropping six other holiday originals like the animated comedy Klaus starring Jason Schwartzman and the teen rom-com Let It Snow starring Sabrina Spellman herself, Kiernan Shipka.

Fans will also get A Christmas Prince: The Royal Baby, which has Queen Amber (Rose McIver) and King Richard (Ben Lamb) adding a new bundle of joy to the royal family. Not to mention, an ancient curse because why not?

Fill your queue with holiday editions of your favorite Netflix shows like Nailed It! Holiday! Season 2, which will get you in the baking mood while also tickling your funny bone. Be warned, it might also turn you off to sweets completely after you see what the contestants have done to them.

For those who just can't get enough Hudgens this holiday season, rewatch last year's The Princess Switch, which had her playing double duty in a movie about a lookalike baker and royal trade places. It'll help prepare fans for next year's sequel, The Princess Switch: Switched Again, which has Hudgens taking on a third role.