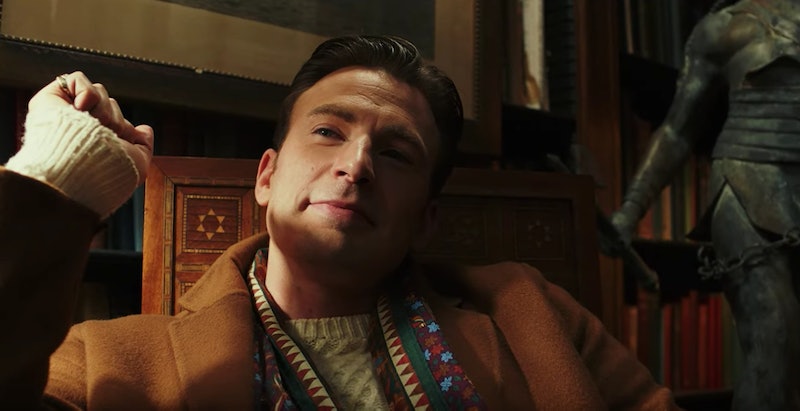 Many people say they would die to protect their family, but what if a member of that same family plotted to have you killed? That's the premise surrounding Rian Johnson’s new murder mystery thriller, Knives Out, which is made up of a star-studded cast of Hollywood legends, including Christopher Plummer, Jamie Lee Curtis, Daniel Craig, Michael Shannon, and Chris Evans, just to name a few. But while they all may look like innocent bystanders, the Knives Out trailer indicates that one of them is guilty of murder, but who? It's a question that Craig's character, Detective Benoit Blanc, grapples with throughout the footage, which means anyone could be the killer and everyone is a suspect — yes, even Evans.

The plot centers around the Thrombey family, whose head patriarch, Harlan (Plummer), dies under suspicious circumstances during a reunion with his extended family. Those who attended the gathering included Harlan's daughter Linda (Curtin), his son Walt (Shannon), and his grandson Ransom (Evans). Could one of them have done the deed? Craig's detective definitely seems to suspect foul play. All he has to do is unlock all of the family's secrets in order to discover who the guilty party truly is. But that could be easier said than done.

“The idea was to take everything I love about a great Agatha Christie story and put it into a new original story set in modern-day America,” Johnson told Entertainment Weekly about the film during a recent interview. “That’s kind of the essence of it.” And given that all of the suspects of the crime are members of Harlan's family, each of them could benefit from his demise, which gives everyone a possible motive.

“Harlan has built this massive empire up and he has a group of kids and their families who are all adults and who all to one degree or another live based on his success," Johnson explained during the same EW interview. "When the family fortune is kind of in question or up for grabs, that’s when the proverbial knives come out.”

But while every character has a unique, borderline comical personality, it's Evans who truly steals the spotlight, especially considering his character is unlike anything we've ever seen the actor portray before and a far cry from his Captain America persona in the Marvel franchise. “Chris is a terrific actor with great range, and in a change of gear from what we’ve seen him do lately he plays Harlan’s ne’er-do-well spoiled grandson,” Johnson added. “He turns on the swagger and devilish charm. It’s really fun to watch.” It also kinda gives the term "America's Ass" a whole new meaning.

The movie, which is set to hit theaters on Thanksgiving later this year, also stars Toni Collette, Don Johnson, and Katherine Langford with Ana de Armas taking on the role of Harlan's nurse before he met his untimely demise. Interested parties will have to watch the movie to figure out this whodunnit puzzle, but with an impressive ensemble like this, it's bound to be an exciting ride regardless of the outcome. One might even say it's a film to die for.

More like this
What’s New On Netflix: 'Never Have I Ever' & 'Indian Matchmaking' Return
By Arya Roshanian
Jamie Foxx Revealed The Question That Got Cameron Diaz To “Un-Retire”
By Grace Wehniainen
At 14, Rachel Sennott Had A Sexual Awakening While Reading 'Twilight'
By Samantha Leach
How To Stream 'Bodies Bodies Bodies'
By Morgan Leigh Davies
Get Even More From Bustle — Sign Up For The Newsletter