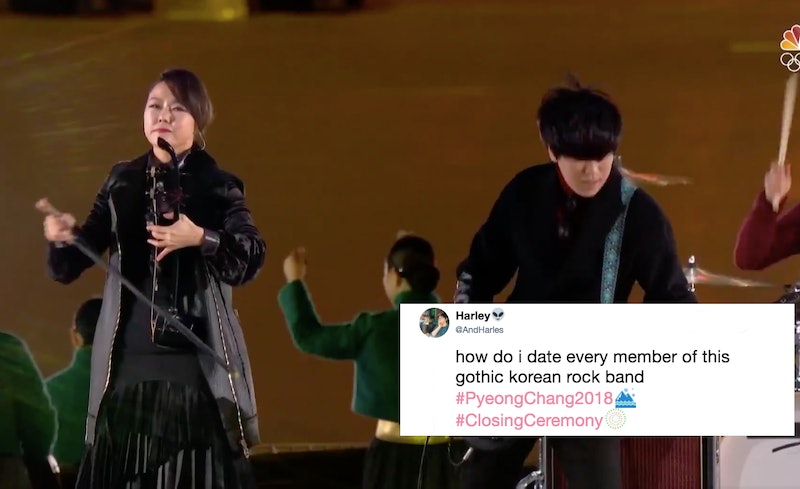 There's a lot to see during the Olympics Closing Ceremony, and a lot to obsess over. If you managed to drag your eyes off of Yang Tae-hwan, the 13-year-old guitarist lighting up that stage, then you may have noticed a Korean rock band blending traditional instruments with their genre — and notice Twitter did. Many people wanted to know who the Korean rock band performing with Yang was, because their music was all kinds of epic. As it turns out, the band is called Jambinai and mixing the old and the new is kind of their whole thing, whether the Olympics are happening or not.

The band was formed in Seoul, Korea, in 2009, and are active on Twitter and Facebook to connect with their fans. On Facebook, they describe their sound as "post-rock, metal, dark, traditional, and avantgarde but not 퓨전국악 ever," all of which seems to go with their general aesthetic when they performed at the Closing Ceremony. The band members are Ilwoo Lee, Bomi Kim, Eunyong Sim, Jaehyuk Choi, and Byeongkoo Yu, according to Facebook, and, according to people on Twitter, this band may be the best thing to happen to music since music was invented. And it's not hard to see why.

During the ceremony, Jambinai performed alongside Twitter's other obsession, 13-year-old rock star Yang, and their combined talents resulted in a musical interlude that was as much of a feast for the ears as the dancing and lights were for the eyes. According to the website of their international label, Bella Union,

"They met studying traditional music at Korea’s National University of Arts, and found they were united by a desire to present such music in a new way, 'to communicate with the ordinary person who doesn’t listen to Korean traditional music,' says Lee, the band’s principal writer."

Lee also added that they were "darker" than many other traditional bands, something which was also self-evident from their performance.

Their music is unquestionably rock-influenced, but it's a rock genre that's rooted in traditional instruments. The haegeum, the piri, and the geomungo are combined with a guitar to create a unique sound that fans watching could not get enough of. The band released a self-titled EP in 2010, their first studio album, Différance, in 2012, and Hermitage in 2016. A review of the latter album from Consequence of Sound called it an "angry" record, but one that was understandably so:

"A Hermitage is an wrathful record, billowing with a fierce anger for South Korea’s younger generation which, accordingly[sic] to Ilwoo Lee, faces a crisis of isolation and suspicion of the conservative forces which has led South Korea to be one of fastest growing economic super-powers."

Whatever emotions they were trying to convey on the Olympics stage was certainly felt, in part, by viewers who couldn't get enough of the band during and after their performance. Whether they wanted the band to come on tour in the United States, whether they wanted to date members of the band, or whether they were just incoherently screaming, it's clear that Jambinai has picked up several more diehard fans in the West thanks to their music. And, based on that same Noisey interview, this was a goal.