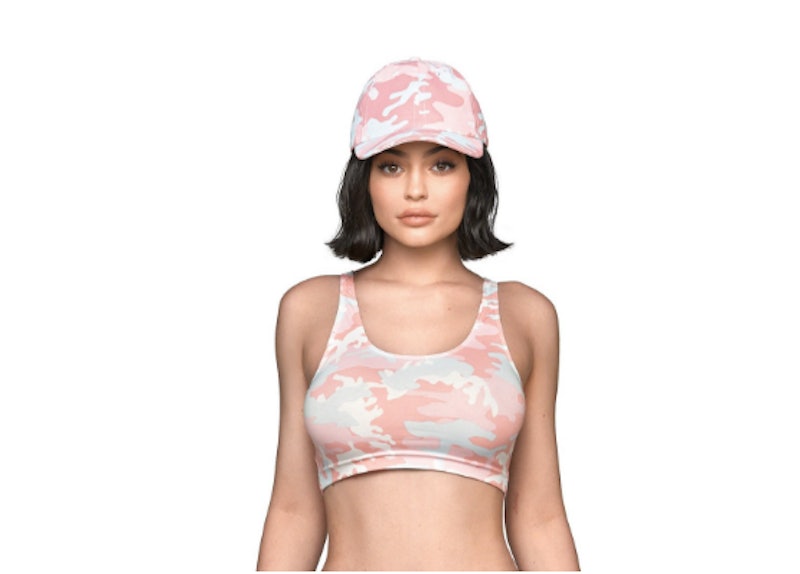 Camo print is officially back, and it's bringing a little bit of drama with it. Odds are you've seen The Kylie Shops' most recent collection by now. It's filled with crop tops, sweatpants, and bikinis all splattered with different colored camouflaged print. But, according to Teen Vogue, New York-based clothing brand PluggedNYC has accused The Kylie Shop of copying their designs.

Every Jenner launch is widely talked about, but this collection is taking it to a whole new level. After The Kylie Shop launched the Camo Collection on June 8, people on social media started calling the brand out, claiming the pieces were a form of cultural appropriation. Now it looks like someone else is taking issue with the designs. The brand PluggedNYC, which has been worn by Keke Palmer, Little Mix, and even Rihanna, according to their Instagram, specializes in — you guessed it — camo print. They believe that The Kylie Shop's designs are a little too similar to theirs, and took to social media to call the issue out. In a statement to Bustle, a rep for the brand said, "At the end of he day money is power and the kardashains have both. It doesn't matter if she wore my stuff previously then literally shoots same Concept with same shoes and all..But at the end of day this will be all blown over tomorow her sales will continue, I can never have a billboard in the middle of the city. Money is power, they can take a whole movement just bc of prices. Money rules the world if you haven't noticed [sic]." Bustle has also reached out to Jenner and The Kylie Shop for comment.

At first glance, the two lines do look alike. Both brands offer three different colored camo-printed separates on their website. The main difference is that PluggedNYC offers cargo material, while The Kylie Shop's are cotton. According to the social media post, PluggedNYC's CEO Tizita believes that they were the first brand to bring back the trend, saying, "When you really Pablo... I am the influence *drops mic. Copy & Paste down to the shoes I used on my models."

Jenner and PluggedNYC have some history, too. The brand claims in several social media posts that the A-lister allegedly had previous contact with the brand about wearing their designs. Jenner has posted a selfie while wearing their green off-the-shoulder top on Instagram.

None of this has stopped Jenner's styles from flying off the virtual shelves though. As of June 9, all three colors of The Kylie Shop's camo bikinis are sold out and the pants are on their way there as well. It's worth noting that PluggedNYC has a camo swimsuit out as well, although it has a slightly different cut. There is also a significant price difference between The Kylie Shop and the NYC brand. Jenner is selling her separates for $20 to $45, while PluggedNYC's cost between $40 to $115.

As of June 9, neither of the brands have released an official statement beyond what PluggedNYC has posted on social. People on Twitter have a lot to say about the clothing comparison. While some people think it was just a coincidence, others have much stronger opinions.

Is it about the camo or the designs?

No beating it around the bush here.

It will be interesting to see how this one plays out.