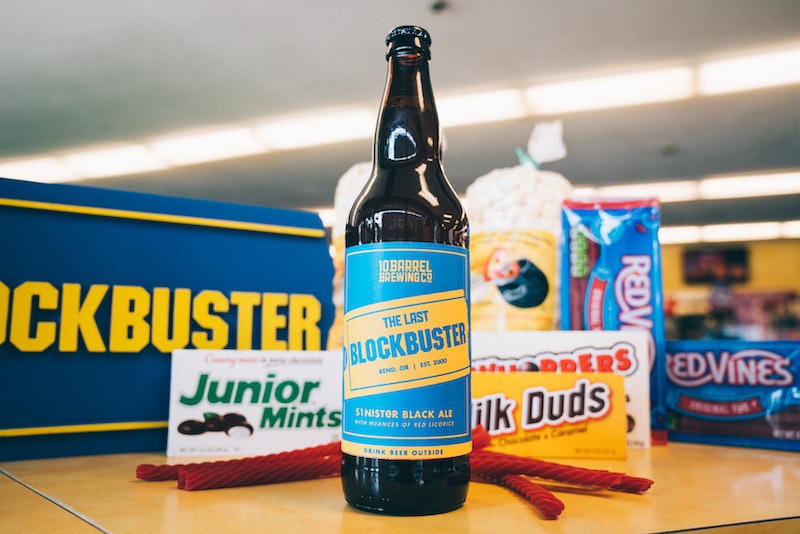 Break out the Red Vines, grab a box of Milk Duds, fire up the Jiffy Pop, and pop your favorite ‘90s flick in the VCR: Blockbuster is not dead — and it’s even got its own beer now. Called the Last Blockbuster, the beer is a collaboration between Bend, Ore.-based craft brewery 10 Barrel Brewing and the once-great home video rental giant. Lest that collaboration sound a little… uh… confusing, however, it actually makes a lot of sense: At this point in time, there is one remaining Blockbuster video rental store in the United States — and it, like 10 Barrel, is located in Bend. You’ll have to act fast if you want to try the beer, though; it’s not going to be around for long.

Bend has been home to a flourishing craft brewing scene since 1988, when Gary Fish opened the original Deschutes Brewery & Public House. Since then, Deschutes Brewery has expanded both to a much larger production facility in Bend and to an East Coast facility in Roanoke, Va. — and numerous other craft breweries have followed in Fish’s proverbial footsteps, 10 Barrel Brewing among them.

Founded by twin brothers Chris and Jeremy Cox in 2006, 10 Barrel has spent over a decade establishing itself as one of the best breweries not only in the Pacific Northwest, but in the world. (It took home a whopping 23 awards at the 2018 World Beer Cup, so, uh… well done there, 10 Barrel) The brewery was somewhat controversially purchased by Anheuser Busch in 2014, but despite concerns that the purchase would lead to the ousting of 10 Barrel’s talented brew team — Jimmy Seifrit, Tonya Cornett, Shawn Kelso, and Whitney Burnside — all four are still on board; indeed, the brewery has even expanded, now featuring a total of six brewpubs spread across four states.

Blockbuster, meanwhile… hasn’t fared so well. Originally launched in 1985 with just one video rental store in Dallas, Texas, the company grew rapidly throughout the ‘90s; by 2004, it had reached what would ultimately turn out to be its peak, employing 60,000 workers and operating 9,000 stores across the globe. By 2010, however, business had declined so much due to advancements in the home video market like Netflix and Redbox that the company filed for Chapter 11 bankruptcy protections. Stores began to close; not even an acquisition could save it. By July of 2018, Blockbuster store in the United States had shut its doors… except for one: The Blockbuster in Bend. It stands as a monument to nostalgia, one that both serves its local community and attracts tourists who still mourn the fact that they’ll never be able to “make it a Blockbuster night” again.

10 Barrel gets a kick out of the fact that the last remaining Blockbuster is located in their hometown, so in some ways, it’s perhaps unsurprising that the brewery and the video store would eventually find a way to team up. “We’re stoked to share the home of the last-standing Blockbuster,” said 10 Barrel co-founder Chris Cox in a statement provided to Bustle. “The 10 Barrel team is always up for a fun time, so when we found out that the Blockbuster store right here in Bend was one of the last few remaining in the country, we immediately thought to team up with them to brew something special. Blockbuster is a cultural icon and we couldn’t be more excited to celebrate over three decades of movie fandom with them.”

The Last Blockbuster is a black ale — an ale of American origin known for having the distinct aroma and tasting notes associated with both darker beers like stouts and porters and lighter, hoppier ones like IPAs, according to the Guardian — with the curious “nuances of red licorice,” per the brewery. Light bodied and with a smooth finish, it’s meant to pair with popcorn — specifically the ultra-buttery type you get at the cinema — and chocolate. (Excellent news if you’re the kind of person whose favorite movie theater snack is a box of Raisinets upturned into a tub of popcorn.) Even the beer’s label hits all the right nostalgia notes: Modeled after the iconic Blockbuster logo, it features the yellow silhouette of a VHS tape on a calming, blue background.

Alas, though, it will only be available for a limited time, and only in a few specific locations. On Sept. 21, 10 Barrel and Blockbuster will co-host a block party in Bend at which the Last Blockbuster will receive its official release; after that, the beer will be available at 10 Barrel’s brewpub locations for… well, probably as long as supplies last. That’s usually what “available for a limited time” means. For the curious, 10 Barrel has six brewpubs — three in Oregon (two in Bend and one in Portland); one in Boise, Idaho; one in Denver, Colo.; and one in San Diego, Calif.

It would figure that all of those brewpubs are located in places I am not, so unfortunately, I’m going to have to sit this one out. If you happen to live near one of them, though, do me a favor, why don’t you? Stop by, indulge in a Last Blockbuster, and let me know how it is. Bonus points if you write your review entirely in quotes from ‘90s movies. I assure you that I absolutely can handle the truth.