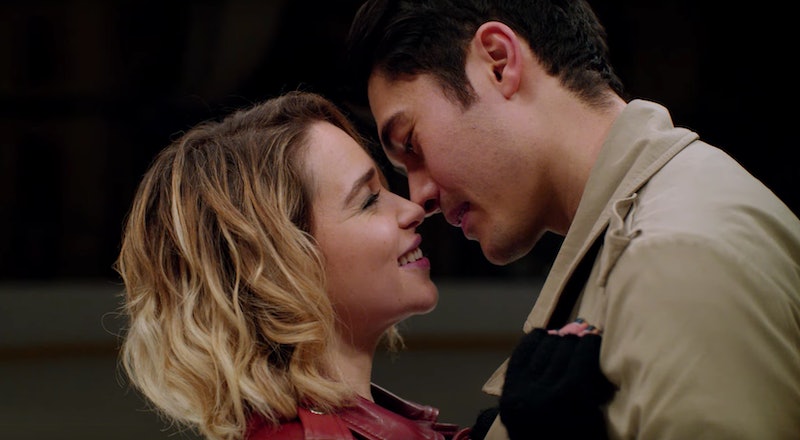 Deck the halls with boughs of holly! Oh hold up, one second. It's August. Why the heck am I breaking into Christmas songs? Well, because anyone who's anyone knows that all the entertainment buzz surrounding the most wonderful/entertaining time of the year kicks off around now. And even though I'm sure you're in no way ready to let go of summer, I'm also sure you're pretty hyped for all the excellent Yuletide viewing. And judging by the new Last Christmas trailer, this year is going to be an absolute doozy.

The film, which is inspired by the music of the late, great George Michael, has the kind of cast and crew involved that make you want to watch all the credits. The Christmas rom-com is written by Emma Thompson and Bryony Kimmings and, according to the Guardian, was being written when Michael was still alive, with his blessing. According to the Guardian, director Paul Feig has said of his new Christmas film:

"The great sadness is that [Michael's] not here to be a part of this, but he knew it was going to happen, and that gives me such joy. We feel like he's here with us."

Feig, who (fun fact) played Sabrina's science teacher in Sabrina The Teenage Witch, also directed Bridesmaids back in the day. So you know he's worth his salt.

If the minds behind the film aren't enough to satiate your entertainment needs, the cast will have you actually drooling.

Emilia Clarke is a professional elf who is fed up of her job as an elf in a Christmas shop, her life, and just generally over all of its ups and downs. It's on one of those blue days when her general fed-upness is peaking that she meets an impossibly handsome man, played by Henry Goulding. The pair seem to bump into each other all the time and as the forlorn elf gets to know the hunky stranger, things begin to change for her. Inspired by his volunteering efforts at a soup kitchen, she tries her hand at using her true passion, singing, to help raise urgently needed funds.

The film is set in London and the trailer shows lots of famous locations including Alexandra Palace, Covent Garden, and street art from famous London graffiti artist Stik.

The film is sure to garner a heck of a lot of fans owing to its incredible soundtrack. Because not only will it contain the classics from Michael, but also finish with a previously unreleased song. As Feig revealed during an interview with the BBC:

"One of our tracks is one of those songs, and it's just an absolutely amazing song that I'm so excited the world is going to get to hear now, It's a very celebratory song. And we were able to play the entire song, which is almost six minutes long, in the film."

The song's title is yet to be revealed but one thing that can be guaranteed is that hardcore Michael stans are going to be creasing with joy over it.