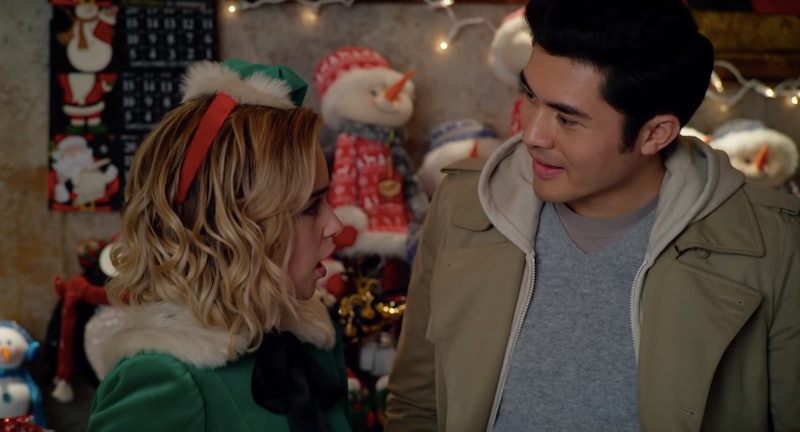 Major Last Christmas spoilers. If you heard that there is a twist in Last Christmas, you heard correctly. And if you guessed what it is based on the glaring clues presented to you... yep, it's that. It was announced long ago that the movie would be based on the Wham! holiday hit "Last Christmas" and that fact combined with a very suspicious trailer, meant anyone who even sort of thought about it knew what would happen in Last Christmas before even seeing the film.

First, let's just put it out there, so we all know what we're working with: Kate (Emilia Clarke) meets a man named Tom (Henry Golding) and he encourages her to live a more positive life and be kinder to herself and others. As they get to know each other, we find out that Kate had a heart transplant last Christmas, and we also find out that Tom is very, very strange and doesn't act like other living human. Well, that's because he's dead. Last Christmas, Tom died and his heart went to Kate, who was in need of a transplant.

Last Christmas he gave her his heart.

All of this was easy to guess — which many people did — after hearing the movie was based on the song and later, seeing the trailer.

But there was one simple way to avoid this.

When Last Christmas was first announced back in June 2018, the title was confirmed, but the connection to Wham! wasn't noted. Instead, the film, directed by Paul Feig, was described as "a holiday romance set in London," as reported by Variety. Then, in July 2018, co-screenwriter Bryony Kimmings told the Radio Times that the film, created in part by her co-writer Emma Thompson, was based on the Wham! song.

It was impossible not to wonder what that meant. It seemed clear that the movie would feature a love story, but, other than that, how would it specifically connect to George Michael's lyrics? Would it involve a large group ski trip?

Fast forward to April 2019, when Thompson strongly hinted at the big reveal after debuting the trailer at CinemaCon. According to Entertainment Weekly, Thompson said, "I was asked if I would like to write a story based on the song 'Last Christmas,' and I said no, not really, because I didn’t really like the song ... Then I thought of the lyrics, 'Last Christmas, I gave you my heart,' and I think I could think of something, and we spent seven years writing this story."

When the trailer was released to the public in August, the theories — namely, that Tom is dead — started rolling in. Not only does Tom not interact with anyone else in the trailer, but Kate is shown in a hospital. Classic ghost movie.

If we didn't know that the movie was based on the Wham! song, it could have worked. (It also would have helped if the song wasn't in the trailer. Let's just nix all references to Wham!) The film could have only been presented as a rom-com called Last Christmas, and the twist could have actually surprised viewers.

Plus, how much better would it be to sit down and suddenly realize your watching a movie based on the Wham! song? That alone would be a twist, and a far better one than what's actually in the movie.