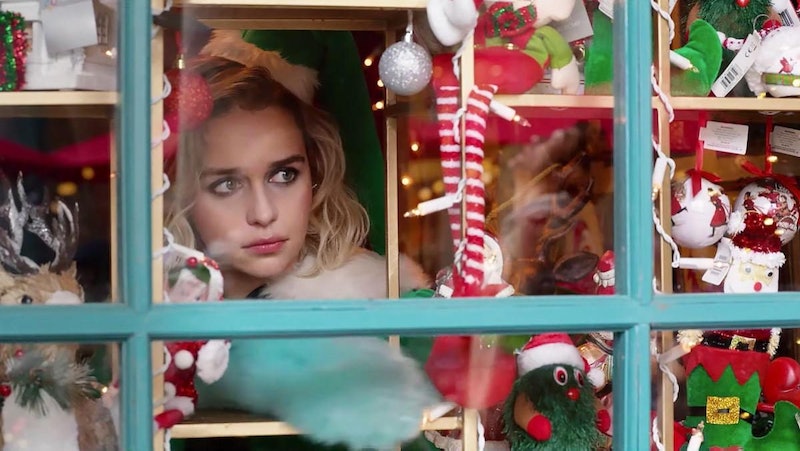 For those that saw the first trailer for Last Christmas and thought that this was just another holiday rom-com, think again. Twitter is already coming up with Last Christmas movie theories that will have you reaching for the tissues. This Christmas, you better be prepared to cry your eyes out, that is, if you believe these rather tragic twists that fans are already predicting.

The movie, directed by Paul Feig and named in honor of George Michael's Christmas classic, stars Game Of Thrones' Emilia Clarke as Kate, a disgruntled young woman working as an elf in a Christmas shop. She's having a hard time getting into the Christmas spirit Luckily, she runs into Tom (Crazy Rich Asians heartthrob Henry Golding), who seems to pop up magically, without warning, to bring her Christmas cheer. Perhaps, a clue that there is some holiday magic involved in this plot?

Fans sure think so. Many believe the trailer is teasing a major twist and, like good conspiracy theorists, they're trying to figure it out before the movie hits theaters Nov.l 15.

So here are some of the most interesting theories as they pertain to what many think is the inevitable Last Christmas twist. No surprise, all of these suggestions will leave you ugly crying through the holiday.

1. It's A Literal Interpretation Of "Last Christmas"

"Last Christmas, I gave you my heart," Michael sings on the 1986 track. Some think this may happen quite literally in Last Christmas. "Henry Golding is an angel," Twitter user @yeahyeahsam tweeted, "and Emilia Clarke received his heart in a transplant when she was sick."

2. Golding Is A Spirit From Christmas Past, Quite Literally

Twitter user @jessiepeterson, who came up with a few different theories about the movie, thinks it's possible Golding is a "literal spirt of Christmas" who shows up only around the holidays to help those in need. But, perhaps, he finds Kate because she works for Michelle Yeoh's character, who also happens to be his mom. Perfect casting, too, since she also played Golding's mom in Crazy Rich Asians.

The clues all seem to line up, according to Vox writer Alex Abad-Santos. "Henry Golding doesn't speak to anyone but Emilia Clarke in that trailer," he wrote. "He also wears the same outfit multiple times." Convinced?

Throughout the trailer, Kate talks about how she "nearly died," but @nerbitches wonders if Golding might also be sick. Their guess is that Tom knows this is his last Christmas, but ends up falling in love with Kate only to die. "Turns out his heart was the perfect match for Emilia," they wrote. "She wakes up and he is gone but she now has his heart."

What if Kate doesn't have Tom's heart, but his wife's? Ah, yes a classic rom-com-esque twist—ever see Return To Me with Minnie Driver?—that could explain why Tom is so interested in getting to know Kate.

6. Tom Is A Rule-Breaking Angel

According to @lizissadmad, Tom could be an angel who has come down to help Kate's last Christmas go smoothly. "But he falls in love with her and breaks the rules to help her live," they write. Breaking the angel code sounds like an ending that could result in happy tears, right?

Yes, based on the lyrics, many think that Golding is an "organ donor and she ended up with his heart," just as Michael's lyrics predicted.

If this is true, writer Jenna Guillame had one request. "I very much hope that if it is this plot he's, like, an angel/ghost the whole time and not a human she falls in love with who subsequently dies in the movie." Agree, no one has enough tissues for that sort of thing.

Don't mess with our fragile hearts too much, Last Christmas, there's only so much tragic romance we can take!