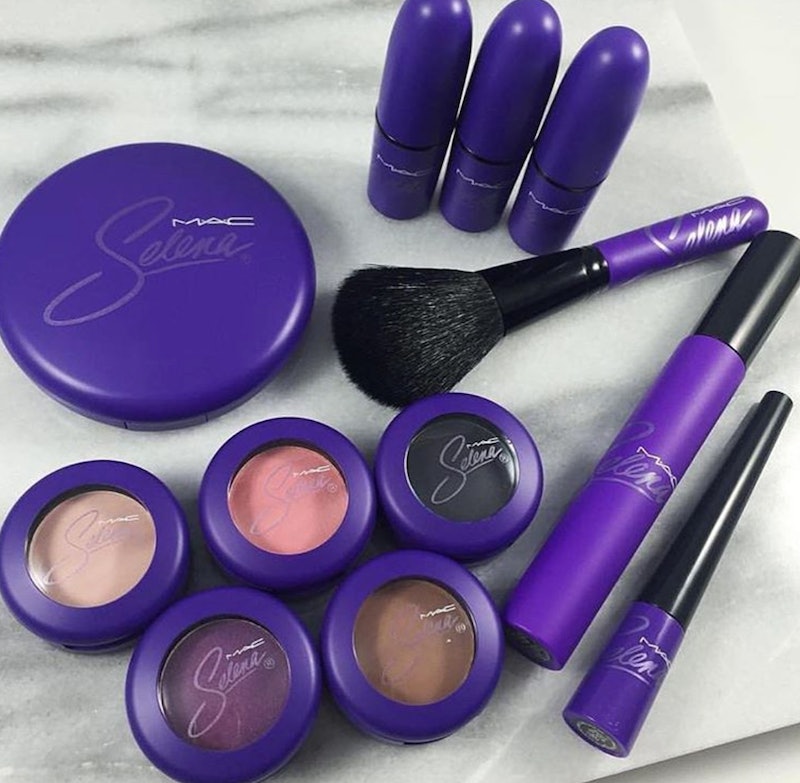 From start to finish, the MAC x Selena collection has been a rollercoaster story. You probably know the drill by now, judging by the huge amounts of press this collection has collected, but if you're just now emerging from Rock City, fans fought for this collection and won. It sold out immediately. People were ready to pony up about $3000 on eBay to get in on the action. MAC brought it back (sorry, anyone who spent $3000). And now, we're left to wonder: When is the last date to shop MAC x Selena? Get it while you can, because it's not far off.

According to the brand's Instagram, fans only have until Jan. 31 to shop the Selena collection at MAC stores and counters in the U.S. and Canada. One week, my friends, to grab the purple-packaged lipsticks, shadows, brushes and blush before they're all gone for good. There's no word on how much stock is left and if counters will keep selling it until it's gone (or strictly stick to the Jan. 31 end date) but there's a definite sense of finality to M.A.C.'s Instagram announcement. I'd suggest you don't leave things to chance.

What's worth picking up? All of it. But failing that, here's a run-down of the Selena goods to know.

MAC Selena Lipstick in Dreaming of You, $18, Nordstrom.com

Brick red Dreaming of You is the '90s-centric maroon iconic to the collection.

Fire-engine red Como La Flor is the classic Selena-daring color, made for shimmying.

Amor Prohibido, a pinky nude, will be a good way to describe feelings post-Jan. 31.

MAC Selena Eyeshadow in Is It The Beat, $17, Nordstrom.com

Replace the collection's long gone Boot Black liner with Is It The Beat for a softer, smoky liner look.

MAC Selena Eyeshadow in No Me Queda Mas, $17, Nordstrom.com

No Me Queda Mas is a romantic tawny terracotta .

And vivid purple Selena was made for the DGAF diehards.

Continuing on the DGAF theme, channel the frost of the '90s and early aughts with Bidi Bidi Bom Bom.

Brush with greatness (eh) with the catchily-named 129SH Powder/Blush Brush.

The upside: If you miss this, at least you'll always have the beat.