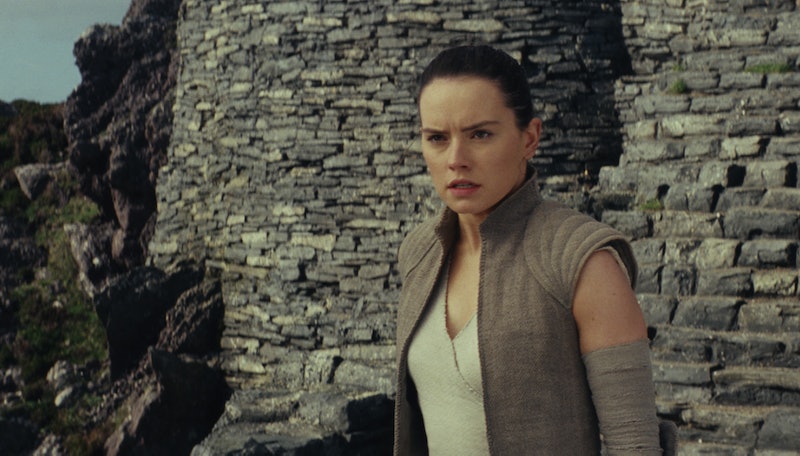 Spoilers ahead for Star Wars: The Last Jedi. When Star Wars: The Force Awakens was released in 2015, it marked a major, applause-worthy change: for the first time in the franchise's history, a Star Wars movie had a woman as its main hero. Daisy Ridley's Rey captivated audiences with her power and bravery, and it was a true joy to see her conduct lightsaber battles and command allies just like several men in the series had done before. But there was a downside: like many franchises, The Force Awakens still suffered from the "lone female hero" trope, with Rey as the sole prominent woman leader in a gaggle of men. It's a situation seen far too often, but thankfully, the next Star Wars movie, the just-released The Last Jedi, doesn't keep the trope alive. Instead, the new movie gives leading roles to several women, making for a movie that's filled equally with male and female leaders.

First and foremost, there's Rey. Like in The Force Awakens, the former scavenger has a major role in The Last Jedi, with her story arc mostly based around her relationship with Luke and her search for answers about her parentage. Rey is undoubtedly the main character of these new Star Wars movies, and she has the biggest presence in the film of any person. But unlike the first film, The Last Jedi doesn't surround Rey with only men. This time, there is Kelly Marie Tran's Rose, a low-level Resistance member who teams up with Finn to stop the First Order, and Laura Dern's Vice Admiral Holdo, a Resistance officer put in command after Leia gets injured. And of course, there's Carrie Fisher's General Leia, who, despite being sidelined for much of the movie, has several scenes showcasing her power and command among the rebels.

Of course, Leia was present in Force Awakens, as were Gwendoline Christie's Captain Phasma and Lupita Nyongo's Maz Kanata. But in that movie, those women were mostly background characters, not protagonists; Rey was the only one with serious screentime, sharing the movie with men such as Kylo Ren, Poe Dameron, Han Solo, and Finn. Not Last Jedi, though — in this movie, Rose has a significant role, leading the action-packed B-story alongside Finn. And Holdo has a large amount of scenes, including one great one with Leia, where the two women share an emotional exchange. The sight of two powerful female characters, discussing strategy and sacrifice together, is truly something special to behold. And it's made even more meaningful knowing that they're surrounded by other women leaders, all of whom get their own time in The Last Jedi to shine.

The fact that The Last Jedi has a good number of major female characters shouldn't be extraordinary; it's an ensemble movie, after all, so doesn't it just make sense that many of its characters would be women? Unfortunately, though, it wouldn't have been a surprise at all if the film kept Rey as its only real heroine. Many ensemble movies and TV shows, especially those in the action and sci-fi genres, do suffer from the "lone female leader" trope like Force Awakens did. There's Jumanji: Welcome to the Jungle; the Now You See Me movies; New Girl on FOX; Marvel's The Defenders; even the Harry Potter series (at least in the movies — book Ginny, forever). And those are just the first ones that come to mind. In far too many otherwise male-dominated movies and shows, there's one lonely woman thrown into the mix, there to inject a dose of feminism and, more often than not, romance and sex appeal.

The Force Awakens, luckily, didn't make Rey, as the sole main woman, become a romantic interest to any character or wear clothes far more revealing than those of her male peers. Even still, it was hard not to be struck by the number of men that surrounded her in any given scene — which is why what The Last Jedi does feels so damn good. No longer is Rey the only main lady representing in the Star Wars world. She has company, in the form of several badass, complicated, compelling female characters, all of whom contribute to an equal gender balance throughout the film.

Perhaps this progress is due to the number of women working behind-the-scenes of Star Wars; in addition to Kathleen Kennedy, the president of Lucasfilm, there's also the SVP of Development, Kiri Hart, who had a major role in hiring women to help create The Last Jedi's story and characters. Slowly but surely, the Star Wars universe is getting more equal when it comes to gender, and that's being reflected on the number of women that are being portrayed on-screen, as well as the way their storylines are handled. In The Last Jedi, the Force is with the women — and that seriously couldn't be better news.