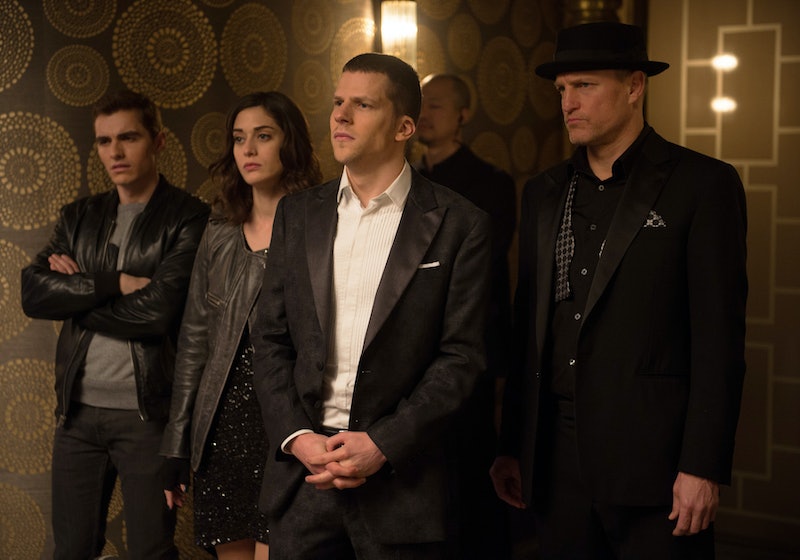 As its posters imply, Now You See Me 2 makes one big point clear early on: in a room full of men, there is only room for one woman. In the original 2013 movie, the story followed the Four Horsemen, three men and one woman, all magicians who robbed the rich and gave to the needy, and in the new sequel, the Four Horsemen are still three men and one woman — only Henley, the original female member, is nowhere to be seen. Instead, Now You See Me 2 trades Henley for a new woman, Lulu, who, not-so-coincidentally, is the only female character onscreen for a majority of the movie. The fact that Now You See Me 2 replaced one woman with another, while populating the rest of the movie with male characters, is distressing — and indicative of a bigger gender problem in Hollywood.

In the new movie, Jesse Eisenberg, Dave Franco, Woody Harrelson, Mark Ruffalo, Michael Caine, and Morgan Freeman all return, reprising their roles as master magicians and villains. The only actors in the main cast not returning for the sequel are the women: Isla Fisher and Mélanie Laurent. Fisher, who starred as Henley in Now You See Me, allegedly didn't reprise her role because she was pregnant at the time of shooting, according to a report from Movies.com. As for Laurent, it's unclear whether or not she was asked back or chose not to return. Regardless of how or why the actors left the franchise, both women have been replaced in the new movie: Fisher by Lizzy Caplan, who joins the Horsemen as Lulu, and Laurent by Sanaa Lathan, who takes over Laurent's role as a sympathetic FBI director Natalie Austin.

In the film, Henley's disappearance from the group is brushed aside, with characters mentioning that she had decided to leave their life of crime for greener pastures. In light of Henley's departure, Dylan (Ruffalo), the behind-the-scenes leader of the Four Horsemen, recruits Lulu to join the group because, according to him, a testosterone-filled magic act just isn't as fun to watch. And Lulu seems to understand her placement in the group; "I'm the girl Horsemen!" she yells at her dumbfounded new friends when Dylan introduces her to the other three Horsemen.

A line like this confirms the film's subliminal message that only one woman can be allowed in the group — or a major Hollywood movie — at a time. Screenwriter Ed Solomon, director Jon M. Chu, and the film's producers seem to have anticipated that audiences might not react too kindly to one female character being unceremoniously replaced by another woman, and so the "I'm the girl Horsemen!" quip is played for laughs, a moment of self-awareness engineered to make viewers forget how distressing that sentiment is. It's a funny moment, made easy to swallow by Caplan's carefree charm, but it's also a sad one. Fans have the right to be upset at the fact that a movie full of men switched out one woman for another for no obvious reason, but apparently, filmmakers think that joking about that issue gives them a pass from adding in more female characters and solving that problem.

Lulu's presence as "the girl Horsemen" is welcome, and, who knows, perhaps it was Fisher's choice not to return to the franchise. But, here's the thing: regardless of why or how it was decided that Henley wouldn't be a part of the Horsemen anymore, Now You See Me 2 could have added more women to the group easily, yet the filmmakers chose not to. Instead of hiring Daniel Radcliffe to play new villain, Walter Mabry, why not hire a woman, instead? Instead of bending over backwards to (spoiler alert) have Woody Harrelson play identical twins, why not make his twin a woman? These are supporting characters, yes, but they also increase the male presence in the film significantly, making it even more painfully obvious that Lulu is so often the only woman onscreen.

It's even more distressing considering how few roles there tend to be for women in movies overall. A 2014 study led by the Media, Diversity & Social Change Initiative at USC Annenberg found that only 30% of speaking roles in the 700 top-grossing films of 2007-2014 were women's roles — and only 12% of protagonists in those 700 films were female protagonists. With statistics like these, it's no wonder some women in Hollywood have said that they're willing to work for lower salaries than their male counterparts. There are simply fewer parts for women than men in Hollywood, and every film that refuses to create more roles for women, especially meaty ones, contributes to the Hollywood pay gap and, sometime, enforces sexist stereotypes.

Just look at Now You See Me 2: after Natalie and Lulu, the only other woman of note is Bu Bu (Tsai Chin). Bubu, like Natalie, is in a position of power (in ways I won't spoil here), but her character is kept on the sidelines. Natalie and Bu Bu only appear in a couple of scenes each, and their dialogue is mostly inconsequential. It's almost as if the characters simply exist to give Now You See Me 2 the appearance of having more than one real female character, instead of adding anything of value to the story.

There is a moment in the film when Freeman's character, Thaddeus Bradley, says, "Magic is about controlling perception." Well, film works the exact same way, and the forgettable side characters and "girl Horsemen" line are not enough to control audiences' perception of the gender disparity in Now You See Me 2.

More like this
At 14, Tatiana Maslany Was Obsessing Over Tamagotchis & The Spice Girls
By Gabrielle Bondi
Jonah Hill Explains How His Anxiety Attacks Will Change The Rest Of His Career
By Grace Wehniainen
Here’s Where Manti Te’o Is Now
By Arya Roshanian
Florence Pugh Won’t Discuss Harry Styles Sex Scenes In 'Don’t Worry Darling'
By Grace Wehniainen
Get Even More From Bustle — Sign Up For The Newsletter