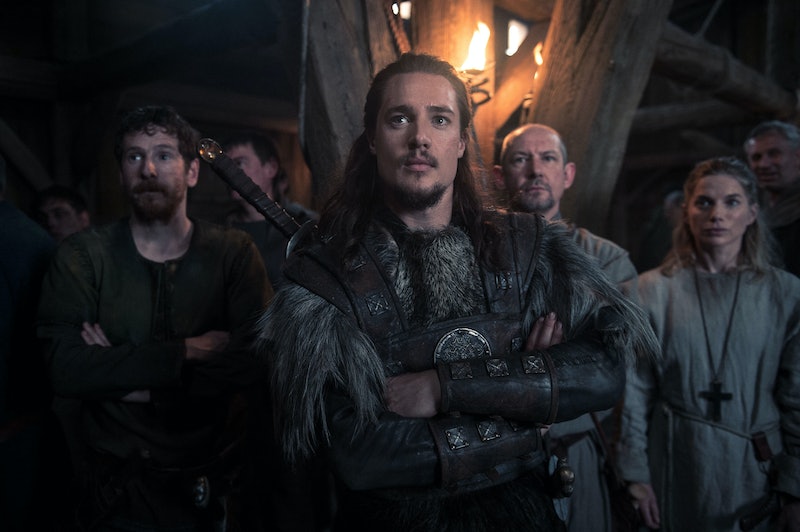 DESWILLIE/Netflix
By Kayla Hawkins
May 7, 2017

Game of Thrones really raised the bar for fantasy TV, with its commitment to blood splattering across the screen, sexual politics that seem right out of the Dark Ages, and a compelling group of characters that became instantly iconic. But the wave of shows that premiered after GoT are often just as good as the original. For instance, there's the BBC Two/Netflix co-production The Last Kingdom, which premiered its second season on the streaming service on May 5, just after the series wrapped airing in the UK. The Last Kingdom Season 3 might not be a concern for many American viewers yet, but for those who simple can't help but binge an entire season in just a couple of days, the news can't come soon enough.

Netflix, unsurprisingly, has not announced whether the series will be coming back for Season 3. Keep your eyes out for an announcement in the weeks and months after the second season takes the internet by storm. Once the determination is made, however, the curiosity doesn't end there. Because if The Last Kingdom does return for a third season (which you can probably expect in about a year), what will it be about? Given that the show hasn't been renewed yet, there are no casting announcements or set photos to go by.

Even though Netflix has remained tight-lipped, there are a few different ways to get a little hint at what could come next on The Last Kingdom. There's history, of course. The Last Kingdom is based on the Danish invasion of the British Isles in the 10th century. Series protagonist Uhtred of Bebbenburg is a fictional character, but he is loosely based on two real figures: Uhtred the Bold, 10-year ealdorman (a high-ranking official) of Northumbria, who commanded from a fortress at Bamburgh, and Uhtred of Derbyshire, another ealdorman of an earlier period. The Last Kingdom's Uhtred could command armies, betray the king, and negotiate with nobles just like his real-life inspirations, if Netflix so chooses.

But the series is more closely based on a series of books, the Saxon Stories by Bernard Cornwell, which fictionalizes history. Like the Song of Ice and Fire series, Saxon Stories is still ongoing, but with only two seasons so far, The Last Kingdom still has plenty of new material to mine for future episodes. The first two seasons were based on the events of the first four books, but there are six left — and without getting into spoiler territory that's too specific for Season 2, the fifth and sixth Last Kingdom books sound like they hold a lot more conflict for Uhtred and his unlikely ally, King Alfred. Cornwell's Book Five, The Burning Lands, and Book Six, Death of Kings, wraps up the history of Alfred. SPOILERS AHEAD From Cromwell's Death of Kings summary:

Death of Kings continues the story of Uhtred, this time through the tumultuous years which followed the death of Alfred the Great as two men struggle to inherit the crown of Wessex. Uhtred has to contend with betrayal, treachery and the largest army the Danes have yet assembled to conquer Wessex ... all brought to a climax in a winter battle fought in the fens of East Anglia.

So it sounds like in a possible Season 3, there could be a Game of Thrones-worthy shocking death scene for the King... but there's plenty of story left for additional seasons, should Netflix choose to renew this bloody historical drama.