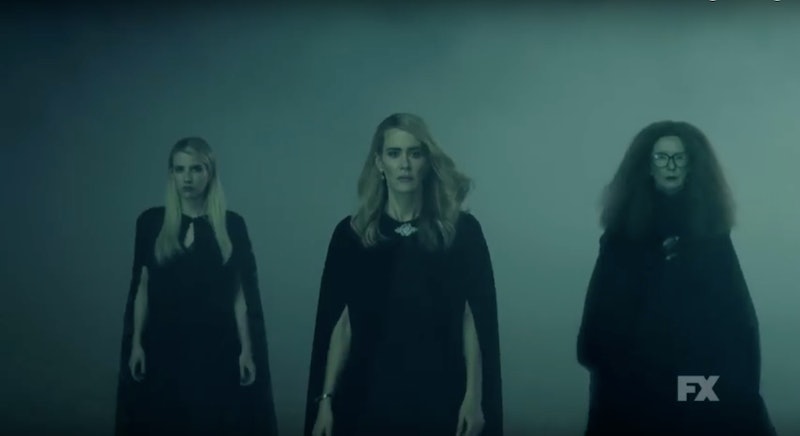 FX hasn't revealed too much about the premise of the upcoming season, and the conceptual artwork scattered across social media has only deepened the intrigue. Still, the trailer for the eighth season gives fans a better idea of the creepy characters who will be sowing chaos this time around. The trailer starts with someone, aptly following the Apocalypse title across the screen, saying, "It's the end of the world" as a private plane holding Dynasty diva Joan Collins looks like it's about to crash.

The trailer also weds two past themes together for the end of the world: Murder House and Coven. Fans will see some familiar faces, like the hair-raising faceless rubber man, Connie Britton, and Dylan McDermott, back in the show. Viewers especially bewitched by the Coven season have something to look forward to as well — Sarah Paulson, Frances Conroy, and Taissa Farmiga are also back, according to Deadline. Other AHS alumni who will make an appearance include Jessica Lange as Constance, Cody Fern as Michael Langdon, and Emma Roberts as Madison "I bet you thought you'd seen the last of me" Montgomery.

The eighth season of AHS will revolve around the mainstays Sarah Paulson, Evan Peters, and Kathy Bates, Variety reported. Newcomer Cody Fern, from Assassination of Gianni Versace, has joined the cast as Michael Langdon, the child of Tate Langdon and Vivien Harmon from the Murder House season. In the season finale's epilogue, viewers found out that Michael is the Anti-Christ, a likely central element for the end of the world to come in the upcoming season, Variety predicted.

Fans were thrilled with the trailer, and some of them guessed that the show's creator, Ryan Murphy, was too.

But for many, the most notable element in this particular season will be the 8-in-1 cast.

One fan was particularly excited about Lange's return, san wig.

But most are excited for the wide smattering of characters plucked from various seasons. In case you were wondering who exactly from the past is coming back, Rotten Tomatoes laid it all out.

And the most faithful of fans have already begun analyzing the details found in behind-the-scenes photos on social media. One Twitter user caught on to the interesting wardrobe choice made for Tate Langdon, using it to theorize a time travel trip to prevent the apocalypse.

In a cryptic tweet, the American Horror Story folks implied the trailer was only a taste of what the next day would bring, with many guessing the FX powers that be would release an even longer trailer to give fans a more solid idea of this season's storyline.

It seems the showrunners have pulled out all the stops for this season of American Horror Story, with different characters from different seasons getting tangled up with each other. But this season can't be the be-all-end-all of the show creators' imaginations; the show has been greenlit up until Season 10, so with any luck, Apocalypse can only be the means to an even more catastrophic end.