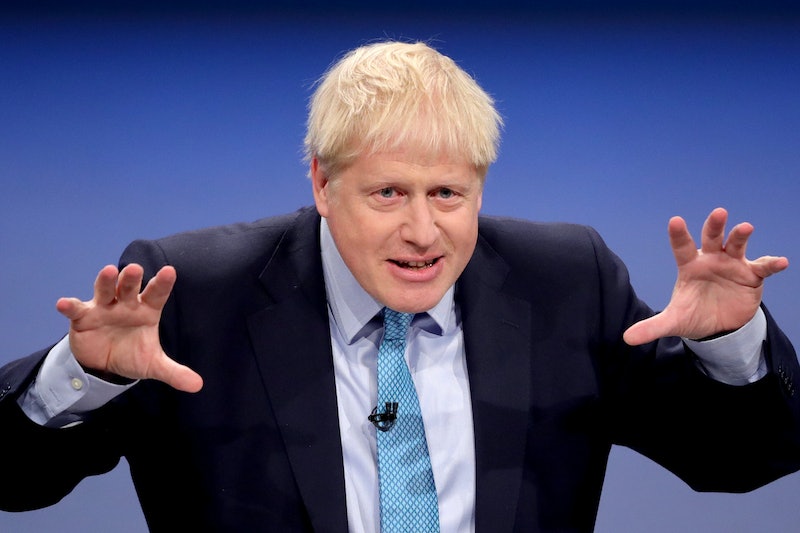 While it may be starting to feel like a bit of a pantomime, Brexit is very much real, and in the latest episode of “what's going on in government?” Boris Johnson has reportedly said he will challenge Queen Elizabeth to fire him before he agrees to resign. Let's dig into what that means exactly.

Right now, some MPs are trying to initiate the Benn Act, which will, in theory, block Johnson from being able to push through a no-deal Brexit on Oct. 31 and force him to extend negotiations if a deal isn’t reached by Oct. 19. However, as we all know by now, Johnson is determined to leave the EU at the end of the month come hell or high water, meaning there is "growing concern" that he will try and circumvent the Benn Act in some way, senior SNP MP Stewart Hosie told the BBC on Sept. 28.

If Johnson does indeed choose to ignore the Benn Act, he could face both "an instant legal challenge," as the Guardian explains, and a vote of no confidence. If the latter occurred, Johnson would have to step down, or else the Queen would have to step in.

However, reports emerged over the weekend that Johnson would "not stand aside if his proposals were rejected by Brussels and MPs tried to unseat him to avert a no-deal Brexit."

They Times also reports that "Boris Johnson will dare the Queen to sack him rather than resign as prime minister," and one senior figure even reportedly told the newspaper: "Unless the police turn up at the doors of 10 Downing Street with a warrant for the prime minister’s arrest, he won’t be leaving."

Another senior No. 10 source told The Sun: "Boris won’t resign even if he loses a no-confidence vote, and it is not within the sovereign’s constitutional powers to make him. The Lascelles Principles make this clear. The PM will advise the Queen of that and she must follow her Prime Minister’s advice. That’s how this country works."

The name Lascelles might sound familiar to fans of Netflix's The Crown. Alan 'Tommy' Lascelles was the secretary to four monarchs in Britain between 1920 and 1953. Firstly, he was private secretary to Edward VIII and, after that, King George V. He was then private secretary to King George VI and briefly to Queen Elizabeth II. In The Crown, soon to be on its third season, Tommy Lascelles is played by Pip Torrens who has appeared in a number of period dramas like BBC’s Poldark, The Iron Lady, and Pride & Prejudice. The character of Lascelles first appeared on The Crown in 2016.

According to the Newstateman, after the 1950 General Election, "Lascelles suggested that any monarch could reject a request by a prime minister to dissolve parliament for a new election on three grounds: 1. That the existing parliament ‘was still vital, viable, and capable of doing its job.’ 2. That an election ‘would be detrimental to the national economy.’ 3. That there was an alternative prime minister ‘who could govern for a reasonable period with a working majority in the House of Commons.’" But this was removed by the Fix-Term Parliament Act back in 2011, and the Lascelles Principles no longer applied. And, as Dr Catherine Haddon, a senior fellow at the Institute for Government, told iNews today, by trying to apply the Lascelles Principles in this case, "you are taking old an convention — which is no longer valid — and trying to apply it to a situation it is not related to." It remains to be seen what whether these principles will be proposed at any point over the next few days.

More like this
Watch Jacinda Arden’s Devastatingly Honest Resignation Speech
By Sam Ramsden
This Is When Netflix Is Going To Start Charging You For Sharing Passwords
By Darshita Goyal
Twitter Is Burning As Phoebe Dynevor Reveals Daphne’s 'Bridgerton' Exit
By Sophie McEvoy
'Boiling Point's TV Sequel Is Set To Deliver A “Rollercoaster Of Emotions”
By Catharina Cheung and Sophie McEvoy
Get The Very Best Of Bustle/UK
Sign up for Bustle UK's twice-weekly newsletter, featuring the latest must-watch TV, moving personal stories, and expert advice on the hottest viral buys.