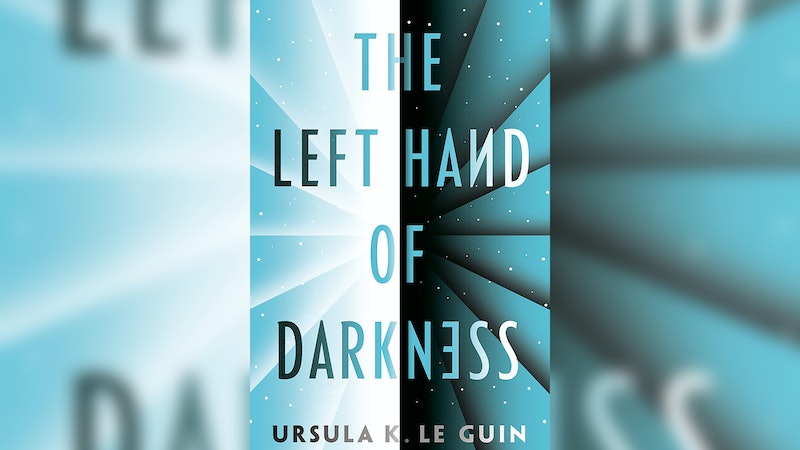 On the planet of Gethen, every individual has the ability to both sire and bear children. Given that everyone is faced with the same biological burdens, and the same choices, the world is free of sexual shame. There is no sexism, no privileged gender, no weaker identity. There are no double standards. There is no rape. No, this isn't a dream, although to many readers, it probably sounds like one. This is the fictional future author Ursula K. Le Guin, who passed away in Jan. 2018, imagined in The Left Hand of Darkness, an enduring feminist science fiction novel that asks readers to examine their assumptions about sex, gender, and our very binary world.

Published in 1969, The Left Hand of Darkness earned Le Guin the Nebula and Hugo awards, and helped establish her as one of the most important voices in science fiction. Fifty years after its first publication, Le Guin's transformative novel still has plenty of lessons left to teach.

Set several centuries in the future, The Left Hand of Darkness takes place on Gethen, otherwise known as Winter. On this fictional planet, inhabitants are ambisexual humans: individuals who are neither male nor female. For all but a few days a month, they are androgynes, only taking on the sexual attributes to mate and reproduce during kemmer. During this period, they can become sexually female or male, depending on their choices, relationships, and the context of their sexual encounter.

Without the restrictions of a gender binary on Gethen, it flourishes as a place without sexism, misogyny, and prejudice — but not one entirely without problems. Readers experience it, for the most part, through the eyes of two very different characters: Genly Ai, a human male from Terra sent to Gethen on a diplomatic mission by the Ekumen to recruit the planet into their growing coalition, and Therem Harth rem i’r Estraven, a Getherian and the Prime Minister of Karhide, one of Gethen's largest kingdoms.

On a planet with people and a culture so unlike his own, Genly struggles to understand the Gethenians and their genderless society. "A man wants his virility regarded. A woman wants her femininity appreciated, however indirect and subtle the indications of regard and appreciation. On Winter they will not exist," Genly writes. "One is respected and judged only as a human being. It is an appalling experience.”

But to Estraven, it is Genly's insistence that men and women are different that is appalling. Throughout the novel, he questions Genly's assumptions and pushes him to investigate why he holds the genders to different standards, different expectations, and even different levels of respect.

When asked about the need for the binary, Genly explains his — and maybe our own — dependance on it. "I suppose the most important thing, the heaviest single factor in one’s life, is whether one’s born male or female. In most societies it determines one’s expectations, activities, outlook, ethics, manners — almost everything."

A moment later, he confesses: "It’s extremely hard to separate the innate differences from the learned ones."

The truth is, so many gendered assumptions go unnoticed. They are just one of the millions of unconscious decisions, based on cultural conditioning, people make every day without batting an eye. But when confronted with The Left Hand of Darkness, those assumptions, those prejudices, come fully into the light.

Genly's inability to understand the ambisexual Gethenians breeds a mistrust in them, one that mirrors some people's mistrust in identities that defy the norm. When people don't adhere to traditional gender roles or follow what society has deemed acceptable patterns of behavior, society bristles.

But in the end, it is that very mistrust that puts Genly in the most danger. Held back from truly understanding the world and relationships around him, he finds his life at risk, and his only lifeline the very people he so thoroughly rejected.

He admits, “My efforts took the form of self-consciously seeing a Gethenian first as a man, then as a woman, forcing him into those categories so irrelevant to his nature and so essential to mine.”

In describing her novel, Le Guin called The Left Hand of Darkness as a “thought experiment.”

"I eliminated gender to find out what was left," she famously wrote of the book.

What was left was a world without sexual shame, without gender bias, without double standards, and without rape. What was left was a place where consent is the only choice, and where the biological burden of child rearing is shared. It is a place where, according to Le Guin's novel, "Burden and privilege are shared out pretty equally; everybody has the same risk to run or choice to make.”