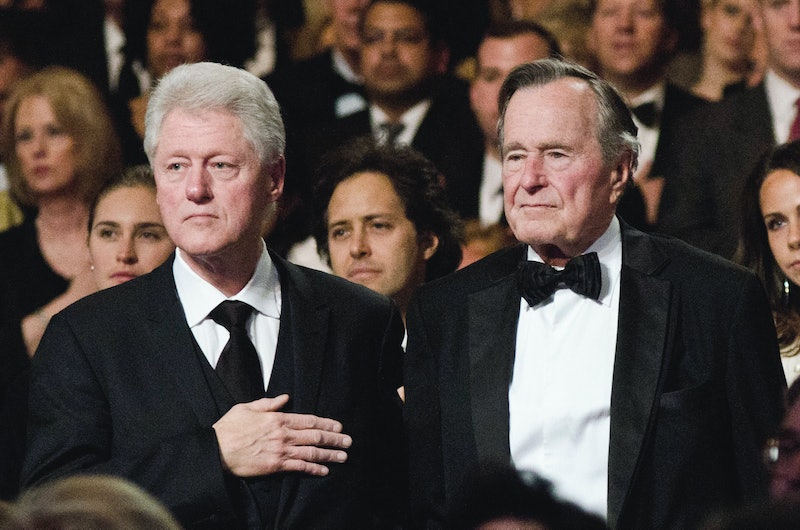 Late Friday night, news broke that the 41st president of the United States, George H.W. Bush, died at 94. Tributes and memories of the elder Bush circulated on social media, including the letter George H.W. Bush wrote to Bill Clinton when he left the Oval Office. The letter started going viral with social media users highlighting the letter's cordial nature between a Democratic and Republican leader.

Bush wrote that he hoped Clinton would find happiness in the Oval Office. "Dear Bill, When I walked into this office just now I felt the same sense of wonder and respect that I felt four years ago," Bush wrote. "I know you will feel that, too. I wish you great happiness here."

The 41st president also tried to prepare his successor for the criticism that would be leveled at him during his presidency. "I never felt the loneliness some Presidents have described. There will be very tough times, made even more difficult by criticism you may not think is fair," he wrote.

Bush said he wasn't "a very good one to give advice," but told Clinton that you can't let critics "push you off course."

By the time Clinton would read the letter, he was inaugurated. "You will be our President when you read this note. I wish you well. I wish your family well," Bush wrote. "Your success now is our country's success. I am rooting hard for you. Good luck, George."

The letter touched Clinton, who wrote about his relationship with the elder Bush president in an opinion piece for The Washington Post on Saturday morning. Clinton called their friendship "one of the great gifts of my life."

"No words of mine or others can better reveal the heart of who he was than those he wrote himself. He was an honorable, gracious and decent man who believed in the United States, our Constitution, our institutions and our shared future," Clinton wrote of that letter and his friend. "He also had a natural humanity, always hoping with all his heart that others' journeys would include some of the joy that his family, his service and his adventures gave him."

Bush and Clinton maintained their friendship throughout the years, where they most recently made headlines when Bush received a service dog named Sully during one of Clinton's visits to Kennebunkport, Maine. "From Indonesia to Houston, from the Katrina-ravaged Gulf Coast to Kennebunkport — where just a few months ago we shared our last visit, as he was surrounded by his family but clearly missing Barbara — I cherished every opportunity I had to learn and laugh with him," Clinton wrote, adding, "I just loved him."

Clinton said that he admired Bush's bipartisanship. "Given what politics looks like in America and around the world today, it’s easy to sigh and say George H.W. Bush belonged to an era that is gone and never coming back — where political opponents are not our enemies, where we are open to different ideas and changing our minds, where facts matter and where our devotion to our children’s future leads to honest compromise and shared progress," Clinton wrote.

But he thinks Bush would want to return to an era of bipartisanship and cordialness in politics. "I know what he would say: 'Nonsense. It's your duty to get that America back,'" Clinton wrote.