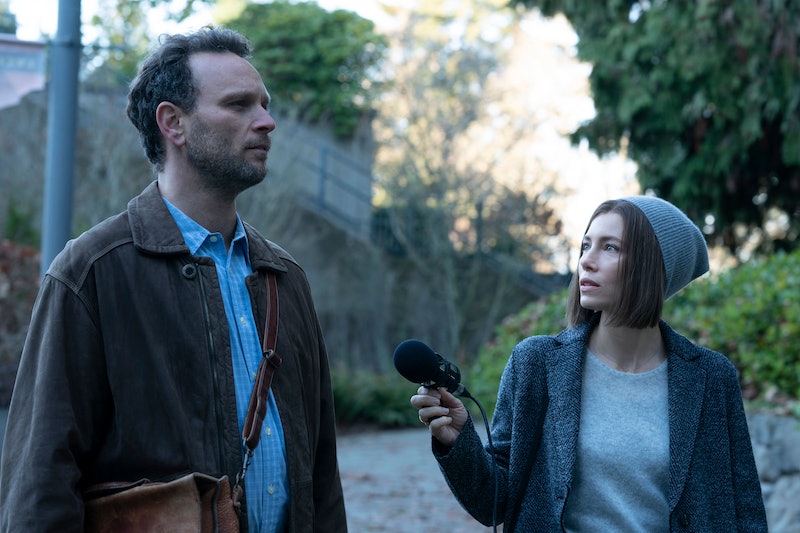 Limetown was eerie enough when it was just a podcast, but the Facebook Watch series of the same name amps up the creepy-factor in a pretty major way. New fans to the story who are digging the jump scares in the Jessica Biel-led thriller don't have to listen to the Limetown podcast to appreciate the show — it very much works on its own — but there are some minor differences that still make it worth adding to your podcast queue.

The podcast, written and directed by Zack Akers and produced by Skip Bronkie, was released in the summer of 2015 by twosome Productions and was the number one podcast on iTunes just two months later. A second season of the podcast was released on Oct. 30, 2018 and you can listen to both of them on iTunes, Spotify, and Stitcher at the moment. Since the the podcast is narrated by a young woman working for American Public Radio, many people compared it to Serial when it was first released and didn't realize that it was a fictional story.

That this is a work of a fiction is much more evident in the series, but it still focuses on Lia Haddock, the fictional journalist in the podcast, as her life is consumed with the investigation of the disappearance of the 326 residents of Tennessee neuroscience research facility Limetown on behalf of APR. Much like the Facebook Watch series, each episode of the podcast focuses on flashbacks to Limetown in the form of interviews with survivors, researchers, or other people who were connected to the town.

The main difference between the two works is that while the podcast let listeners into Lia's world a little bit, mostly through details of Lia's relationship with her uncle, the television show adds more details to Lia's backstory and current day to day life with the help of additional supporting characters.

There are other departures from the source material as well. The first two episodes of the Limetown television series line up almost exactly with the first two episodes of the podcast. The biggest difference, structurally, is that they switch up some of the cliffhangers to make them happen in earlier in the Facebook Watch series, which helps with the pacing of the story onscreen.

The Limetown television series is also peppered with flashbacks to a young Lia, helping to flesh out the relationship with her uncle (Stanley Tucci) in more detail than was done in the podcast. The series also goes into the behind-the-scenes drama of producing an investigative journalist podcast, like deadlines, budgets, or bickering with editors. There are also some scenes that suggest Haddock's need to record things is compulsive and unethical, like when she records herself having sex with a woman and masturbates to it later. These insights into Lia's character weren't in the podcast at all.

However, the draw of the television adaptation is really to see the surreal experiments described in the podcast brought to life. The flashbacks to a pre-disappearance Limetown, wild experiments and all, are not for the faint of heart, but definitely worth checking out if you just could not get enough out of the podcast. And vice versa.

However you were introduced to the story, both the podcast and the Facebook Watch series are worth watching for Limetown fans to get the full experience of this eerie tale.