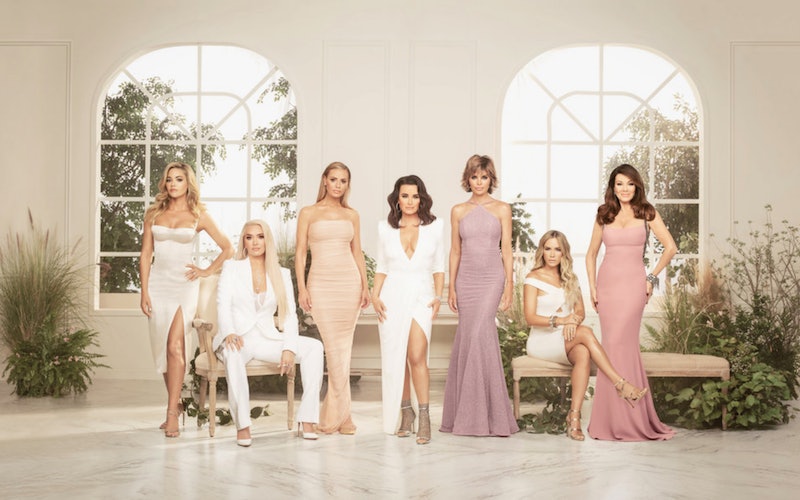 If you have indeed watched The Real Housewives of Beverly Hills trailer that dropped at over at People on Thursday, but you don’t feel lightheaded right now? Well, I hate to break it to you, but you must've watched a different video. The first look at RHOBH Season in an exhilarating, emotional whiplash-inducing, and outstanding peek at what’s in store for us when the show returns on Feb. 12, and I'm literally on the floor right now. I don’t even know where to begin with this trailer. Maybe at the beginning? That seems like a solid move.

The preview starts with dramatic voiceover and dramatic headlines that hint at the fallout between Lisa Vanderpump and her RHOBH colleagues. “The real story is even more crazy,” the trailer tells us. “Epic. Unbelievable. Shocking.” You are at the edge of your seat. Your seat is on pins and needles. The pins and needles have butterflies in their stomachs. And then, the tone shifts.

We see Ken Todd pop a bottle of champagne and let out a yelp of joy. Kyle zips down an empty street in a go-kart. One Housewife runs away from one of Vanderpump’s swans. Dorit says she really feels like she’s in Europe when she’s in Europe. Classic Beverly Hills Housewives mischief and mayhem. You exhale.

There’s a wedding. There is another wedding. There’s LVP telling Dorit her hairstyle reminds her of one of her many dogs. There's Rinna dressed up like Erika and patting the you-know-what. You've already watched 90 seconds of this two-and-a-half minute trailer, and so far, things have been pretty chill. You exhale again and think maybe the drama won’t be so intense after all. You start to relax.

But then, the trailer turns into a dark ride-style carnival attraction, zipping past one intense tableau after another. Camille and Rinna argue about the Brett Kavanaugh and Christine Blasey Ford hearing. Camille tragically loses her home in a wildfire. Erika seemingly suspects Kyle and Teddi are in cahoots about something. Ken growls “Goodbye, Kyle” at Kyle after calling her a liar. LVP goes all Real Housewives reunion on her co-stars and brings out the screengrabs of text messages. Dorit snarls that someone is a “little snake.” Erika says something is "not friendship, it's bullsh*t." LVP tells Dorit she loves her, Dorit asks LVP how she can say that, and LVP replies, “Well actually, I don’t.”

I am still on the floor. It'll be a while before I leave the floor. Hey, maybe I'll clean my baseboards while I'm here. My apartment thanks you, RHOBH.

More like this
RHOP’s Robyn Dixon Explained Why Juan Paid For Another Woman's Hotel Room
By Brad Witter
Everything To Know About 'RHONY' Season 14
By Jake Viswanath, Alyssa Lapid and Brad Witter
Erika Jayne's Estranged Husband Tom Girardi Has Been Indicted On Fraud Charges
By Jake Viswanath
'RHOSLC’s Heather & Whitney Are Still On A “Friendship Break” After Season 3 Reunion
By Jake Viswanath
Get Even More From Bustle — Sign Up For The Newsletter
From hair trends to relationship advice, our daily newsletter has everything you need to sound like a person who’s on TikTok, even if you aren’t.