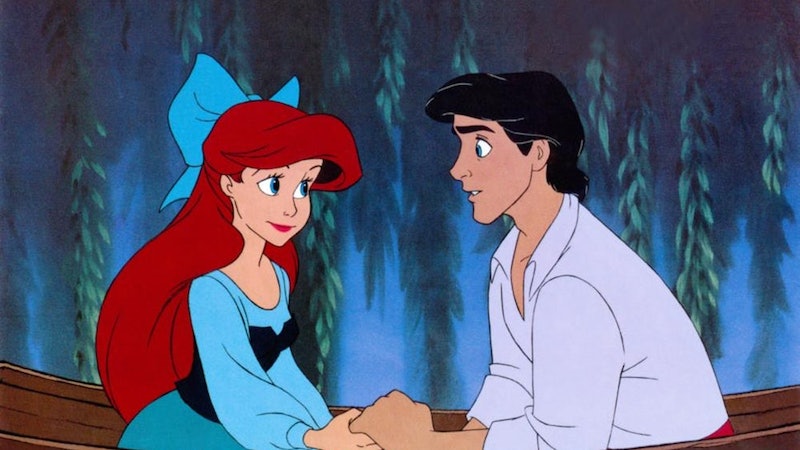 Unless you have been living deep in an undersea grotto somewhere, far from Twitter's relentless reach, you have probably heard by now that Disney will be remaking The Little Mermaid as a live action film. (And if you have been living among the gentle seafolk in a Twitter-free grotto — do you have room for me?)

It was inevitable that Disney would resurrect The Little Mermaid at some point, and that people on social media would have opinions about it. But when it was announced that talented young R&B singer Halle Bailey will be playing Ariel, the internet promptly lost its mind. Most people were excited at the prospect of an Ariel who can, you know, sing. Some were already huge fans of Bailey. And racists everywhere threw a hissy fit, whining that Ariel must be a pasty cartoon redhead because it is more "accurate" to the Danish source material.

Of course, the idea of a mermaid being portrayed "inaccurately" is supremely silly on its face because, no matter what the History Channel tells you, mermaids don't exist. And, of course, there are Danish people of all different races, skin tones, and hair color. But let's be real here: the people (and Twitter bots) crying over The Little Mermaid casting don't care about being "accurate" to Hans Christian Andersen's original story. If they did, they would be up in arms about the fact that Ariel's grandmother has been transformed into a anxious crab, that her sisters never even drown a single sailor, and that the titular mermaid gets the boy in the end instead of losing him in a tragic metaphor for Andersen's own doomed love life.

So what's the real story behind The Little Mermaid? Why did Andersen write it in the first place? And how "accurate" is Disney's version when it comes to the things that really matter?

The real Hans Christian Andersen was a brilliant storyteller and an anxiety-ridden mess. His literary hero Charles Dickens once found him weeping face down in the front yard after receiving a bad review. He was so afraid of being buried alive that every time he went to sleep, he reportedly left a note to clear up any confusion. And he was famously, terrifically unlucky in love.

If you've ever read any of his fairy tales, this won't come as a surprise: Many of them deal with themes of unrequited desire and romantic longing, before the poor little mermaid, toy soldier, or bluebird protagonist has its heart broken and usually dies a grisly-yet-poetic death in the process.

Andersen didn't quite die of a broken heart, but he did fall madly in love several times over the course of his life, and he never had his feelings reciprocated. He seems to have fallen in love with both men and women, and based on his journals, many scholars believe that he might have been biromantic and asexual.

Andersen appears to have fallen hard for a man named Edvard Collin. And even the scholars who insist that male friendships were just "much more affectionate" back in the day have to admit that Andersen's letters to Collin went far beyond platonic:

"I long for you, yes, this moment I long for you as if you were a lovely girl…No one have I wanted to thrash as much as you…but neither has anyone been loved so much by me as you...

My sentiments for you are those of a woman. The femininity of my nature and our friendship must remain a mystery."

Collin did not return Andersen's feelings, however, which "caused the author much suffering," in Collin's own words.

Andersen wrote The Little Mermaid upon the news of Collin's marriage. The original story is more of a tragedy than a romance: Here is the mermaid, longing for a life in the sun, but forever trapped in the murky depths of the sea.

Instead of a Disney musical full of culturally non-specific ocean life (is it set in Scandinavia or the Caribbean? Who knows! Who cares!), Andersen's short story is a dark, existential mind-freak. The nameless mermaid has a statue of a cute boy, just like movie Ariel, and she has a dad and sisters and a Sebastian-esque grandma. She falls for a bland-but-sexy prince, saves him from drowning, and swaps her voice with a sea witch to get a pair of legs — so far, so good.

But Andersen's mermaid has her tongue literally cut out, and she finds it exquisitely painful to walk on land. Each step is like knives in her brand new feet. She also has higher stakes than movie Ariel: If she can't get the prince to fall for her, she will die and dissolve into sea foam. If she can win his love, she will be gifted an immortal soul.

Unfortunately for the small mermaid, though, the original prince is a lot more politically-minded than Eric: He thinks she's hot, but he has to marry a princess because he's, y'know, a prince. So he marries another girl, and the mermaid has to watch and dance at his wedding.

Her mermaid sisters convince the sea witch to let Ariel live as a mermaid again if she murders the prince in his sleep, but she refuses and decides to just die and be sea foam instead.

That was Andersen's original ending, at least, but he later amended it so that the mermaid doesn't quite die: Instead, she is saved by air elementals, who tell her that as a reward for not murdering anybody in their sleep she can be an air-maid (with a voice!) instead, and eventually she'll get soul and get to join humanity for real.

So Disney's version is... pretty different. As with all Disney fairy tales, there is 100% less tongue-mutilation and a made-to-order happy ending.

But on the other hand, Andersen's story is more than it seems. Sure, like Ariel, his mermaid gives it all up for a cute, dead-eyed boy. But she doesn't just want the prince, she wants a soul. And in the story, having a soul is pretty synonymous with becoming a full, happy human being.

So the mermaid doesn't just want one particular guy, she wants to belong. She wants to be able to come up from the depths and find acceptance without having to give up her voice, even if she's going to have to wait 300 years to do it. It's a story about queerness as much as it's about anything else. And Disney's take on the story may not be overtly queer, but Andersen might not have been so upset to see his mermaid get a happy ending. It's what he always dreamed of for himself, after all.

Is Disney's endless, CGI-fueled remake bender mostly just a soulless corporate cash grab? Yes, of course. It's Disney. That's their whole thing. But that doesn't mean that we can't find joy in their stories anyway. It's hard out here, folks. If photo-realistic lions acting out Hamlet brings you peace, then go forth and prosper.

And there is no joy in racist whining about "accurate" casting. The themes of Andersen's story are universal: the longing of an outsider who wants to belong, the importance of speaking with one's own voice, and the dream, however distant, of one day finding a happy ending —with or without a prince.